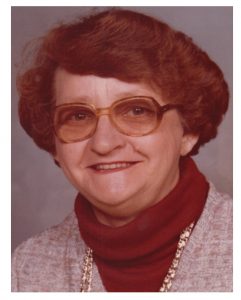 Jessilee Sanders was born November 23, 1927, in Myrtle, Missouri, the daughter of Albert J. and Myrtle (Risner) Stubblefield and passed away September 2, 2019 at National Health Care in West Plains, Missouri.

She was united in marriage on September 21, 1946 at Thayer, Missouri to Oren E. Sanders, who preceded her in death March 24, 2016, after sixty-nine years of marriage. Two children were born to this union, Edward Sanders and Donna Sanders.

Jessilee grew up in the Myrtle, Missouri community and graduated from Couch High School in 1943. She and Oren lived in Thayer, Missouri, Alton, Missouri, and West Plains, Missouri. She worked as the secretary of Richards R-V School for twenty-four years, retiring in 1989. She was very active in the Veterans of Foreign Wars Post 1825 Ladies Auxiliary. She was a member of the West Plains First Baptist Church. She considered her best job was being a good grandmother and great grandmother.

Memorial contributions may be made to Pleasant Valley Manor or NHC Healthcare in West Plains and can be left at Carter Funeral Home, Inc., West Plains.

Burial will be in Oak Lawn Cemetery, West Plains, Missouri, under the direction of Carter Funeral Home, Inc., West Plains.