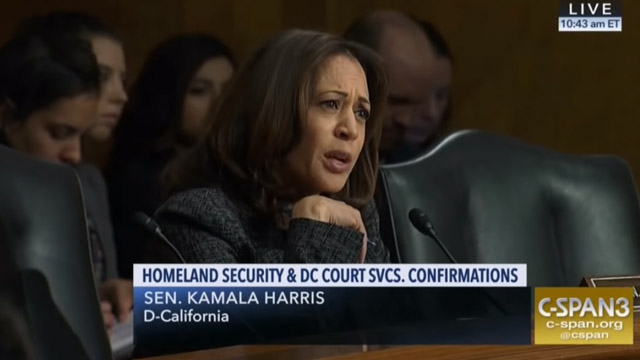 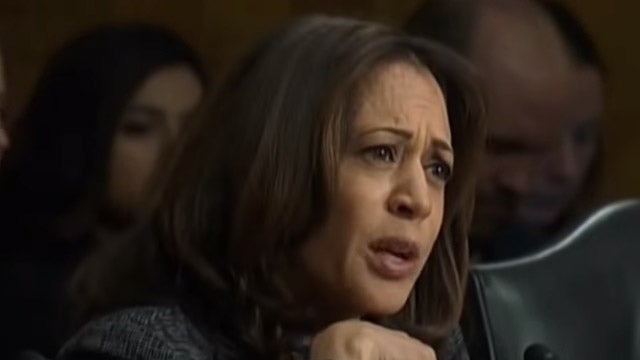 Kamala Harris, who’s considered to be one of the front-runners for the Democrat presidential nomination in 2020, is in the Senate Judiciary Committee, she was out there, one of the groups of people that was savaging Brett Kavanaugh, and she was — let’s see — Homeland Security Committee, she’s on that committee, too, held a confirmation hearing for the Immigration and Customs Enforcement — ICE, nominee Ron Vitello. And during the Q&A, here is Kamala Harris asking Vitello about the Ku Klux Klan. Now, this is the ICE nominee. Here goes. 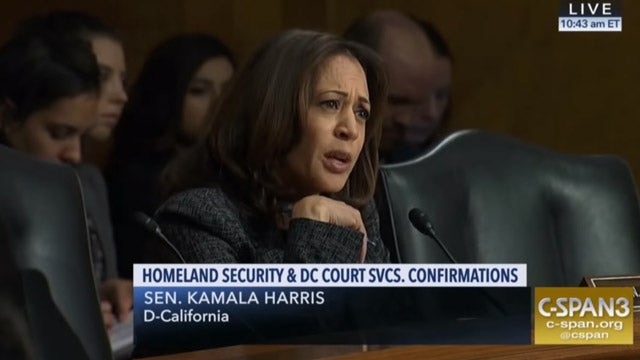 HARRIS: Why would we call them a domestic terrorist group?

VITELLO: Because they tried and use fear and force to change a political environment.

HARRIS: And what was the motivation for the use of fear and force?

VITELLO: It’s based on race and ethnicity.

HARRIS: Right. Are you aware of the perception of many about how the power and discretion at ICE is being used to enforce the laws, and do you see any parallels?

VITELLO: I do not see any parallels between —

VITELLO: I do not see a parallel between what is constitutionally mandated as it relates to enforcing the law —

HARRIS: Are you aware that there’s a perception —

VITELLO: I see no perception —

HARRIS: Are you aware that there’s a perception?

VITELLO: — that puts ICE in the same category as the KKK. Is that what you’re asking me?

RUSH: Yeah. It is. Are you aware of the perception? Perception to who? Her lunatic base. Are you aware there’s a perception out there that ICE is in the same category as the KKK, the Ku Klux Klan! Now, this woman believes this. Do not think that she is just articulating for her base and that she is just pontificating trying to get her base revved up. She believes this. They all do.

And it’s not just ICE. These are the same people, Black Lives Matter, the cops are guilty of this or that. There is an all-out assault on the vestiges of law and order on the premise that law and order is only for the benefit of white males, the patriarchy. And women who sign up with ’em, i.e., marry them, women who sell out to the patriarchy, white women and white men, predominantly white Christians, especially if they’re Irish. You know how the Irish and cops are, ha-ha-ha, then you wink, nod.

All of this is the modern equivalent of the KKK. Why? Why, they’re pursuing people of color and they’re calling them illegal simply ’cause they want a better life, they’re sneaking into the United States. So here you have a woman that’s literally advocating for this dilution, this watering down, this assault on the country, and now attacking law enforcement as something akin to the KKK because they seek to enforce the law. So she kept going with this. Are you aware of the perception? Imagine this.

HARRIS: Are you aware of a perception that the way that the discretion —

VITELLO: I see no parallel.

VITELLO: I see none.

VITELLO: I do not see a parallel between the power and the authority that ICE has to do its job and agents and officers who do it professionally and excellently with lots of compassion.

RUSH: Can you imagine living with a woman like this? This is what animates her, informs her every day. We need to be concerned about the impressions, the perceptions of illegal immigrants from Mexico and Central America that they think you people in ICE are the KKK. Do they even know what the KKK was? So we’re supposed to be aware of their perception? Are you aware that illegal immigrants from Mexico and Central America hate you? So what? What does that have to do with enforcing the law?