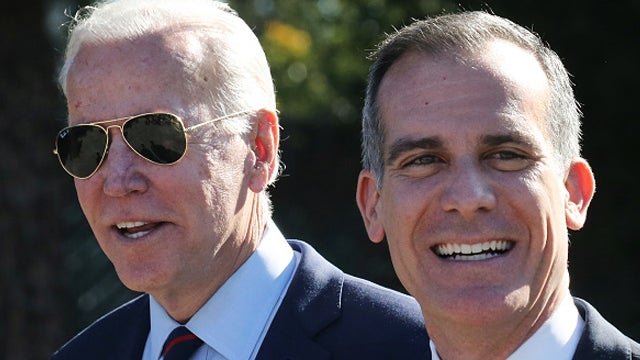 “The mayor of Los Angeles, Eric Garcetti, warns he is on the verge of issuing a new coronavirus stay-at-home order. Los Angeles homeowners who violate the city’s coronavirus-related safety measures may find themselves on the receiving end of some unwelcome consequences. During a press conference last night, mayor Garcetti authorized the city to shut off power and water to properties, including houses and businesses, that are in violation of gathering regulations as a means to shut these places down permanently.”

Who do these people think they are? If you have a large party in your house — in fact, there was one. I’ll tell you what got ’em all out of whack here. There was a big, gigantic party in Beverly Hills, in honor of some NFL player or maybe it wasn’t in honor, but there was a famous — I still don’t know the name, though — NFL player at this party. And there were videos of it, and there were pictures, and people were not wearing masks, and they were not social distancing.

He said that the cops, local law enforcement are having a hard time dealing with gatherings where there are hundreds of people breaking the law. Garcetti says, “We know we can do this,” responding to a question about its legality. The authorization comes as California battles a recent surge in confirmed cases.

They’re going about this the wrong way. There are states they can be studying to figure out how to push through this. But those states are largely run by Republicans, and so that’s not gonna happen. But I want you to imagine. Imagine two parties. Let’s say there are two parties in Los Angeles. The first, a large backyard party of Democrats in Los Angeles where the guests are not wearing masks.

The second party is a large backyard party of Republicans, and the guests are wearing masks. Which party do you think Mayor Garcia would shut off the water and power to? I think we know how this would work. Imagine if a party is held by an A-list Hollywood elitist. Do you think Mayor Garcetti’s gonna go in there and shut off the water and power to Tom Cruise’s place or to Tom Hanks’ place? Pick your Hollywood A-lister.

Now, what you need to do, you need to start combining things, folks, to understand what it’s gonna be like if the Democrats ever win things. You got checkpoints in New York City. Los Angeles is considering Draconian measures to prevent people from having people over. What if the attendants are all coronavirus survivors? Would that party be shut down? What does it matter whether people are having a party? “Well, we’ve gotta stop the spread of the virus, Rush. You can’t just let people get together and do what they want to do, violate our commandments here.” Fine. If you think this is what’s gonna result in fewer cases, go ahead and vote for it.