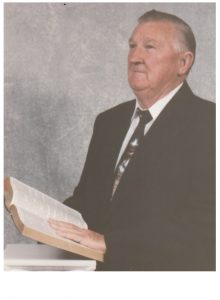 Lonnie Lee Pyatt, son of the late Daniel Roe Pyatt and Rosetta Smith Pyatt, was born November 16, 1934 in Irondale, Missouri and went to be with his Lord and Savior, November 29, 2018 in West Plains, Missouri at the age of 84 years.

He was preceded in death by his wife; his parents, and ten siblings.

He was a member of the Pomona Assembly of God Church, Pomona, Missouri. Lonnie and his wife had been in the ministry for fifty years. He loved to preach God’s word.

Funeral services for Lonnie Pyatt will be held on Monday, December 3, 2018 at 11:00 a.m. at the Carter Funeral Home Chapel, West Plains.