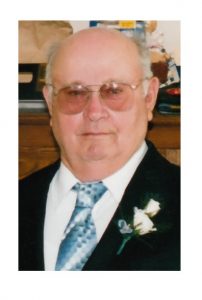 Loren Edward Tharp was born on July 19, 1937 in Gays, Illinois to Loren Sevester Tharp and Loar Dailene (Glaspell) Tharp. He was second of sixteen children. He left this life on October 14, 2019 at the age of eighty-two.

He is preceded in death by his parents; two brothers, Larry (Dick) Tharp and Terry Lee Tharp, and one sister, Lela Kay Tharp.

He married Betty Claudene Montgomery on December 21, 1957. They were married sixty-one years and nine months.

Ed joined the Army National Guard in 1954 at the age of seventeen and was honorably discharged on April 11, 1983 and continued in the Army Reserve until July 19, 2002. Ed was very proud to serve his country and was the Motor Pool Sergeant for many years.

He gave his heart to the Lord at a young age and was active in the church as a Sunday school teacher, deacon, and secretary treasurer. In later years he served in the nursery and was Grandpa Ed to many.

He loved antique tractors and was a member of the Ozark Older Iron Club. He could be found most days in his garage, working on his tractors.

Memorial contributions may be made to the Gideon’s or the Gary Sinise Foundation for Veterans and can be left at Carter Funeral Home.

The family deeply appreciates all of your thoughts and prayers.

Burial will be in Elk Creek Cemetery, Howell County, Missouri, under the direction of Carter Funeral Home, Inc., West Plains.