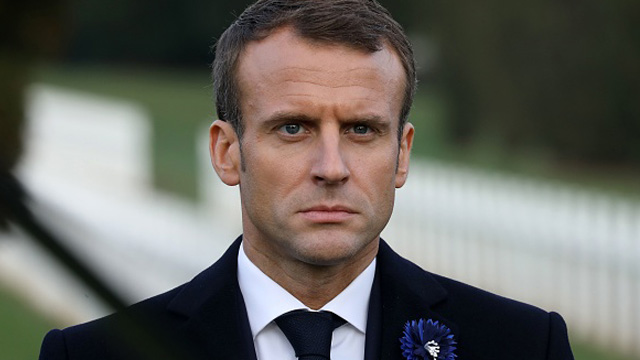 RUSH: There’s a controversy simmering, and it’s a baseless, pointless one, and it’s a purposeful one over President Trump’s visit to Paris. This little Millennial president over there, this Macron guy, decided to take out after Trump and call nationalism treason. 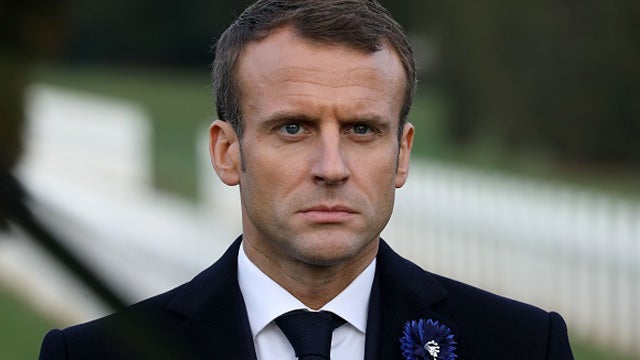 I don’t know, frankly, how many Americans would! ‘Cause, frankly, I don’t know what people have been taught about Hitler and World War II beyond the Holocaust, but I’ll guaran-damn-tee you that one thing it’s not taught is that Hitler was a leftist! And he was! Nazi Germany was the National Socialist Party. The Nazi Party is the National Socialist Party.

It’s a bunch of left wingers. It’s a bunch of big government, no-individual-liberty left wingers. How Hitler has ended up being a right winger is beyond me. Hitler was as devout a socialist and a dictator and tyrant as you could get, and German nationalism was a superiority. It was, “We’re better than everybody else, and we’re gonna wipe out anybody who isn’t us, and we’re gonna either conquer and convert or wipe out, exterminate you.”

That’s what nationalism was, in terms of Hitler. Does anybody really think that’s what Donald Trump means when he talks about has a nationalist? I’ll tell you exactly what he means. It’s exactly what you know that he means! It means he loves America and the days of America being the whipping boy of the world are over! The days of America’s back pocket being picked by anybody they want any time are over!

“Make America Great Again” does not mean it’s a zero-sum game. Just because America becomes great doesn’t mean that France ends up not being great. Trump openly says that every leader ought to have that attitude about his own country. Every leader ought to want his own country to be great. And that if everybody in world politics was trying to make their country the greatest it could be, then everything would be a lot better off today than it is now.

That’s all he means by it. He’s not talking about conquering, eliminating. He’s not suggesting that people who aren’t like us are second or third class citizens. He’s just saying the days of people running this country, apologizing for it, are over. The days of the United States having to bite the bullet because we’re so big we have to take a few on the chin are over. We’re not gonna be made fools of in trade deals.

And here’s Chuck Hagel, a McCain-like Republican from Nebraska. He was a senator. He was on CNN this afternoon with Brianna Keilar. What was he…? Former secretary of defense Chuck Hagel. It doesn’t say what he’s doing now. Anyway, question: “French president Emmanuel …” I know it’s Macron. I just… I’m on the verge of saying “macaroni,” but I just trying to keep it respectable. “French president Emmanuel had a very pointed message when he spoke. A takedown of nationalism, nationalism has taken hold in Europe and President Trump espouses it with his America first view. What is your reaction to saying all of that right in front of the president?”

HAGEL: Macron was correct. It’s very dangerous when you see a world that is starting to unravel in many ways political focusing on nationalism: Our way, to hell with the rest of the world! We can’t live in that kind of a world. This is a world of seven billion people. We are interconnected. It’s a global community, underpinned by a global economy. When they talk like this and they move the forces toward this nationalism, it’s unraveling a world order that America built with our allies after World War II. I think it’s very dangerous, this nationalism. 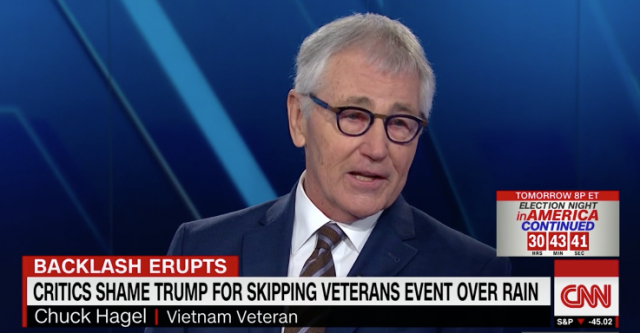 RUSH: This that he just said here, something McCain talked about a lot, and I’m telling you that it is almost gospel inside the American elites, the American ruling class or whatever, “unraveling a world order that America built with our allies after World War II.” McCain spoke of that constantly in his criticism of Trump. Why would we want to take down this order that we built?

But I’m sorry. The rest of the world doesn’t think that anymore.

But beyond that, neither did Barack Obama. Barack Obama and the modern-day Democrat Party does not think the United States is the force for good in the world. We are the problem! We’re the home of racism and bigotry and all this unfair treatment of people that are different and don’t look like us! Why do you think Obama ran around the world apologizing? Clinton had his own version of doing that as well. Trump doesn’t.

Trump is not gonna sit there and accept the idea that the United States is the problem in the world. Trump believes it’s the solution, that we are the solution, that our way of life, that our economic purpose and means can be a force for good in the world for most everybody. It can be the solution to problems. These small-minded nitwits here, they’re more concerned with this global order because of their position in it rather than what it accomplishes.

What is this great world order getting done? What exactly are they accomplishing? Well, you might say, “Well, Rush,” and this is true, “poverty is being defeated all over the world.” Yeah, it is. But why is that? Is it because these guys in the European Union? Is it because of the United Nations, the seat of this great world order that we built with our allies after World War II? No way!

The reason poverty is on the decline is because of greater distribution of capitalism, and a greater success against world tyrants with still a lot of room to go in that regard. But this world order business? It’s almost… It’s a club, and you have just like the Washington establishment and the elites therefore, the world or. And not to be confused with the New World Order of reason. But there was a world order, that the United States, the Soviet Union, and Great Britain all got together after World War II, and they put the world back together.

That’s what this New World Order, this world order is. The United Nations is a prominent role in it. European Union, NATO, all this stuff. And these guys think that Trump wants to throw all that aside and get rid of it basically and have only one place on earth that’s worth living, and that’s the United States. They know for a fact that this is not what Trump means. They continue to misstate it, misrepresent it.

These guys pose the threat, and the reason they pose the threat is because they no longer believe the United States is the force for good in the world. They have bought into the idea that the United States has no moral authority anymore because of all of our shortcomings. How can a nation that was born with slavery have moral authority over anyone else?

And the Obama administration literally said that over and over again.

RUSH: Let me add some things to this whole nationalist allegation that’s being made against Donald Trump. The truth is, folks, that these people — and I’m talking about the Macrons and the clowns and Trudeau up in Canada. Wherever you find these European Union and pro-European people in the so-called world order… Chuck Hagel. Throw him in there. McCain could have been in this group too.

They’re going after Trump because they believe in post-nationalism, meaning it’s a new world here, and the Old World of borders and nation states? That’s antiquated. That should be on the way out. These people… I mean, if you get into the intellectual nomenclature for these kind of people, they’d be called post-national sovereignty supporters. Transnational progressives who want global governments. They want no borders. 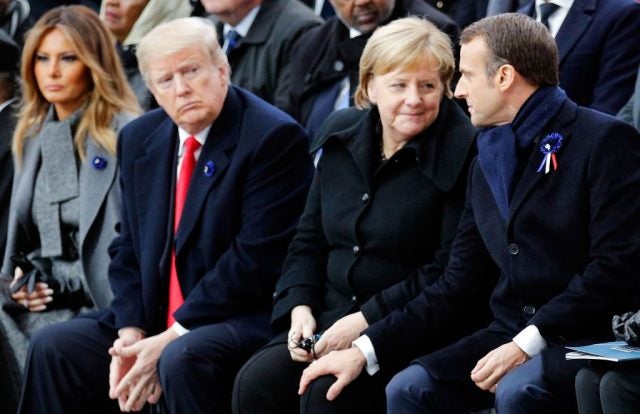 They’re unable to compete with America. They’re unable to defeat America. They haven’t been able to wipe America out. So they just want to subsume it. They want America to basically cave. They want America to cave and give up what we have built and what we have become and fold ourselves into this grand world order, post-national sovereignty. Hagel says the world’s falling apart? Well, if it is, it’s falling apart precisely because of this notion that we can have global governance and one set of laws.

We can’t, because we all have separate interests. We all have separate cultures! We cannot all be considered the same. We cannot all be considered common. There cannot be a world tribunal that serves citizens of the world. It simply isn’t possible! Yet that’s what these people want, and Trump is standing up and saying, “There is no way,” and he becomes Hitler-like? It’s role reversal. You might be saying… (interruption) Yeah, it was John Lennon: Imagine there were no nations. Imagine there were no countries, no borders, whatever.

Why do we have nations? Why have human beings organized themselves into nations, into states, into various other kinds of groups? We need nations for the same reason we need states. And then we need community governments in the U.S. The more remote and unaccountable our rulers are, the more chaos we’re gonna have, and that’s exactly what would result…

Can you imagine if there ever actually were to become a singular world government? You’d have no power against it whatsoever. You’d have no way of addressing it or redressing it. You would have no access to it whatsoever — by design. If you want global order, you need the United States leading the nations of the world. That’s the global order. And that’s what it was when these clowns put it together, but it’s evaporating like California has.