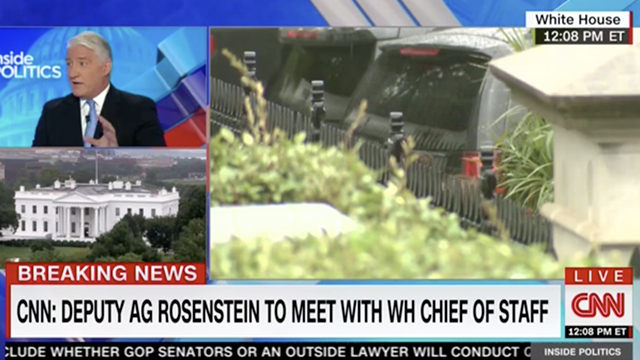 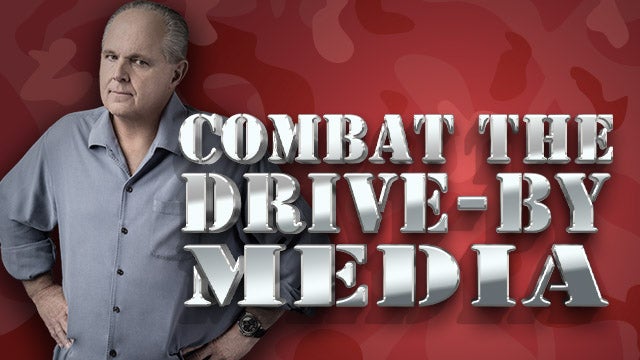 RUSH: Okay, so the media just made something up again. I mean, they just took a germ of a story and blew it up into something that was not true. There was a regularly scheduled meeting at the White House today between Rosenstein and the chief of staff, and I don’t know who else was in the meeting. But I guess the Drive-Bys didn’t know that or, if they did know that, they chose not to incorporate that knowledge into their story. Because they immediately this morning — upon learning that Rosenstein was going to the White House — began speculating that it was to resign. 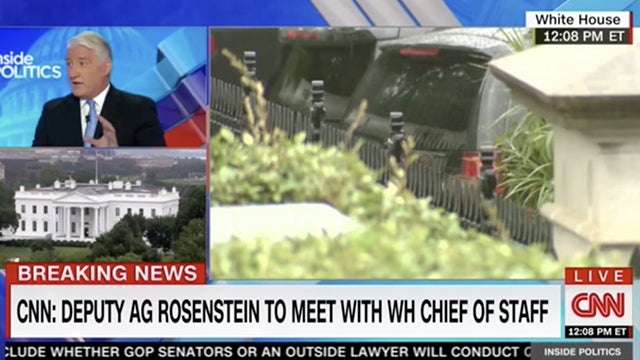 They just reported that Rosenstein had left the White House or was still there or what have you. This takes me to audio sound bites 4 and 5. Last night on C-SPAN, Brian Lamb interviewed the chief White House correspondent Major Garrett. It’s called C-SPAN’s Q&A. Major Garrett — who used to be at Fox and prior to that used to be at the Associated Press — has a new book. It’s entitled Mr. Trump’s Wild Ride. To set things up, Brian Lamb introduced and played a clip of — dadelut dadelut dadelut dadelut — me.

LAMB: One of the places that you can find enormous criticism of the mainstream media is on talk radio. This is what they say almost every day about what you do at CBS.

RUSH: That was me from May the 18th of 2018, this year. That’s a pretty good line, don’t you think? “Those loosely coagulated in the brain.” So Brian Lamb plays that clip as evidence that talk radio is really, really hard on the Drive-By Media — very, very critical — and here’s what Major Garrett said in his answer… 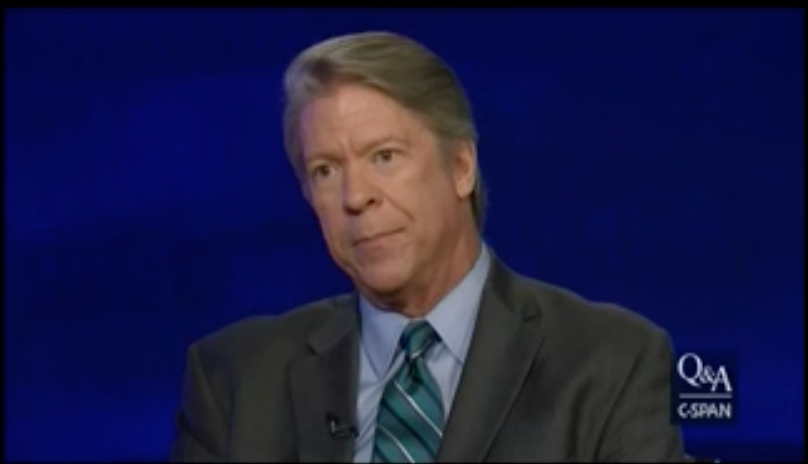 GARRETT: Credibility as defined by Democrats, Republicans, and independents for the last decade, before 2016, was on a steady descent. And what was happening simultaneously? Market share was also decreasing. I ask out loud repeatedly, “Is that a coincidence or a cause?” Our industry, I think, has got to come to terms with that. I understand some of that’s a trope. Some of that is said for marketing purposes for our critics. But if it had no basis, it wouldn’t work — and it does work, and we have to ask ourselves: Why?

RUSH: So Major Garrett is admitting that my criticism of the media (nor anybody else’s) wouldn’t work if it wasn’t true. So he is suggesting that talk radio’s criticism of the Drive-By Media has basis in fact. You know, these people… This is just one little observation here. I’m seeing this more and more often that I do or others do what we do for “marketing purposes.” Now, that’s a new way of saying what they’ve always said, which is: We say outrageous things that we know our audiences want to hear, and so we are simply satisfying demands of our audience.

No, no, no, no. That’s the Democrat Party, Major. And, by the way, I applaud your answer. Don’t misunderstand. But it’s the Democrat Party that “for marketing purposes,” and maybe the Republicans, too. But there’s no marketing here. I have never judged what I think you want to hear and then said it. It would be impossible! There are too many of you who have too many different opinions about things. It would be impossible. The person that tries to be everything to everybody is Rod Rosenstein, and look what that gets you.

There are other examples of it too. But you can’t please everybody, and yet there are countless phonies in this world whose entire reputations is made up of just that: Trying to please everybody. There’s no marketing here. You know, “marketing” is a strategy. Marketing… I’ve been in marketing. I worked at marketing for the Kansas City Royals, and marketing has a distinct pattern to it. It has a plan, and it has an objective, and it is strategy. And it oftentimes is designed… Well, it’s always designed to separate people from their money.

Not that that’s a bad thing, like selling baseball tickets or football tickets or selling anything. There are marketing strategies. Apple has marketing strategies behind the products that they sell. There’s no marketing here. I just show up every day and tell you what I think. I don’t strategize it. You know, I never bring Mr. Snerdley in here and ask, “Mr. Snerdley, if I say this, what do you think the audience reaction is gonna be?” I never once.

I don’t do it. Never have done it. That’s actually… Well, I think that’s true. I think they do know better than anybody that I don’t do that, and that is why this program has such credibility with its audience.