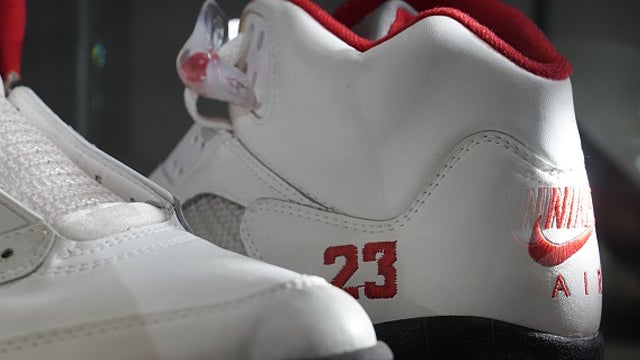 CALLER: Thanks, Rush. It’s an honor to talk to you. I’ve been watching you since I was about 7 or 8 years old on your TV show. My thought was I’ve been watching The Last Dance, the ESPN show on Michael Jordan and the Bulls. And I watch how they kind of let the media destroy him, talking about how he became a bully and how he had a gambling addiction, trying to link his gambling addiction to his dad’s death.

And watching it just kind of making a comparison of how they’ve done all that same type of stuff to Donald Trump without any facts or anything to back up what they’re saying. And then I was watching a little bit deeper into the show, and they were upset at Michael Jordan for not endorsing a Senate candidate. And I was just wondering if you think that was a connection and that’s why they tried to destroy Michael Jordan the way they did?

RUSH: Well, it’s a really curious thing to me. I haven’t seen a single episode of this. And, frankly, I had forgotten that it was even on. So I’m at a little bit of a disadvantage here, Matthew, ’cause I haven’t seen it. So I’m just not gonna be able… In fact, I’m sitting here I had no idea it was this critical of Michael Jordan. I thought it was gonna be just exact opposite. So you’re saying that they really come down hard on the guy?

CALLER: Well, in the show they’re not coming down hard on him, but they go through the media coverage and the —

RUSH: Aw, jeez, I gotta go. I just saw the clock. I was off by one minute. I’m sorry. I’ll address this when I get back, but I gotta go.

Now, that’s not to say there hasn’t been some and Michael Jordan may hear me say this and laugh. “Whoa. What have you been missing?” Because he may think there’s been tons of it. But I don’t remember any of it. I remember when he retired from the NBA they were desperate, they were sad. When he ended up going to play minor league baseball, they loved it, they thought Jordan was great, thought, oh, this is wonderful. 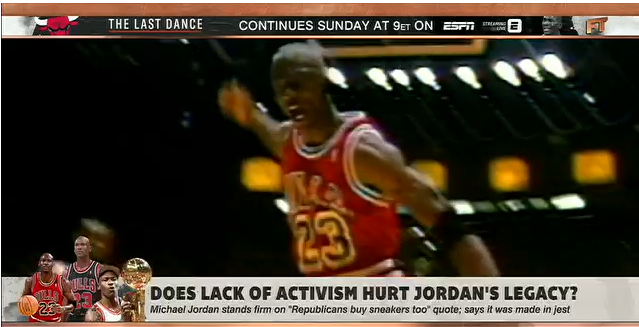 When he unretired from the NBA, came back and rejoined the Chicago Bulls, they were all atwitter, they were all excited, they couldn’t get enough of Michael Jordan. There was one aspect, however, of Jordan that they might have been mad at. Michael Jordan did not endorse political candidates, and he did not get up front and center involved in politics. And he had a very simple explanation. He said, “Republicans buy sneakers too.”

Meaning, why do I want to sit here and alienate half of the customer base? Now, if the press was irritated at that, I can understand it. I can believe it. I just don’t remember it. So when the caller said that ESPN’s got this special running — I don’t even remember the name of it, the name of the special. I forget what the name of it is. I haven’t seen it. When the caller said that ESPN is highlighting negative media, I don’t remember seeing any. So I was kind of paralyzed there because how can you comment on something you don’t think has happened.

I mean saying that Michael Jordan gets negative media is like saying that Charles Barkley does or that Barack Obama gets negative media. Just doesn’t happen. I’m sure they think it does. But somebody like me — I would kill for the press that Jordan gets, or got, or Charles Barkley. But it ain’t gonna happen because I am a conservative, and they are not. So you deal with that and you move on.