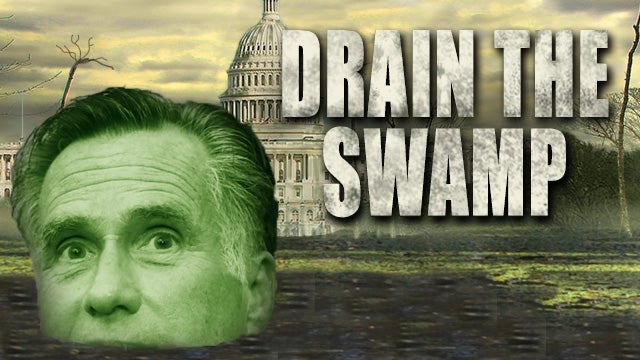 RUSH: Grand Rapids, Michigan. Patty. Great to have you. Hi.

CALLER: I’m so excited to be a first-time caller and a (garbled) longtime listener.

CALLER: I have waited such a long time to say that. This is a defining moment for me. I’m so happy and thrilled to be talking to you.

RUSH: Well, thank you very much. I appreciate that.

CALLER: (crosstalk) Yes. I’ll get to my point, which you were talking earlier about Romney. And I am so disgusted with Romney. I am (unintelligible) again and when Romney ran for president, I was so proud to vote for him. I thought he was the leader we needed. I talked to everybody about him being the right man for the job. And he has done nothing but disappoint me ever since then.

I am so disgusted. I wish the people of Utah would recall him. He has done nothing but fight us, fight Trump all the way. And those are his supporters too. The people that voted for Romney are the same people that voted for Trump. He needs to get a clue. I am so tired of hearing about him — every step of the way — just block everything the president is doing. You can tell how disgusted I am. I just can’t stand it. He makes me so mad.

RUSH: Yeah, I hear how disgusted you are. A lot of people are. Mitt Romney represents the Never-Trump mentality that is in the Republican Party. He’s a strain of it. He may not be as virulent as some of the pseudo, so-called intellectual magazine types who comprise the Never Trumpers — column writers and so forth. But he… It’s exactly as I stated. Look, here’s Mitt Romney. He is running for president in, what, 2012.

And in the early stages of it, there’s a rap going around that he’s not really a conservative, that he’s a RINO, that he’s a moderate Republican and he has to pretend to be a conservative ’cause he really isn’t one, and he (kind of like most people in Washington) looks down his nose at conservatives. So in an attempt to persuade people that they were wrong, that he was in fact a conservative, you remember how he described himself?

He said, “I am a severe conservative,” and all of us conservatives looked around and said, “What the hell is ‘a severe conservative’? We’ve never heard that.” Romney exemplifies the Washington establishment. He is career politics. His family, his father. He’s career. There is a certain way that those people behave. There’s a certain station that they think they’ve achieved, and they maintain it by knowing their place — and the Republicans’ place is always second tier.

Yeah, you can test for the presidency every four years, and you may win now and then. But then you acknowledge you’re gonna be destroyed the next four years. You acknowledge that you’re gonna be hit. That’s the price that you will pay for winning, and you have to smile and grin and bear it. It has grown to just so frustrate Republican voters and conservative voters who have thought all along that the Republicans are actually in this to win and to dominate and to push the other side aside, that we are there to exercise our will over the forces of opposition.

We are there to win.

That’s not the way Republican establishment people look at their role in the establishment. Look, you know this as well as I do. Trump comes along and he just totally upsets the established norms, and it’s on that basis he’s gotta go. And then they claim that he’s incompetent and a boob and doesn’t know what he’s doing, is filled with chaos, endangering the United States, losing our respect around the world. “We can’t have this!

“We’ve established this world order that the United States set up after World War II. Trump’s coming along threatening to blow it up. We can’t let this happen. We can’t allow this to happen.” So it’s easily understandable if you know who the players are and if you have come to drips with the way Republicans in this establishment acknowledge their place in it. Grab sound bite number three. Here is Romney, by the way. After this program ended (I don’t know if that’s a coincidence, could well be but don’t know) he goes to the floor of the Senate and makes some remarks about the ceasefire between Turkey and the Kurds in Syria.

ROMNEY: The announcement today is being portrayed as a victory. It is far from a victory. The decision to abandon the Kurds violates one of our most sacred duties. It strikes at American honor. What should have been done to the Kurds will stand as a bloodstain in the annals of American history. Are we so week awake and so inept diplomatically that Turkey forced the hand of United States of America? Turkey? 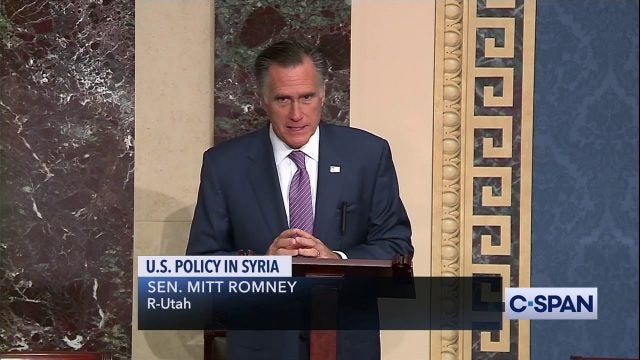 I don’t know how many there were, but there were a number of them who just immediately, immediately followed the media narrative and the Democrat narrative. They started condemning Trump for making a bonehead move pulling troops out of Syria. They didn’t wait. They didn’t wait for any truth. They know full well! This is what so frustrates me. They know full well the media is a constant obstacle and enemy.

They know that they should not trust anything the media says, certainly not the first thing they say about anything because it’s nothing more than a Democrat Party echo chamber — or, in fact, they may lead what the Democrats say. And yet here they were caving! And then the ceasefire was announced. Pence and Pompeo announce a ceasefire, and I’m sahing, “I wonder how many of these Republicans have got egg on their face now?” and I guarantee you it was every damn one of ’em who jumped the gun.

They had to get out in front of it, had to follow the media narrative because they basically didn’t have the guts to stick with it for even six hours or a day. So because Pompeo and Pence announced the ceasefire, “Well, we can’t have that! That can’t be the last word on this.” So now there has to be word, “It’s not a ceasefire! The Turks are continuing to attack the Kurds. Trump got fooled again.” I don’t understand… I do understand it. So many Republicans just cave, rather than just wait.