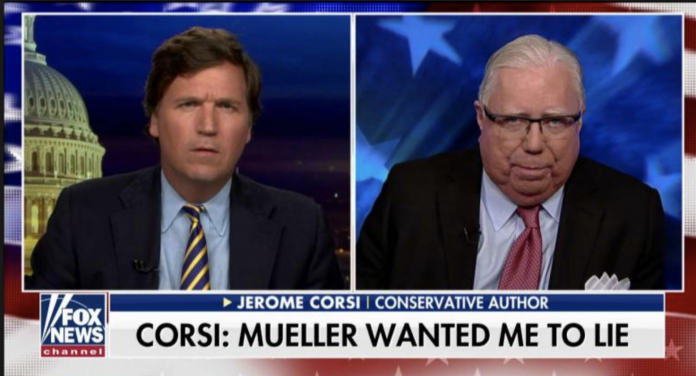 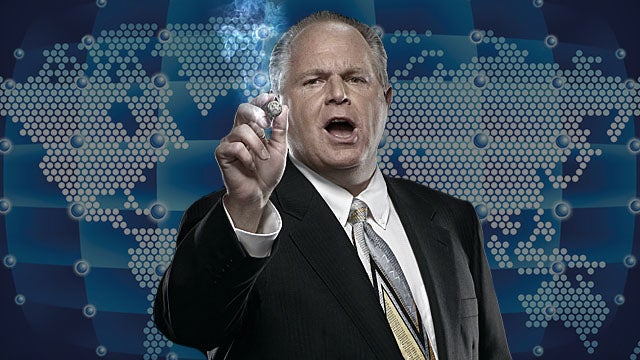 RUSH: Folks, have you noticed something? While all of this coverage… Like, I’m looking at a picture of Michael Flynn. The Drive-Bys are beside themselves with excitement because Mueller is gonna be filing papers soon that will indicate the extent to which Flynn has cooperated. We’ve got Jerome Corsi out there maintaining that he originally testified and then wanted to amend his testimony to make sure it was truthful, and that Mueller wouldn’t let him.

We’ve got Alan Dershowitz saying he’s never heard of this. He’s never heard of this kind of stuff before! Dershowitz… Grab sound bite No. 8. Actually, grab No. 7. Let’s have Corsi first, Jerome Corsi. I can’t believe that this whole investigation now circles around — and again, I have to be very, very careful. I don’t mean this to be insulting.

But this whole thing now circles around Mike Flynn and Jerome Corsi and maybe Roger Stone? Where are the Russians in this organization? Where are the Russians in this collusion? They aren’t there. Anyway, here’s Corsi. He was on with Tucker Carlson last night, and Carlson said, “You’re saying that Mueller’s people were intimidating you to get you to do what? What did they want you to do that you refused to do?” CORSI: The key thing was that they wanted me to be the key link between… It was gonna be Roger Stone to me to Julian Assange and then they’ve had all their collusion together. It would be Roger Stone to Steve Bannon to Donald Trump and coordination with Assange. Except I figured out, on my own, that Assange had Podesta’s emails. I never met Assange, I’ve never talked to Assange or emailed him, and I had no contact with anyone who is in touch with Assange. And the prosecutors refuse to believe this. So it led to grilling after grilling after grilling.

RUSH: Corsi says they want him to say that he is a link to Assange and that, therefore, this linkage from Stone to Bannon to Trump and Corsi in the middle here with Assange being the central figure and the Podesta emails, that’s what Mueller is attempting to get witnesses to cop to. Corsi is saying he’s not gonna cop to it, and Corsi says (paraphrased), “I wanted to go back and amend my previous testimony ’cause I know they’re looking at process crimes.

“I wanted to make sure that I was not telling something untrue and they wouldn’t let me change it.” So they had Professor Dershowitz to comment on this on Fox News last night after Corsi, and Carlson says, “If Jerome Corsi claims that he’s allowed to amend his testimony and then being threatened with prosecution for lying using the first unamended transcript of the testimony, does this pass the smell test with you, Professor?”

DERSHOWITZ: In 55 years of practicing criminal law, I have never heard or read of any case where a person was allowed to amend his testimony, and then corrected it, and was then threatened with indictment for the unamended original alleged lie. That just seems utterly unprecedented, if those facts are correct. 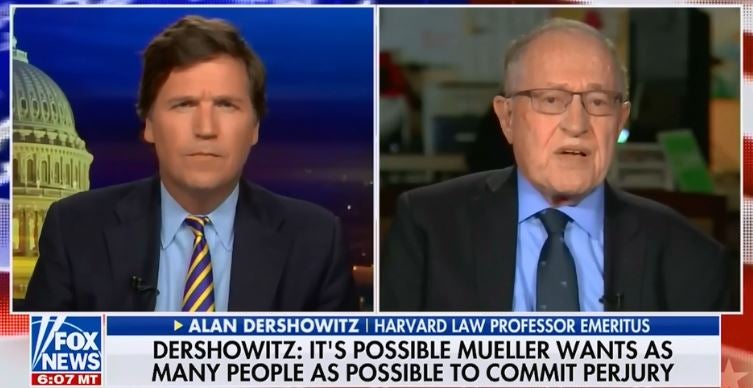 RUSH: So let me unpack this just to make sure that you know what Corsi is saying and what Dershowitz says he’s never heard of. Corsi originally testifies to X, Y, and Z. Then Corsi wants to amend that and says, “I’m sorry. The first stuff I said wasn’t quite true. I’ve had a refreshed memory or whatever,” and he wants to amend X, Y, and Z to A, B, and C. Mueller says, “Well, okay. I’m gonna prosecute you for lying to me on X, Y, and Z!” Corsi’s saying, “No, no, no! I’m correcting that. I’m fixing that.

“I’m coming to you and telling you that I’ve had a memory recollection, and X, Y, and Z is now A, B, and C.” Mueller says, “Screw you! I don’t care if it is. I’m still charging you with lyin’ to me on X, Y, and Z.” Dershowitz says he’s never heard of that happening. He’s never heard of a prosecutor going back and charging somebody with lying to them after the person has made the corrections and the amendments in what was said. It doesn’t surprise me! I think there’s a lot of stuff happening here that hasn’t happened before.

I think there’s a bunch of stuff going on here that, in the world of practicing lawyers, may be unprecedented. ‘Cause I think this thing has one purpose and one purpose only, and that is get rid of Donald Trump, however. If it’s impeachment, if it’s creating public demand that he go, if it’s destroying his reputation, whatever, it’s get rid of Donald Trump. The reason I bring this up is because I was having a chat back and forth last night with some people, Victor Davis Hanson among them. It’s amazing — outside of the daily narrative in Washington — what actually is happening.

Let’s take a look at this. Let’s try put some of this in a proper perspective or context. We talked about Paris earlier. Paris is burning. People in Paris are livid over what they may or may not understand as communism, slash, liberalism. They are livid over the fact that they finally now know what dealing with climate change means. It means $7-a-gallon gasoline and higher. You have to ignore the media in all this. Trump owned the G20. Trump owned it! I don’t care what kind of little nattering nabob news stories there were, he owned the G20.

Europe is in trouble overall. Every one of Trump’s European critics is failing or discredited. Look at Macron and France. His economy is in shambles. He had to acquiesce to protesters and promise not to raise the gasoline tax for six months. Macron’s polling data, his positives are 25 points lower than Trump’s. Theresa May, U.K. Now, remember, Europe is utopia. Europe is our guiding light. Europe is our example to follow. Europe is where there is total sophistication, there is total understanding, there is total correctness. Europe should be our model.

Well, France is burning, Paris is burning, Macron is in shambles, Theresa May’s weakness has screwed up Brexit. Her government’s teetering and tottering here on the thinnest of margins. Because everybody in Great Britain doesn’t want to get out of Brexit so they’re trying to confuse it. They’re trying to deny the express will of the British people by making the exit from Brexit such that Britain will be left standing alone with no allies. They’re purposely trying to sabotage it. And the people of the United Kingdom want no part of it.

And the Europeans are dead wrong on all these things, and yet Europe is utopia, Europe is where we ought to be aiming for, Europe is the way we want to be. And Trump is outflanking every one of these European leaders that has spent time after time criticizing him. And what’s the result of all this? Well, I’ll tell you what the result is, and it has them so ticked off, I can’t categorize it for you. The U.S. economy, defense, the energy sector, American foreign policy is in the strongest position vis-a-vis Europe in modern memory.

And nobody wants to notice because it’s Trump that’s done it. Nobody wants to notice because it’s Europe. Europe should be showing us the way. Europe should be teaching us. Europe and the ChiComs on infrastructure. We should be following the ChiComs on infrastructure and Europe on immigration and transportation. They love Europe ’cause they love trains. Trains are really civilized, you know, trains are really sophisticated. Orient express and all this stuff, maybe a couple murders now and then, but still it’s really cool to travel around on train. Plus it’s saving the planet.

It’s astounding the success all of these seasoned political professionals, all of these entrenched leaders in Europe and including the ChiComs, all supposedly gonna embarrass Donald Trump ’cause Trump, he’s like a bull in a china shop. He doesn’t know what he’s doing, he doesn’t understand policy, he’s not very smart, he doesn’t read, he doesn’t portray any of the characteristics of an intelligent, educated person. And yet he’s running rings around every one of his European critics.

They’re barely hanging on or their big cities are burning or they’re trying to defy the will of the people as in U.K. and Brexit. And in the midst of all this, those European leaders are hoisted on pedestals, and they are praised as great sophisticates, great intellectuals, great examples of the kind of global bipartisan leadership needed. And Trump is castigated as an imbecile who has no business being where he is or doing what he’s doing.

One man, one man against an entire class structure, which is largely what this is about, class, meaning Trump’s from the lower class, middle class, lower class kind of mentality versus these elites and their super, hypereducation. They’re much, much higher on the human scale. They’re better people. Trump is just an embarrassment yet he’s making fools out of all of them in their areas of expertise, policy. It’s kind of like the same thing with the Never Trumpers. The Never Trump conservatives. They supposedly have devoted their lives to much of what Donald Trump is making happen, and they hate him, and they’re opposing him. It doesn’t make any sense.

Maybe they haven’t really meant all of this. They really oppose what they believe happening, being implemented, because Trump is the guy doing it? Maybe they realize that Trump is demonstrating they’re not really that necessary, that maybe you don’t need to be subscribing to all these Never Trumper websites to learn what conservatism is. A guy who never even uses the word is doing more conservatism than any of these people have combined! It’s amazing to look at this dispassionately and away from the daily soap opera narrative of the Drive-By Media.