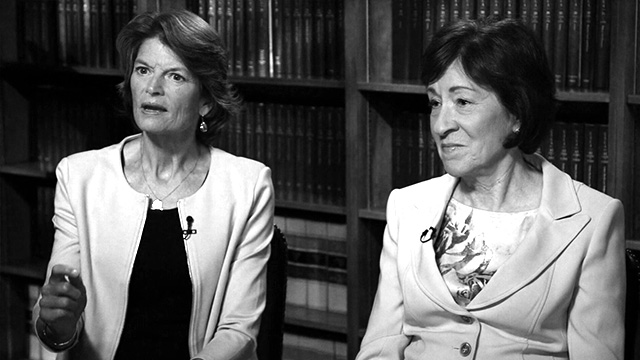 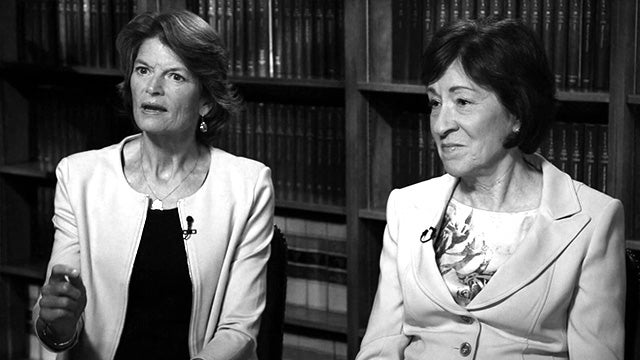 RUSH: Yeah, you can make book on this too. Ruth Ginsburg, Ruth “Buzzi” Ginsburg, is gonna hang on as long as she can. Her objective is to hang on ’til 2020. That’s when the Democrats think that Trump will lose reelection. She will retire in 2020 and then the Democrats will say, “Wait a minute here. The Biden Rule! Trump can’t nominate her replacement.”

I want to make… This is probably foolish, but I have the opportunity here, and I’m gonna give it just a little bit of a shot. Over the years, I have very rarely made personal appeals to elected officials on the belief that it would be unsuccessful, wouldn’t work. It’s probably still the case. However, if I had a chance to talk to Lisa Murkowski and Susan Collins, I would like to say just one thing primarily to them. I just saw a little news report that they’re both wavering.

Murkowski’s under the idea that it really would be great if we could have an FBI investigation. That would answer all the questions. Susan Collins, I don’t know what specific thing or things that make it impossible for her to openly say she would support Kavanaugh right now, despite how they’ve treated her. They have disrespected her, they have blackmailed her, they’ve threatened her. They have run a GoFundMe campaign, the left has, on Susan Collins, claiming that they’re going to fund an opponent of hers to the tune of a million dollars to start until she commits to voting “no” on Kavanaugh.

She stood her ground.

She wouldn’t accept that promise.

So she started to harass her with cardboard cutouts three feet in length of male genitalia. She openly expressed her disgust for some Democrat tactics and so forth. I know the pressure is on both Senator Murkowski and Senator Collins to look at this as male versus female, and they are being pressured to be loyal to their gender here, and they’re being pressured to acquiesce to the Democrat-leftist line of thought, which is that a woman must be believed regardless and despite no evidence.

A woman must be believed because men just naturally can’t be trusted. And if there is even a slithering doubt about this, that Kavanaugh cannot possibly be confirmed. And I would, in probably wasted breath, ask both of them to rise above gender here and look at this in terms of human decency, basic humanity. It cannot have escaped either of you ladies how Judge Kavanaugh and his family have been treated.

It can’t escape you how he passed every exam before your committee with flying colors. You cannot ignore his overwhelming qualifications, his judicial temperament. You cannot overlook that he has the characteristics that even brilliant leftist lawyers in this process acknowledge, that just in terms of jurisprudence, there isn’t anybody more qualified or better to put on the Supreme Court than Brett Kavanaugh, at any time — not just now, but at any time.

I would ask both of you ladies to just step back and take a look at what this process has been and what its objective really is. It’s nothing about Supreme Court, ladies. The left doesn’t think that Kavanaugh poses a threat to the court. Kavanaugh posed a threat to them and their use of the court. They use the court as a political backstop for when they lose elections. But in terms of confirming or not confirming a human being who’s qualified, you’re not gonna find anybody better than Judge Kavanaugh.

And then take a look at what’s being done to him and his family. Do you want to be a party to that? Do you really want to be a party to a…? It’s not just a smear campaign. This is an outright, open, in-front-of-everybody-who-wants-to-see-it-for-what-it-is effort to destroy a fine man and his family, his entire life’s work and future. Does this accuser have that kind of evidence? Does the accuser have that degree of evidence that is worthy of the full destruction of an American life, an American career and an American family that poses a threat to no one?

Does this accuser or do any of the others, do they really have…? Senator Murkowski and Senator Collins, do they really have that kind of evidence? If they do, why are you still struggling with the decision? If you think that what these accusers have is true, then it ought not be even something you have to think about. But the fact that you’re going back and forth on this is quite indicative that you don’t think that whatever the accuser has or is saying is sufficient.

We’re not talking about just keeping somebody off the court here. We’re not talking about just defeating a Donald Trump nominee. Do you want to be party to what the objective here really is? Does Brett Kavanaugh, American citizen — Brett Kavanaugh’s wife and kids…? Do they deserve, have they done anything that would warrant the ruination of their entire lives? It’s not correct to say that if this doesn’t work out, that Kavanaugh will have something to fall back on.

They are try to take that away too.

It appears to me that there isn’t any evidence here, that what we have is a last minute, late-breaking allegation with no substance whatsoever and a reluctant witness, a reluctant victim to come forward and make the case that something that happened 35 years ago that cannot be established and cannot be proved… Even if, Senator Murkowski, the FBI got involved, there is no way any investigatory agency, investigative agency will be able to determine.

But even the worst of her allegations do not warrant what the end result here and what the unabashed effort of the Democrats is. Now, I know I’m probably (chuckles) spitting spitballs here at a battleship. But I couldn’t be a party to this, and I think so much of what happens in Washington… Ari Fleischer was right. It’s a sick town right now. I don’t think it actually crosses the minds of people who find themselves in the middle of this, as in senators, what’s really at stake here. And I’m not talking about politics.

We’re talking about a human being, an American citizen of great stature who is being destroyed. They’re attempting to literally destroy him, and there doesn’t seem to be any concern about that. Nobody seems to have any guilt or conscience about what the end result of this (with no evidence whatsoever) would end up being. Is it that easy in Washington to destroy people? Is it really this easy? This all it takes?

Yeah, I just saw Bill Cosby sentenced three-to-10 years in state prison as a sexually violent predator, $25,000 fine, and he has to pay the cost of prosecuting it. There’s a lot of evidence there, Senators Murkowski and Collins. There was a lot of evidence there. There isn’t a whole lot of doubt about the Bill Cosby cases. But this? Is it this easy to destroy people? I mean, we outside of Washington see this happening so frequently that we wonder.

We hear about humanity and tolerance and compassion. We don’t see any of it in Washington. We’re talking about the… It seems like it’s a one-way street, the destruction of lives here, careers. The destruction of the ability to earn a living. As a human being, you cannot live a life much more devoted than Brett Kavanaugh has, and to see it seemingly so relatively easy to destroy in today’s Washington is really scary. A little bit sobering.

You claim to want to see evidence, but there isn’t any, and there isn’t going to be any. The politics of it? You’re afraid to reject the allegation of a woman because you’re betraying your gender. I would ask every senator in Washington to rise above this. We’re not talking about gender and loyalty to genders here. That’s identity politics. We’re talking about humanity, a human being here that didn’t do anything to anybody, by the way, before this all started.

There wasn’t one allegation that Brett Kavanaugh had done anything to anybody, harmed anybody. So it just seems to me that… I know you’ve got a tough call to make in your world. You’re women. The pressures here are to be loyal to gender. Of course, there are stories of male abuse and harassment that are true, undeniably so. But just because there’s evidence that it has happened and does happen doesn’t make it so in this case.

It just seems so obvious that the Democrats are attempting to continue to thwart the will of the American people every day. This nomination is the result of the American people electing Donald Trump. And despite the efforts of some in that town to say that his election was illegitimate because he colluded with Russia… Look at all of the things for which there is no evidence that Washington, D.C., is operating under.

The will of the American people is on display and at stake here, and it just seems that it needs to be treated a little bit more seriously than the politics as usual or the politics of the day regarding the #MeToo movement. None of that seems relevant here. I keep hoping every day that I’m gonna wake up and see that Collins and Murkowski have made up their minds that after looking at this and listening to everything, that there just isn’t enough here to do what would be the result here, and that’s destroy life and career of somebody. 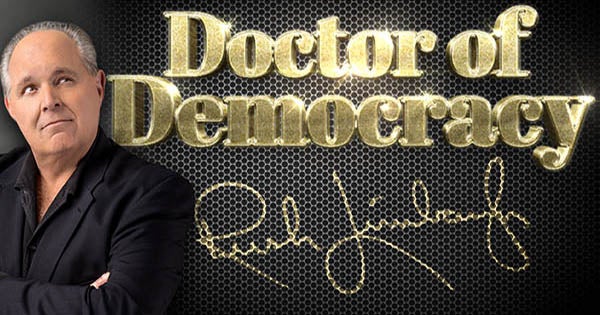 Please don’t participate in that. I realize you have a tough decision in your minds, and I know the immense pressure you both are under. But having a sense of decency toward humanity and being unwilling to participate in what is so obviously an effort to destroy — not just prevent a confirmation, but to destroy — a human being with innuendo and no evidence. It can’t be easy to be part of that. I hope it isn’t.

RUSH: San Antonio. This is Patty. Is that right? Yeah, hi, Patty. Welcome.

CALLER: Hi. How are you? It’s great to talk to you.

CALLER: Great. My thought is that when the day is done, this might actually end up being a good thing in the long run. I mean, it’s horrible now. But we’ve seen that phenomenon where so many Supreme Court justices have been conservative prior to their appointment to the court and then once they get into Washington and get into that Washington bubble, they start going to the middle or even to the left. My thought is that if Kavanaugh does get confirmed, he will know, without a doubt, who they are. I don’t think he’ll ever trust them again, and I think in a way that would almost ensure that he continues to, you know —

RUSH: So you don’t think that they’ll be able to buy him off on a case-by-case basis with puff pieces in the Washington Post Style section?

CALLER: I think he would be like Justice Thomas, who has been just stellar, who has just been, you know, completely right on.

RUSH: Boy, are you right about that. Clarence Thomas? What a godsend for the court and for America Clarence Thomas is be. Not just has been, but is. His legal mind and his the immigrant is on display with every opinion he writes or concurs or defense from. He’s a genuine treasure, and you’re right about Kavanaugh. I don’t think it was ever a problem with him anyway, though, to tell you the truth.