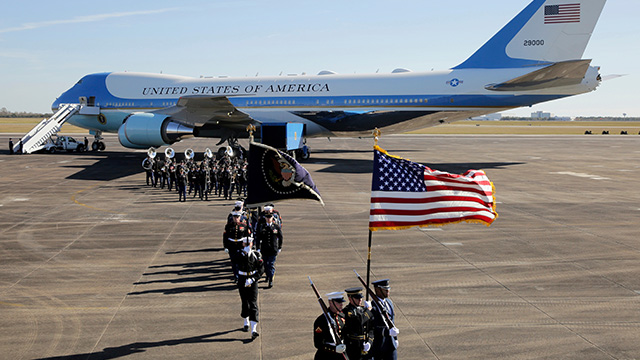 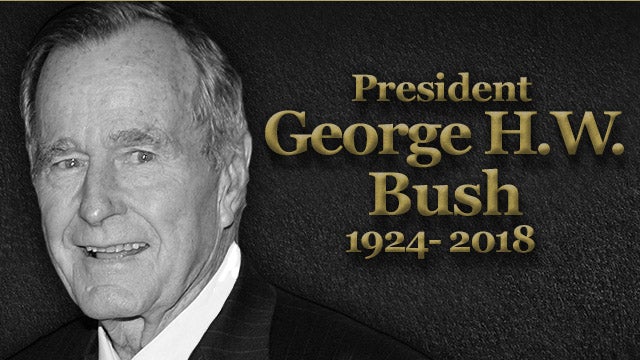 RUSH: They’re just starting the engines on the Boeing 747 that will take George H. W. Bush back to Washington. The Bush family’s aboard. I’m pretty sure — you know, the Boeing 747, they call it Special Air Mission 41. I’m pretty sure this is the airplane that went into service as Air Force One during George Bush’s presidency.

Greetings, my friends, and welcome. Great to have you. Rush Limbaugh here at the EIB Network, and another full week of broadcast excellence. Telephone number, when we get to the calls as time unrolls, it’s 800-282-2882.

I don’t know how many of you have been to the Reagan library, but if you have, you have seen Air Force One there on display. And a lot of people wanted Air Force One when it was decommissioned. It was decommissioned in 1992, and the two Air Force Ones now — there are always two of them — went into service in 1992 during George H. W. Bush’s presidency. And I’m pretty sure that it’s the same airplane. I think they’ve made sure it’s the same airplane that went into service for him that’s now taking him back to Washington from Houston.

But when the Boeing 707 that served as Air Force One for decades prior to 1992, when it’s decommissioned, taken out of service, a lot of people wanted it. The Smithsonian wanted it. Boeing wanted it back to put on display. A number of museums made a claim. George H. W. Bush decided to let the Reagan library have it on the basis that more people would see it there than anywhere else.

This weekend has been complete with people sharing their memories and remembrances of George H. W. Bush, and I have my own. And I’ve shared some of those stories over the course of the years of this program, but, folks, I’m gonna go through some of them again because there are new people tuning into this program each and every day.

It’s a rare opportunity for an average, ordinary citizen like me to have been able to access certain institutions and people. And the Bush family have opened many doors for me. George H. W. Bush, Barbara Bush, Robert Mosbacher, commerce secretary for President Bush became a good friend. George W. Bush. All of them have been as open and accommodating and nice as they could be.

In fact, George W. Bush visited my mother’s home in 1999, 2000 during the campaign one year when I happened to be there just to say hello. He was on a campaign swing through southeastern Missouri. And to get to know the family and have them invite you in, however limited it was for me, my primary access to them was in their official lives, but it’s still a rare and great honor, and I would be remiss if I didn’t acknowledge it today and also comment on the way media handles these things. 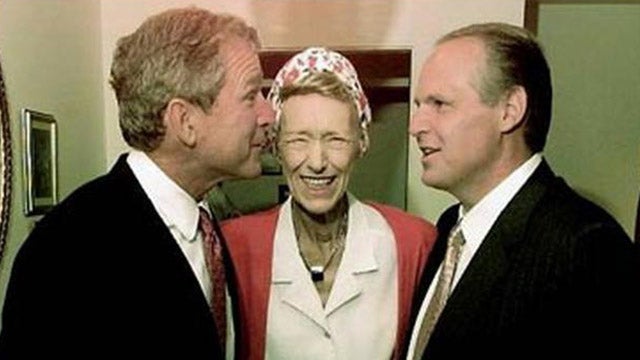 It’s just amazing, folks. Just amazing. We’re hearing about how the White House was all filled with dignity and grace and how it’s a long-lost time compared to what we have now with an ogre and some gross figure in the White House. Have you ever noticed, though, that when the media wants to go back and recall a White House and a period of time in Washington when there was dignity and respect and bipartisanship, they never go back to Clinton? You ever notice this?

Funny how none of them ever mention the name of Bill Clinton. And I would put it to you that Bill Clinton did more to destroy the dignity of the presidency in the White House than Donald Trump ever could. In addition, the media is celebrating George H. W. Bush in a way they never did when he was alive. This hypocrisy, I can’t help but notice it and I can’t help but comment on it.

It’s much like when President Reagan died and it came time for the media to cover it. The media was literally flabbergasted at the millions of Americans that wanted to pay their respects to Ronald Reagan both in Washington and in California. The streets were lined in both places with just hundreds of thousands of people. The media was totally stymied by it because in their world they had discredited Reagan.

And when President Bush was in office for his one term, they didn’t accord him any of the respect that you’re getting now except on one occasion, and that’s when he rejected his “no new taxes” promise and made a budget deal with the Democrats.

I’ve even got sound bites here today with media members praising Bush. That’s the last great Republican who finally succumbed and made a deal with the Democrats for the betterment of America. It’s just frustrating as it could be. During the first Gulf War, which we title Gulf War I here. This is the one that took two days. This is the one that drove Saddam out of Kuwait.

I’ll never forget, Bush was lambasted for doing this, and the left had a battle cry: “No blood for oil!” They said that Bush had no business doing this, that pursuing warfare for the sake of securing oil was beneath what the United States should be about. It was not worth American blood and treasure to secure the free flow of oil at market prices. There wasn’t any love lost.

During that particular Gulf War, remember CNN had some personnel stationed at a hotel in Baghdad. The United States military had to rescue them. Bernard Shaw was one of them. When the CNN crew got back they refused to be debriefed by the FBI, CIA, and American intelligence agents on the basis that they, as journalists, cannot choose sides. They couldn’t even choose America over Saddam Hussein. “Oh, we must remain objective,” said Bernard Shaw. Refused to provide any intel. It was the al-Rashid Hotel they had to be rescued from. It was part of the original attack mission.

I marvel at the way all of this goes down, because it’s all about Trump, when you get right down to it. It’s all about making the current occupant of the White House look as bad as possible. And if you have to build up a former Republican in order to do that, fine. But I’m just telling you that during the 1992 campaign, when the economy was not bad at all, the Clinton campaign had this thing, “The worst economy in the last 50 years.”

Does the number 92 ring a bell, 92% negative news coverage for Donald Trump? Do you know what 92 negative percent media coverage in 1992 on the economy in the presidential campaign of 1992. Ninety-two percent negative coverage on the economy. That was the New York Times story, George Bush supposedly not knowing what a supermarket scanner was, a story completely manufactured and made up.

They did their best to portray George Bush as — well, here. AP put out a tweet that they had to recall over the weekend. “George H.W. Bush, a patrician New Englander whose presidency soared with the coalition victory over Iraq in Kuwait, but then plummeted in the throes of a weak economy that led voters to turn him out of office after a single term, has died. He was 94.”

So we have wheels up on Air Force One, Special Air Mission 41 — it’s not Air Force One when the president’s not aboard — on the way back to Washington, D.C. The last time I saw President Bush and his wife, Barbara, was in Houston. And I forget the year. It was not that long ago, four or five years ago. The president had been very ill and had been hospitalized. And we got hold of Jim McGrath, who is the family spokesman and basically a de facto family member, and asked if we could come down and say hello, not thinking that the request would be granted. But we wanted to make the request anyway.

So they put it together. They put together a lunch in Houston, Kathryn and I went down there and had just a great two and a half hours. President Bush was in a wheelchair. Mrs. Bush was — they were just always nice people. They were friendly and Mrs. Bush had a terrific sense of humor. I’d never heard of the place we were having lunch. It was an exclusive, private club. She said, “Oh, yeah, yeah. You have to be born here to be a member.” They even have a delivery room down in the basement,” making a joke of the exclusive, elite nature of the club. 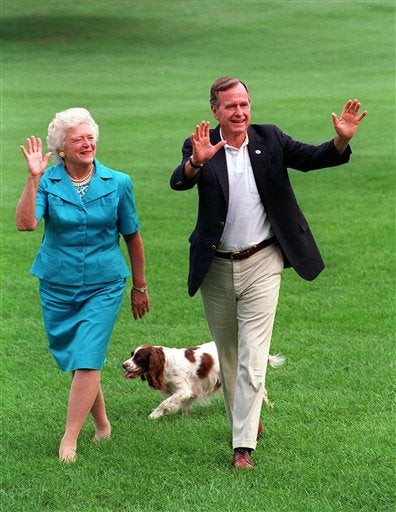 One time, two or three times in Kennebunkport related to the First Tee golf charity which is a PGA way of extending the values of American life via golf to young people who would otherwise never get to play the game, and President Bush was the honorary chairman. They have just been exceedingly accommodating and nice. Just decent people.

And it is par for the course and a little frustrating at the same time to watch the media here act like they have always felt this way about President Bush, the way they are lionizing him and eulogizing him today. When in fact… He didn’t get the Reagan treatment.  He didn’t get the usual conservative Republican treatment, but he got it.  He nevertheless was ripped and criticized no matter how hard he tried to accommodate the left, Democrats, and the other side.

And it’s an effort here to rewrite history for people who weren’t alive or old enough during Bush’s presidency, in their quest here to continue to portray the current occupant of the White House — and they did this with Ronald Reagan — as somehow unfit and indecent.  But it was still, despite all that, a tremendous opportunity that I had to get to know them and be welcomed in to the inner sanctum of the Oval Office and their home and the White House during both the presidency of George Bush 41 and George Bush 43.