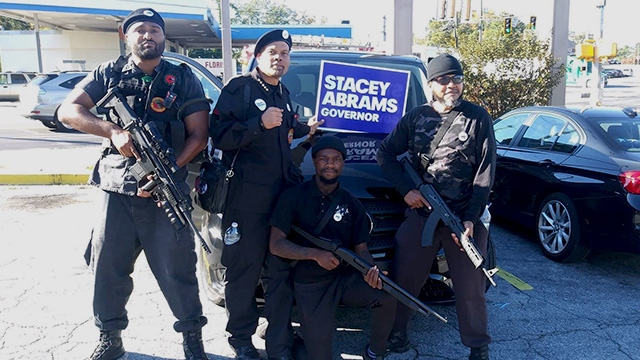 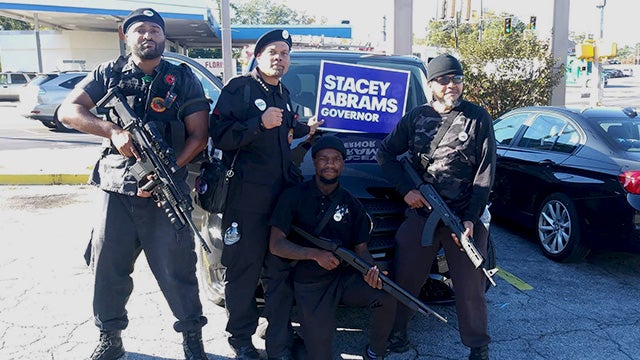 RUSH: So I got here today and I started doing show prep, and I find some pictures of a bunch of military-looking guys all with Stacey Abrams signs. I mean, these guys are wearing camo and they’ve got serious weapons. They’re running around with serious weapons, and they’ve got Stacey Abrams for governor signs all over the place. She’s running for governor in Georgia. It turns out that it’s the New Black Panther Party. The New Black Panther Party has openly and willingly been photographed armed to the teeth looking very threatening and intimidating in the process.

And the message is you better be voting for Stacey Abrams or there could be trouble. Now, we have history here. In Philadelphia, it was 2008 or 2012, the New Black Panther Party in Philadelphia was obstructing voting places in traditional Republican areas, I believe. And Eric Holder… I mean, it was clear voter intimidation, and Eric Holder, the Obama attorney general, decided, “You know what? We’re not gonna prosecute my people.” What did that mean, our people? Is he a member of the New Black Panthers?

He meant, “We’re not gonna prosecute African-Americans. They have a tough enough row to hoe as it is. We’re not gonna prosecute ’em,” and that led to some resignations in the Justice Department, civil rights division, including J. Christian Adams, who quit because of this. Now these guys are back, and these pictures have four or five of them each, in there looking very threatening and menacing. We have a story: “Armed with Assault Rifles, Black Panthers March for Stacey Abrams —

“Members of the Black Panther Party marched through the city of Atlanta, strapped with assault rifles and brandishing Stacey Abrams campaign signs. In a video posted on the group’s Facebook page on Saturday, members of the Black Panther Party are seen marching through the West End neighborhood of Atlanta in support of Stacey Abrams gubernatorial campaign. As they marched, the Black Panthers carried assault rifles and continually shouted slogans such as ‘black power’ and ‘power to the people.’ …The video shows the panthers marching for nearly 30 minutes through the city of Atlanta until they enter a local radio station.”

So this is a clear effort to scare or intimidate people, and they’ve used it before. I don’t know what Stacey Abrams’ position on this is. She’s probably downplaying it thinking it’s no big deal. If it were me, I’d be disavowing it. But I guess she can’t afford to do that.