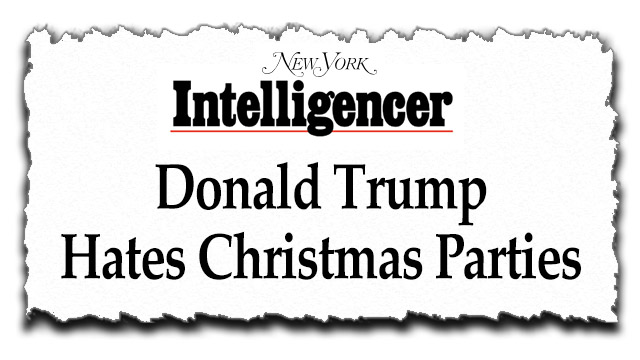 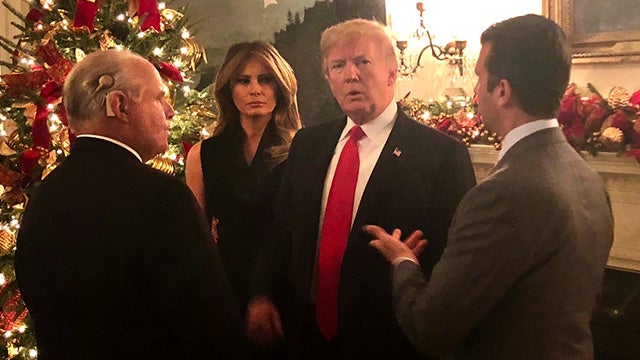 RUSH: Oh, folks! I just remembered this. I was watching CNN this morning. To think how bad this all is and now add this to it. There’s this infobabe at New York Magazine. Her name is Olivia Nuzzi. (interruption) You know, my watch… I’m gesticulating in here wildly and my watch thinks that I’m falling. So it alerts me, “If you’ve fallen and you don’t respond in 30 seconds, we are calling EMS.” So I have to tap on “I didn’t fall. Leave me alone.” 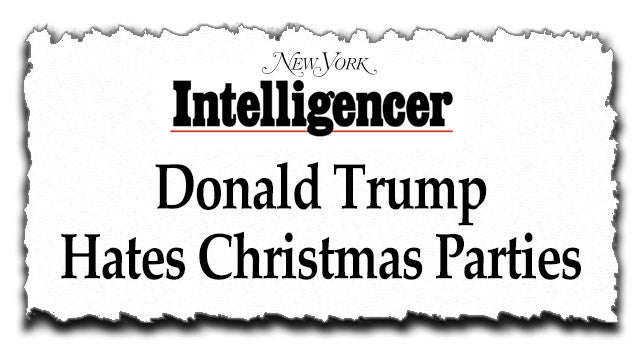 He can’t stand all this attention for an entire month on somebody other than him, and the infobabe on CNN interviewing her kind of cocked her head. “Well, that’s what people in the White House are telling me! That’s what I’m hearing from inside the White House!” Magic words. She’s not hearing it from anybody! And if somebody did tell her that it’s a joke but the left has no sense of humor whatsoever. So, in addition to everything else — every other rotten characteristic of Donald Trump — now he’s jealous of Christ because Christ gets an entire month of attention focused on him, and Trump doesn’t get enough.

She was seriously selling this. She was seriously making this point. These people are… They’re out of their minds, off their rockers. They are determining policy for this country. She may be a journalist, but she’s no different than a left-wing Democrat hack. “Trump jealous of Jesus! Doesn’t like Christmas parties!” Let me tell you something. I was just at the White House. I was there on Monday. It was a Christmas party. I saw the president. He wasn’t fuming. He was standing in line. 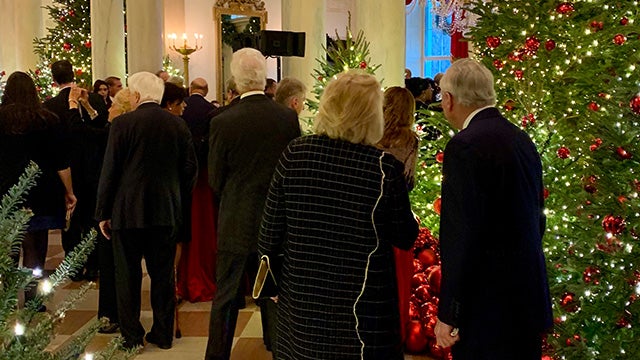 Let me tell you what these Christmas parties are, and you tell me how you’d react to this. For the month of December until about… I think this is the last week. So it would be three weeks in December. Tuesday, Wednesday, and Thursday (and sometimes Monday) there are two parties. One starts at four. The second one starts at seven. The president and first lady do not mingle at the part. They stand downstairs in front of a camera, and anybody there who wants a photo gets in line.

Everybody that wants a photo gets a few seconds to chat with the president and first lady. Four hours, four hours a day. Now, at the reception on Monday, Trump left the line and came up and actually addressed the crowd. They put a microphone up and a little podium and he came out and said some things to people and then went back down to the line. I check saw him complain. I never saw him look disgusted. I never saw him portray that he resented being there. After all, he was the focus of attention!

Everybody that was there wanted to meet him! Yet we’re told today on CNN he’s jealous of Jesus! For crying out loud. So I saw him having a grand old time. He was nice to me. We chatted a few seconds in the line. There’s a photo of it at RushLimbaugh.com. Donald Trump Jr. posted it on his Twitter feed, I guess. I didn’t see anybody that was unhappy. I didn’t see anybody that was mad. Trump and the first lady were in fine form. They were greeting everybody pleasantly. So it’s just a bunch of made-up fake news.

These people just… They have no boundaries. They just have to keep crossing lines to the point now that it’s gotten ridiculous.

RUSH: Here’s, by the way, the audio sound bite. It’s Olivia “Newsy” or “Nunzzi.” I don’t know how to pronounce this. When I saw this… You know, I normally don’t have the sound on because sound irritates me. It’s a fact of life with my cochlear implant. Noise jsut irritates me so I watch TV with closed-captioning. Sometimes I turn on the audio, but it’s just annoying. I saw this, I’m reading the closed-captioning, and I’m not believing what I’m reading. So I did trick with the 10-second, 20-second rewind and listened to this.

This is the woman who said that Trump doesn’t like Christmas parties because he’s jealous of Jesus. He’s jealous that Jesus gets all this attention and he, Trump, doesn’t get any. So here we go. The Fill-In Host was somebody named Erica Hill, and she’s talking to — (interruption) Oh, it’s “Nutsy”? It’s pronounced “Nutsy”? Well, that makes sense. New York Magazine Washington correspondent Olivia Nuzzi talks about her article that President Trump hates Christmas parts.

New York Magazine article: “Donald Trump Hates Christmas Parties.” Trump hates everything, right? So the Fill-In Host as CNN says, “Now, in your piece, a person described as ‘close to the White House’ said that perhaps part of the issue is that these parties are not necessarily about Donald Trump. Of course, to some degree they are. People are invited to the White House. They may get to meet the president. That’s a big moment for a lot of people. Overall they’re not about the president?” 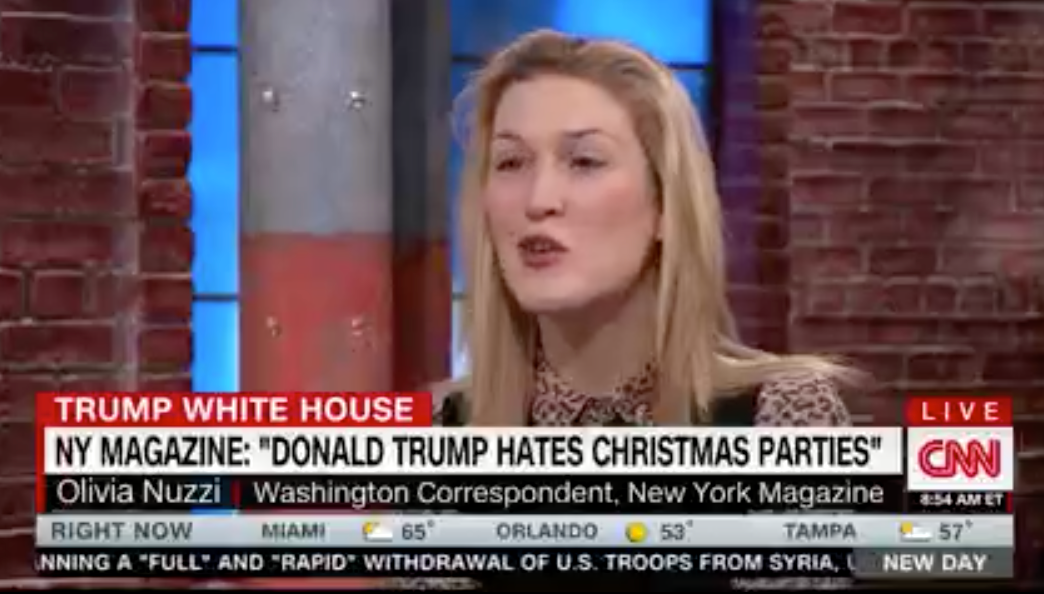 NUZZI: This person went on to say that Christmas is about, quote, “the Lord Jesus Christ,” and it’s not about Donald Trump. Umm, and that may explain his sort of aversion to celebrating this on a regular basis, but it wouldn’t surprise me to talk about Christmas all the time, I don’t think… He’s not very good at being on topic when the topic is not Donald J. Trump.

RUSH: This is just… Uhh, I’ve run out of adjectives to describe this. It’s beyond unbelievable. It’s beyond incredible. It’s indescribable, this kind of thinking. If there’s anybody in the White House telling journalists, “Oh, yeah, Trump doesn’t like parties because he’s jealous of Jesus,” then somebody’s cracking a joke — and these left-wing Democrat hacks disguised as journalists, the one thing we know they don’t have is a sense of humor. If somebody actually said this, then Olivia Nuzzi fell for it.

You how many brain-dead dummkopfs are gonna believe this once it hits social media and hits Millennial news sources? Do you know how many people gonna buy into this totally ’cause they’ve been conditioned to think this way about Trump already? We’ll find out if it’s true. You know, Trump goes to church Christmas Eve when he’s here in Palm Beach. We’ll see if he tells the pastor to scrub the Christmas sermon and do one on him. We’ll see if that happens. He goes to Bethesda by the Sea down there. They put this giant camera farm up across the street. 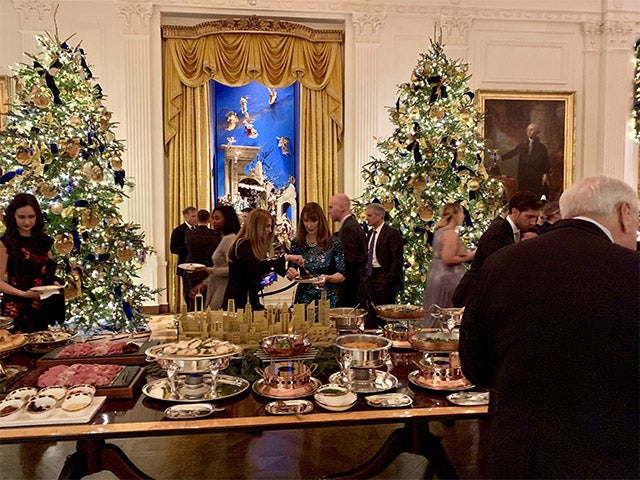 Trump goes to midnight services on Christmas Eve — I guess, you know, so he doesn’t have to wrap presents. Maybe the staff can do that while he’s at church ’cause Trump hates Christmas. So he’d assign the staff to do so all that drudgery associated with it, while he’s out making people think that he believes in Jesus when he’s actually jealous of him! For crying out loud. These people have no sense of shame or embarrassment to any degree whatsoever. I watched ’em on TV today and I could not believe it — and then I did, because it did happen.