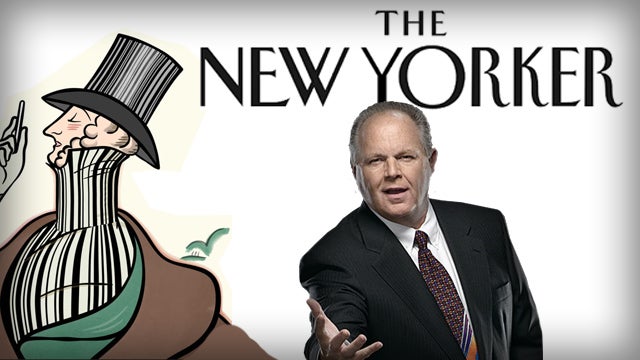 RUSH: Here’s the story. I think this is The New Yorker. It sadly didn’t print. Susan Glasser. Headline: “The 2020 Election, a Race in Which Everything Happens and Nothing Matters — If a pandemic that has killed nearly two hundred thousand Americans can’t significantly hurt Trump’s support, can anything?”

Do not doubt me, my friends, when I tell you about these people and what motivates them. They are so frustrated, they can’t see straight. They literally have launched everything they’ve got, including this latest absolutely slanderous and libelous allegation that Trump thinks American soldiers who have lost their lives and are dead and buried in cemeteries are losers and suckers.

They’ve thrown everything, and they can’t damage Trump at all within his base. And that has been the objective. They’ve known that if they could somehow get just a small percentage of Trump’s base to abandon him, then they would have a chance at defeating him in the 2020 election. 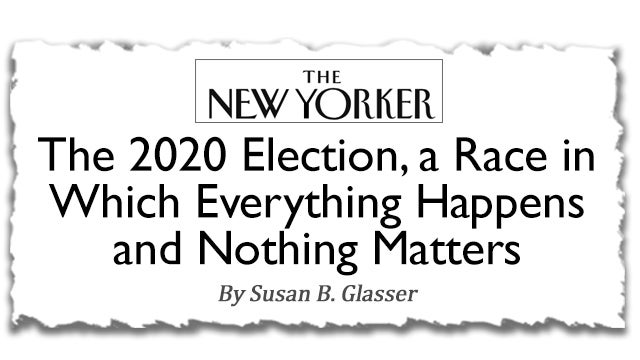 But this woman’s so frustrated. Here’s how her piece begins: “Does anything matter anymore in American politics? In the week since Donald Trump’s Convention ended with a personality-cult party on the White House lawn, the President has completely refocussed [sic] his campaign on threats to law and order from ‘Rioters, Anarchists, Agitators, and Looters.’” Which is exactly what they are. She even disagrees with that. “He has suggested there will be a ‘Rigged Election.’” Well, you people are trying to rig it. What the hell do you call refusing to accept the results from 2016? You’re still trying to rig that.

If you could, you would have reversed those election the results, Ms. Glasser. You people are everything Trump says about you. Then she complains that Trump has “urged supporters in North Carolina to commit election fraud, by voting twice…” No. This is Trump’s own version of Operation Chaos. He says vote twice, let’s run a test. Let’s actually see what happens when you vote both ways. How can it be an attempt to rig the election when you tell everybody what you’re doing up front? It’s obviously a test. It’s also meant to tweak them. It’s also meant to provoke this kind of reaction, which it did.

“The president personally ordered a review of federal aid, with the goal of withholding funds from ‘anarchist’ Democratic-run cities that have allowed ‘themselves to deteriorate into lawless zones.’” Here she’s quoting Trump. “And he has baselessly alleged that his Democratic opponent, Joe Biden, is taking some sort of ‘enhancement’ drug, and claimed that Biden is the pawn of shadowy ‘dark forces.’”

And she’s sitting there, and she is stunned that none of this is harming Trump. Ms. Glasser, if I may — and I’m addressing you specifically, purposely, and I’m trying to do this respectfully. You need to eliminate some of your arrogance. You need to start asking, why do Trump supporters believe these things? For example, Joe Biden is the pawn of shadowy, dark forces. I believe that too. I just wouldn’t put it that way.

I don’t think Biden is actually running his own show because he’s not capable of it, Ms. Glasser. There are people who wanted Biden to win the nomination for whatever electability reasons. There isn’t anybody else in that Democrat primary that showed they had the ability to even win the nomination, much less defeat Trump. Somebody is writing on the teleprompter what Biden is supposed to say.

There is somebody — and we don’t know who they are, Ms. Glasser, and that’s why this is important. Joe Biden is not gonna be the president even if he wins the election. Somebody else is going to be, and we don’t know who they are. And they’re gonna have immense power. They’re not having to campaign. They don’t have to identify themselves. They don’t have to personally put their necks on the line raising money. Biden is the front man. The deal was with Bernie Sanders, if Biden adopts the Bernie agenda, then Bernie will send his supporters to Biden.

So we know that whoever is running this show is hell-bent on a radical, leftist agenda and that Biden is the placeholder for it. Trump is simply acknowledging the fact that there are people running the Biden campaign and not the campaign manager and not the consults. There are people who have not identified themselves. We don’t know who they are.

That’s all Trump means. It’s not something dark and sinister. It’s not conspiratorial. It simply has to be the case because Biden is not mentally capable of orchestrating or leading or managing something as massive as a presidential campaign on a day-to-day basis.