RUSH: Folks, here is further evidence that Stand Up for Betsy Ross isn’t going away. It’s only going to grow. And, by the way, Kathryn’s gonna shoot me here, but we’re working on so many new ideas, design ideas and so forth, that we have in the hopper now. Not ready to announce anything, but some of the stuff we’re looking at, some of the stuff we’re designing is hot, hot, hot. And it’s an ongoing process.

We’ve got a brand-new blue, navy blue fleece sweatshirt, a cotton V-neck, long sleeve navy blue, royal blue T-shirt for women and girls that has been added to the EIB Store at RushLimbaugh.com. Proceeds go to the Tunnel to Towers Foundation. They’ve already seen a donation from us, from you, $4 million since this all began on July 8th, and it began because of Nike responding to pressure from a failed, third-string quarterback, Colin Kaepernick, who didn’t like their new shoes.

They introduced some new shoes for the Fourth of July, tennis shoes, sneakers, had the Betsy Ross flag to the heel. Kaepernick said, I don’t like that. They shelved ’em. In fact, I think the whole thing was a PR scandal. I don’t think they ever intended to release the shoes.

So, anyway, we came up with Stand Up for Betsy Ross. The Betsy Ross’s flag’s not political. It’s the first official flag symbol of the country representing unity, for crying out loud! And so Stand Up for Betsy Ross was born. People wanted to push back. And man, oh, man, over 350,000 T-shirts and related items since July 8th and counting! I don’t talk about it every day ’cause it has its own momentum and I don’t want to drive you crazy with it. But look at this.

“Nike has withdrawn Houston Rockets sneakers and other merchandise from stores in major Chinese cities after the basketball team’s general manager tweeted in support of Hong Kong pro-democracy protesters.” So they’ve done it again! This time you can’t buy Houston Rockets logoed sneakers in China! Nike has pulled — why? ‘Cause they don’t want to irritate the ChiComs. So they’re helping to destroy a brand, well, a subsidiary. The NBA is the brand, the Rockets are one of the franchises.

So they’re punishing the Houston Rockets because of the tweet from the general manager, all to make sure the ChiCom government doesn’t get mad at ’em. “Rockets general manager Daryl Morey had defended the Hong Kong protesters in a tweet, which he subsequently retracted. Morey then posted a statement saying he hoped ‘that those [Chinese fans] who are upset will know that offending or misunderstanding them was not my intention.’” 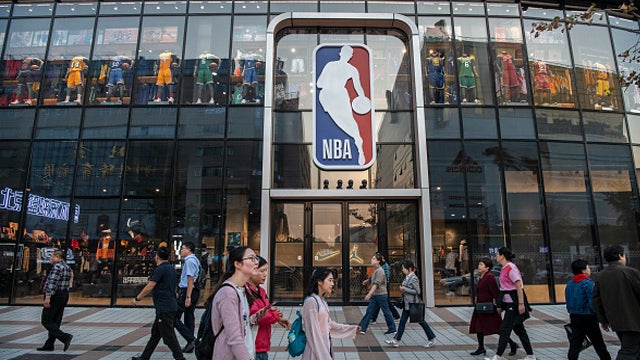 Major Chinese online retail sites, including Alibaba. You know who runs Alibaba, a guy named Jack Ma. You ever seen Jack Ma? You’d need four of him to reach the rim on a basketball goal. Tiny little guy. He’s one of the wealthiest people in China. Alibaba and J. D.com also removed Rockets merchandise. Taking it off Alibaba is like taking it off Amazon in China. And a search on the site for sneakers with just the NBA logo turned up zilch, zero, nada results.

The NBA is said to make $4 billion in revenue in China. The Chinese market’s also crucial to Nike’s business. Remember what Jason Whitlock said, that the shoe companies are running the NBA and college basketball. And the Chinese are using the shoe companies to infiltrate the culture, the pop culture of the United States. So Nike, I mean, you keep giving us a reason to Stand Up for Betsy Ross, to stand up for America, to push back against you.