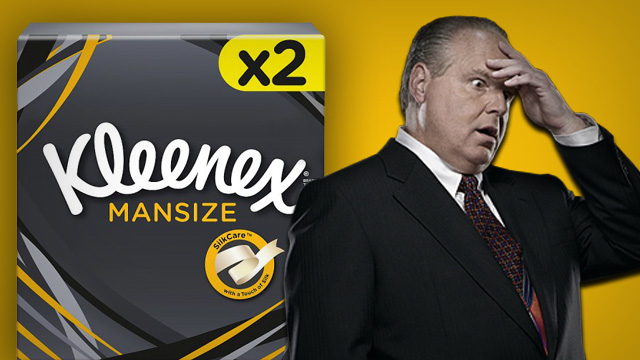 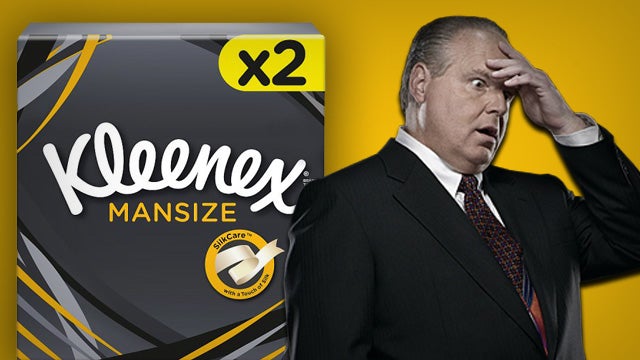 RUSH: Look at this: “Kleenex Renames its ‘Mansize’ Tissues as ‘Extra Large’ After Complaints.” Who would care? The idea that there are people walking through drugstores and grocery stores offended by a box of Kleenex with the words “mansize” on them? What kind of people are we talking about here? Kleenex, of course, is bowing to the pressure of what? One-tenth of 1% of the population, made to look much better than it is by a compliant and willing, insane media.

“Kleenex is scrapping its ‘mansize’ tissues branding after consumers complained that it’s sexist. The company said it’s changing the name of the tissues to ‘Kleenex Extra Large’ following feedback from customers. Kimberly-Clark, which owns Kleenex” and makes the things “said that it succumbed to growing public demand.” Let me tell you something: The people that have time to complain about this are not the people you want to be letting run your business!

This has always amazed me. The cowardice, the fear that runs companies. Stand up to this! This is nowhere near a majority of Kimberly-Clark customers. It’s made to look like that. It “succumbed to growing public demand” and changed the name “despite not believing itself that the branding endorses gender inequality.” So Kleenex is saying: Are you kidding? “Mansize” is not meant to be critical of anybody! But, okay, we’ll change the name, if it makes you unhappy.

(Snort!) “The new boxes are to be renamed ‘Extra Large’ following complaints the name was sexist. Kleenex for Men first launched in 1956 with the claim that they would ‘stay strong when wet.’ However, consumers have tweeted Kleenex to ask them why its products still use the term ‘mansized.'” This is a campaign! Nobody normal would start a campaign on something like this — and by “normal,” I mean, with normal things to do, during the day and in life.

These are people that have been activized, propagandized, weaponized in college or in school by deranged, lunatic professors. And it could be parents, by the same token. This stuff is absolutely ridiculous. It’s embarrassingly ridiculous. Mansize… Snerdley, have you ever bought mansize Kleenex? (interruption) Well, you know what? I’ve known they are out there, but my staff never buys them. You know, in fact, I wish the staff would. I could use ’em!

I have to blow my nose a lot. My point is, when you’re going to the grocery store for people that do that and you see “mansize,” you don’t think gender things. You’re not thinking that. You just think, “Oh, man, that must be pretty big.” You’re not thinking anything discriminatory. When you run through the grocery store, people that go to grocery stores, when you run through the Kleenex aisle and you see standard-brand Kleenex that don’t have the word “mansize” you don’t think, “Ah, those are the tiny ones for the women.”

You don’t think that.