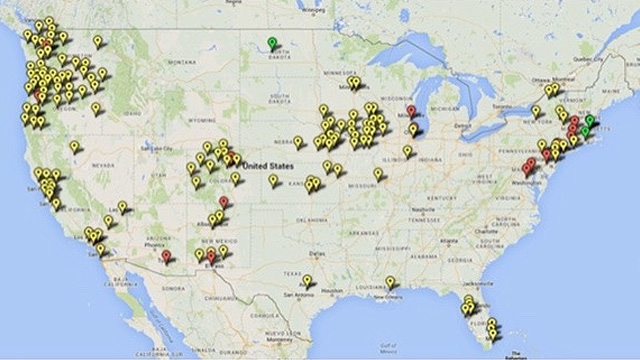 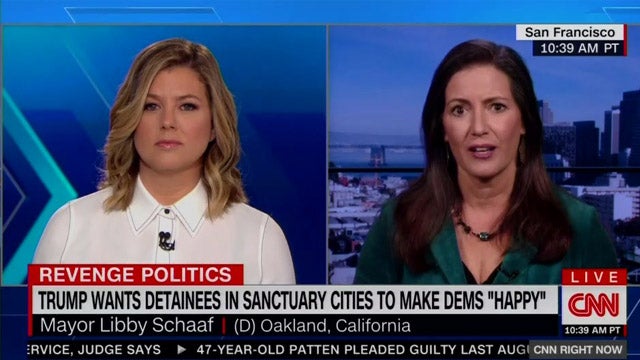 RUSH: Right before the last hour ended, one of the staff there, “Rush, you don’t want to push this! You don’t want to push this! It’s already bad, West Palm Beach is a sanctuary city.” I said, “No, no. You got to follow through on this. Stick with me on this. Besides, I don’t live in West Palm Beach.” I’m just kidding. I do drive through it. Blindfolded, but I do drive through it. Just kidding.

Here is this thing. The mayor of Oakland has weighed in on this, and she ain’t happy about it. See, this is exactly — I knew this. They’re not gonna welcome these people. They’re not gonna respond to this like you would think. What are these sanctuary cities, how do they build themselves up? They are seats of compassion, right? 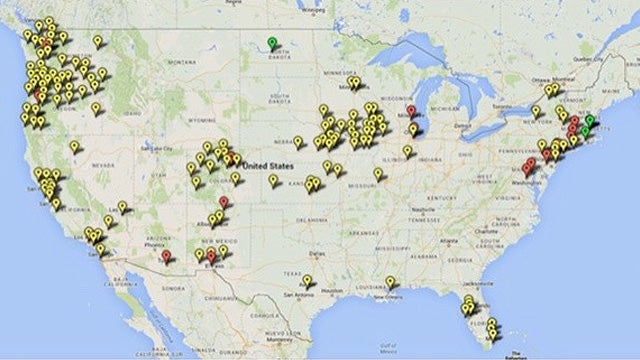 That’s their attitude. The mayor of Oakland even warns illegal aliens when an ICE raid that she hears about is planned so that they can hide from the ICE agents. But before getting to the audio sound bites from the Oakland, California, mayor, who now also has to put up with Antonio Brown. He got traded from the Steelers to the Raiders. So she’s got an even tougher gig.

But the reason — just gonna sit here and say it — even in West Palm Beach, the reason they are not going to support this, the reason these sanctuary cities are not gonna support it, an influx of new gifts of love transferred to them by President Trump will deplete resources. They’re already running short on resources anyway.

You talk about city and state social services? These sanctuary cities know full well that they will not be made stronger by the arrival of these people that don’t speak the language and therefore can’t really be productive. So these cities will become even weaker, and if they’re on the verge of falling apart, that will be exaggerated or advanced, ’cause they can’t handle it. They couldn’t handle an influx of brand-new illegal immigrants. They’re already bursting at the rafters here, just like our country can’t!

Our country can’t deal with this much longer just like these sanctuary cities can’t. Folks, I’m telling you, that’s why it would be such a great experiment. It would put the left to the test! Oh, so you oppose enforcing the law, huh? Oh, so you think we ought to not even have borders, eh? Oh, so you think that these are wonderful citizens, future citizens that we need to extend more benefits to them so even our own citizens, especially the children — well, let’s put ’em to the test.

Let’s do this grand experiment and allow the people that run these sanctuary cities to show us how it’s done. Let’s have them, who run sanctuary states, show everybody how it’s done. Let them demonstrate how we’re all panicked over nothing. Let them show us that all this is is a grand opportunity.

It isn’t a problem. We’ve always said that states are where little experiments should take place. The laboratories to test various policies are in the states. We see if they work out, we build on them and make them national. That’s why we know the California way is not the way for the rest of the country.

So let’s do this! Let’s set up a bunch of labs in these states with newly arrived sanctuary city residents, gifts of love brought to them by President Trump and ICE. It would overwhelm their housing. You know what else it would do? It would create an even bigger war with existence minorities.

You know, there’s already a lot of pressure on these sanctuary cities, these states that are left wing Democrat because they’ve created this permanent underclass that’s made up of all kinds of people who already are making their demands on all levels of government known — state government, city government. They’re demanding this benefit and that benefit, and now throw some new people in the mix with their demands? 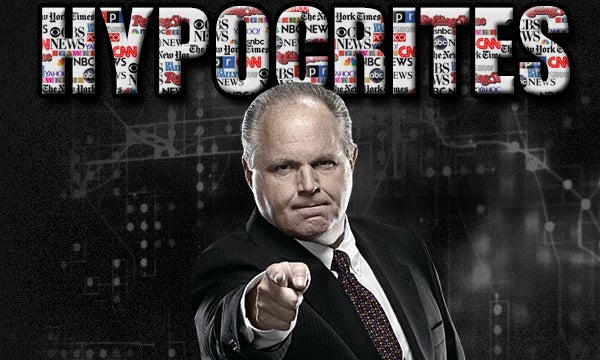 You think the existing minorities and people in need in these cities are just gonna sit by while the new arrivals get everything? It would overwhelm law enforcement. A great experiment here, folks. It would be a great illustration of how liberalism doesn’t work, how endless compassion, how violation of American law, how the supposedly moral values of the left do not work.

Think there’d be enough jobs? We start transplanting illegal citizens, illegal aliens who are deigned at the border, transplant them in sanctuary cities, do you think there will be enough jobs for those who want to work? Most of them aren’t skilled in doing anything, and most of them are not gonna be able to speak the language.

But the left says that they’re the future. The left says that they’re the backbone of America. Well, let’s see. Oh, and, by the way, the amount of health care services to treat the tons of diseases — measles is popping up in some of these areas. There are some sexually transmitted diseases, you know, things we’ve wiped out in our country are being reintroduced to our country by these caravans. Do you think we’ve got the medical infrastructure to deal with this? We’ve succeeded stopping a bunch of this with immunizations that they don’t get.

It would be a fabulous experiment, folks, fabulous. The only problem is the Democrats will demand that the federal government give them tons more money to handle this. Trump can say, no, no, no, no. No, no, no. Sanctuary cities by law don’t get money. You got handle this on your own.

Let’s go to the audio sound bites. The mayor of Oakland was on CNN with infobabe Brianna Keilar. Question: “Tell us your reaction to this report that the president is planning to bus immigrant detainees to sanctuary cities like yours.”

LIBBY SCHAAF: This is an outrageous abuse of power and public resources. The idea that the administration thought in any way that it would be acceptable to use families and children, human beings as political retribution against their enemies, should infuriate every American regardless of political affiliation. And I am proud to be the mayor of a sanctuary city. We believe sanctuary cities are safer cities.
RUSH: Wrong.

LIBBY SCHAAF: We embrace the diversity in Oakland.

LIBBY SCHAAF: And we do not think it’s appropriate for us to use local resources to do the government’s failed immigration work.

RUSH: What an absolute hypocrite! It’s “an outrageous abuse of power and public resources… us families and children — human beings — as political retribution … I am proud to be the mayor of a sanctuary city. We believe they’re safer…” Well, then bring ’em in! “We embrace the diversity.” Bring ’em in! “We don’t think it’s appropriate for us to use local resources…” Oh, of course not. (laughing) Of course not. These people are standing on balsa wood. They are standing on foundations of balsa wood.

SCHAAF: The data is very clear that immigrants — and even undocumented immigrants — commit far fewer crimes than non-immigrants. The data is clear. Sanctuary cities like Oakland are actually getting safer. Uh, we believe that there is safety and harmony in diversity and inclusion. But what’s really outrageous is the way that this administration continues to use petty politics and really just vitriolic rhetoric to advance a racist agenda. This is not American.

RUSH: What’s racist about this? “The data is clear: Sanctuary cities are actually getting safer.” What a crock! “We believe there is safety and harmony in diversity and inclusion”? You better include breaking the law, because that’s what you’re doing! You’re in open defiance of the law! You’re telling people they can escape American law by coming to your beautiful, diverse, safe city. Well, then why don’t you want more? If they’re making Oakland so great, why are you rejecting an offer to bring even more diversity and more safety and more inclusion to your lovely city?

See, this is the purpose of the experiment. She is rejecting the opportunity to have even more of what she claims is making her city great! She claims her city is great. It’s safer, it’s diverse, and it’s inclusive because they let illegals in without penalty. Well, then, how about even more? It’d be even safer and more inclusive and more diverse — and, of course, everybody would be happier. And the more you bring in, the more your crime rate will drop, because she says, “The data is clear: Illegal immigrants commit less crime” than reprobate Americans.

Well, fine! Make your city crime-free by bringing in even more illegals. This is the purpose of the experiment: You make them justify what they’re doing. You make them sing the praises of what they’re doing, and then you make them reject the opportunity for more of what’s made them great, which makes you scratch your head. “Wait a minute. If illegals have made your city great and safer and more diverse, what’s wrong with more?”

“Because Donald Trump is bringing them.”

Ohhhh, because Trump’s behind it? I see. So it isn’t really about the people you care about.

RUSH: By the way, you might be wondering where she gets her numbers on illegal immigrants commit fewer crimes than regular citizens. She says, “The data is clear.” The only data that has ever claimed that illegals commit the same or fewer crimes than citizens is some study that was done by the libertarians at the Cato Institute. That’s the only place it’s ever come from. The Cato Institute is a bunch of libertarians. They are for open borders because it’ll make weed cheaper.