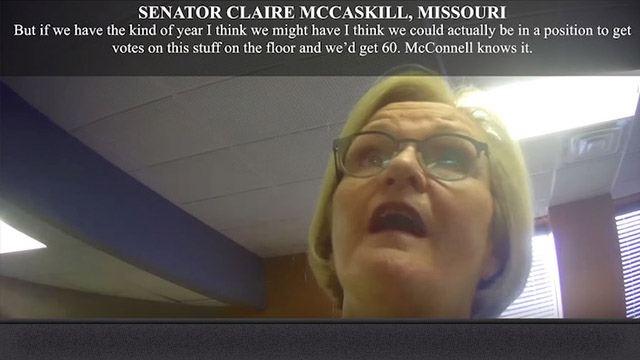 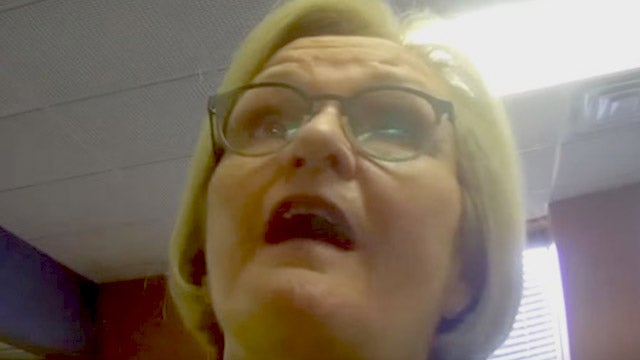 RUSH: James O’Keefe and Project Veritas has exposed the blatant hypocrisy of Missouri Senator Claire McCaskill in a secret video, series of videos in which McCaskill herself and her staff are seen and heard — in her own words — talking about gun control, magazine control, all aspects of guns. She is heard and her staff are all heard saying things to the effect that she can’t be honest about this and still get elected. 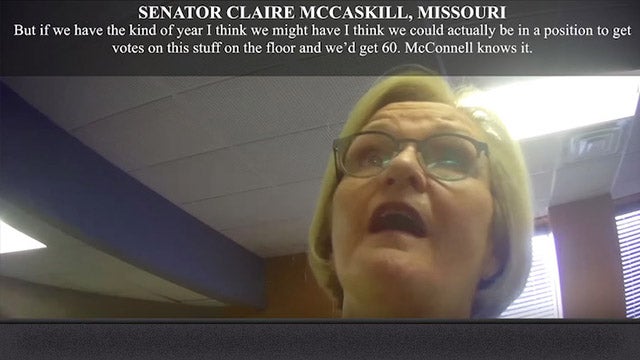 So she’s not telling her constituents in Missouri the truth on a number of issues, including gun control. She is much more anti-Second Amendment in truth than she admits to being. Now, the fascinating thing about this is that there aren’t any news outlets in Missouri who are using this James O’Keefe Project Veritas video, and so many Missouri citizens are not aware of it. Ah, I wouldn’t go so far as to say it’s a media blackout, but it’s not gonna approach being covered in the Drive-By or mainstream press.

So that’s pretty much the sum total of it.

RUSH: Now, I’ve got the audio here of James O’Keefe, the secret audio taken of Claire McCaskill and her campaign aide, Rob Mills. This is important because this news is not being reported in Missouri, which is Claire McCaskill’s state. It also happens to be my home state. Now, what we did here, we went and he did a Google search for news of the secret video from Project Veritas of Claire McCaskill, and we wanted to see where this Veritas news had been reported.

There’s nothing else. No Yahoo News, nothing. Not one Drive-By or mainstream media outlet shows up in a Google News when you Google “Claire McCaskill” and “Project Veritas.” Every site running this would be a conservative site or a conservative blog. There’s not one mention of St. Louis papers or TV stations here. What it basically is McCaskill recorded on secret video admitting that she cannot tell Missouri voters the truth of what she really thinks about things like gun control because she might not get elected.

McCaskill: (background noise) But if we have the kind of year I think we might have, I think we could actually be in a position that we could get votes on this stuff on the floor and we’d get 60. McConnell knows it. He just doesn’t want to put it on the floor because then it goes to the House and then it’s awkward because all those House members are total NRA folks.

UNDERCOVER JOURNALIST: So you would be on board with — with bump —

MCCASKILL: I’ve — I’ve voted for most of those things before.

UNDERCOVER JOURNALIST: For a ban?

RUSH: Were you able to hear that? Were you able to understand what she was being asked and her answer? (interruption) Okay. All right. Let me read it to you ’cause I couldn’t. I would not be able to make sense of that, even though I’ve got a direct audio feed. That just sounded like noise to me. But here’s the transcript. (summarized) She said, “If we have the kind of year I think we might have the Democrats winning big, we could actually be in a position we could get votes on this gun stuff on the floor, and he could get 60, and McConnell knows it! 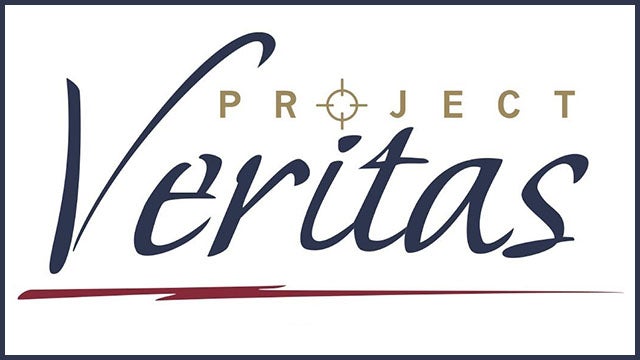 “He just doesn’t want to put it on the floor because then it goes to the House, and then it’s awkward ’cause all those House members are total NRA folks.” The Veritas journalist: “So you would be on board with bump stock…?” “Oh, of course! I voted for getting rid of bump…” “What about high-capacity mags?” “I have voted for most of those things. Absolutely get rid of high-capacity mags.” “What about for an outright ban?” “Oh, yeah! An outright ban? Oh, yeah!”

You’ll never hear Claire McCaskill campaign this way. She’ll say, in fact, that she’s very open to the idea. “Bump stocks? Yeah, might have get rid of them. Everybody’s on board with getting rid of bump stocks. But start talking about limiting mags and banning things? No, no, no, no, no. You can’t say that! You might lose votes in the Bootheel!” But you know what she said about that? She said (summarized), “If we could really sweep up in St. Louis, if we could clean up in Missouri, I could lose some votes in the Bootheel.”

Now, St. Louis is majority Democrat, heavily minority populated, and she’s basically saying, “If I can sweep up with the African-American vote in St. Louis — if I can really clean up, get big turnout there — then I can stand to lose some of the votes the Bootheel.” So you in the Bootheel of Missouri are Claire McCaskill throwaways, if she can just really clean up in St. Louis. Here is a campaign aide for McCaskill explaining to the Project Veritas secret journalist that Senator McCaskill cannot openly saying any of these things.

RUSH: (translated) “She can’t openly say that. It, like, could hurt her ability to get elected.” Now, none of this comes as a shock to me. None of this comes a surprise to me. My entire life I have been observing that, for the most part, the Democrat Party cannot be honest about what they really intend, although, with the advent of Obamaism and the election of Obama, I think they started feeling their oats.

In the run-up to the 2016 election, I think those blinds came down. I think the camouflage and the mask came off. They were so certain that Hillary was gonna clean up, wipe Trump out in a landslide, that they threw caution to the wind, and they were being open about the things they were gonna do — and look what happened to ’em! They ended up getting shellacked. So now they’re back to having to hide it, which has been their standard modus operandi.