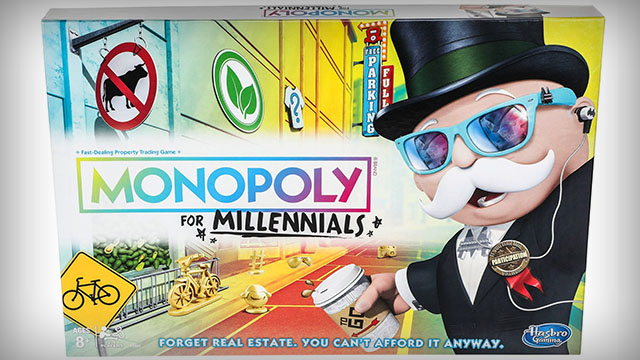 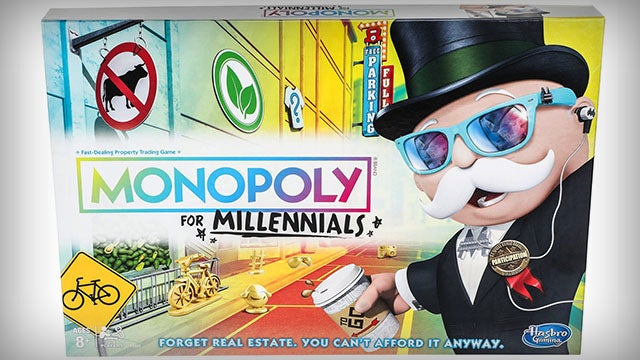 RUSH: A couple little lighthearted things here. You know, Hasbro makes the board game Monopoly, and they’ve come out with a new version called Monopoly for Millennials. It’s really fun, and Millennials are fit to be tied about it apparently on Twitter.

They’ve geared this game to come out just in time for Christmas. “Monopoly for Millennials, Hasbro’s newest addition to the Monopoly board game empire, is receiving widespread backlash from offended Millennials shortly after the game was released for the holidays. The game cover, accompanied with the tagline ‘Adulting is hard. You deserve a break from the rat race,’ features a ‘cool’ Mr. Monopoly.” You know, the rich guy with the top hat and tails, big, round face, Mr. Monopoly.

“He’s taking a selfie, wearing a ‘participation award’ pinned to his chest, and drinking a latte. A camera, a pair of sunglasses, and a hashtag are included among the game pieces.” So is a bicycle. (laughing) Yoga positions and so forth. There are no properties for players to buy in Monopoly for Millennials. There is no Park Place. That’s been replaced with a three-day music festival. Other experiences include a vegan bistro you can buy, a bike share, and a yoga studio.

“There’s also no rent to pay and no real estate to buy because, as it says on the front of the box, ‘Forget real estate. You can’t afford to buy it anyway.’” This is Monopoly for Millennials. The game, on the board box, recommends that you play it in your parents’ basement. Can you believe they did this? This is a major American corporation. I mean, they’re really shading some of these Millennials. They’re throwing it right back at them.

I’m wondering how this happened. You know, this is the kind of thing that you do not see, actually taking aim at a specific whole generation. I mean, Millennials are apparently righteously indignant and profoundly intimidated about this on Twitter. You know what the price of the game is? $19.82 because that’s said to be the first year of the Millennial generation, 1982, when they were born.

Here’s the game’s description. “Money doesn’t always buy a great time, but experiences, whether they’re good — or weird — last forever. The Monopoly for Millennials game celebrates just that. Instead of collecting as much cash as possible, players are challenged to rack up the most Experiences to win. Travel around the gameboard discovering and visiting cool places to eat, shop, and relax. Interact with other players via Chance and Community Chest cards, (which are super relatable). And players don’t pay rent — they visit one another, earning more Experience points. This board game is a great way to bring a fun and relaxed vibe to a party or casual get-together.” 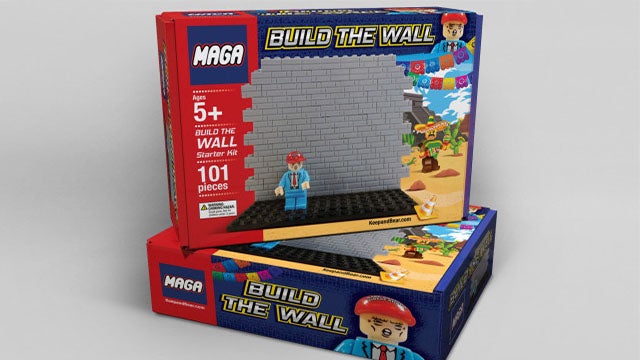 It says here, “The game’s theme didn’t go over too well with a lot of people. After news of the game started creeping across social media, Hasbro took some serious heat from the very generation it was probably hoping would find the game amusing. Reactions from angry Millennials, as well as those who just thought the game was just in bad taste, flooded Twitter and other social media platforms, calling out Hasbro for the ‘offensive’ and ‘condescending’ board game.”

But despite all this, the game is sold out. You can’t find a copy of the game anywhere. To be played in your parents’ basement. There aren’t any cars. The board pieces are like bicycles and bike racks and no property to buy and no rent because nobody’s got any money.

And this is not all. There is a new toy for kids called Build the Wall and it’s from an outfit called KeepAndBear.com. “We are pleased to announce the launch of a brand new line of toys: MAGA building blocks! This set comes with more than 100 pieces including President Trump in a MAGA hard hat!”

You know the game is? Build the Wall. Your kids can buy a game, and they can actually build the wall. “The $29.95 Lego knock-offs — emblazoned with 45’s ‘Build the Wall’ mantra — are available for pre-order now from the home of ‘the best selection of Trump gifts anywhere!’ Shipping starts Nov. 23.”

So you see, my friends, we have our share of people out there throwing shade at the left.