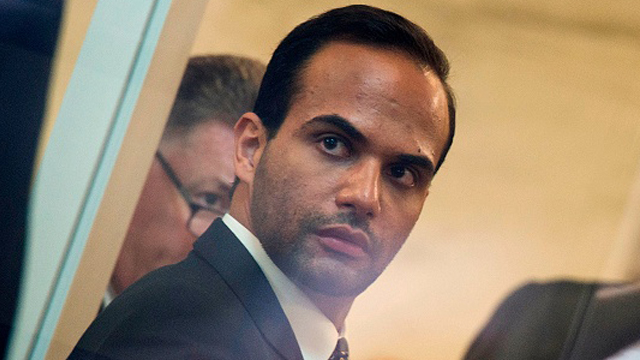 RUSH: You people are familiar now with the name George Papadopoulos because I have spent considerable time telling you who he is, and his role supposedly in triggering the Trump-Russia collusion investigation. That’s one of the first excuses the FBI gave. “Oh, well, it started when Papadopoulos told the Australian ambassador that the Russians had a bunch of Hillary Clinton emails.”

Well, we looked into that and found out Papadopoulos didn’t know diddly-squat, that he was told that by a professor from Malta by the name of Joseph Mifsud — who now, by the way, is missing. So you know the story where Papadopoulos was then called by another FBI spy, Stefan Halper, and invited to the United Kingdom to give a lecture on some stupid subject somewhere, get paid three grand plus airfare. Papadopoulos accepted; he went over. And that’s where they told him. Mifsud followed by Stefan Halper.

“Remember, George? Remember that story about the Russians have Hillary emails?”

And then he tells this Australian ambassador in a bar one night, and the Australian ambassador then reports to the FBI: “Hey, you got a guy in the Trump campaign here who says that the Russians have a bunch of Hillary emails.” Well, he didn’t know that ’til the FBI spy had told him! Anyway, Papadopoulos (chuckles) was sentenced to two weeks in prison last week for lying to the FBI. Not… Papadopoulos never met Trump! He had no idea what Trump’s foreign policy was. He was one of these early — and I don’t mean to be denigrating of Papadopoulos by any stretch. I’m just saying he was, you know, portrayed as “Trump foreign policy adviser!”

He wasn’t. Trump never got any advice from him. There was also a story that Papadopoulos had tried to arrange a meeting between Trump and Putin and that Trump supposedly nodded his interest in such a thing. Poor George Papadopoulos. He was just… He was set up from the get-go. Anyway, when the FBI, Mueller and the gang start talking to him he starts freaking out, gets a little nervous, tells them some things that aren’t true. Supposedly, he could have gotten six months, but the judge gave him two weeks. Anyway, he sat for an interview with Stephanopoulos and some others.

We have some audio sound bites of that coming up. But the key here is Mifsud. He’s from Malta. And all of the references to him it’s “the Maltese professor Joseph Mifsud.” Look, he’s part of the U.K., Cambridge, Oxford cabal. You know, there’s a direct link between higher education, the academy — Yale, Harvard — to the FBI and CIA. Oxford/Cambridge to MI5, MI6. That’s where a lot of spies are recruited by all these agencies. And they end up becoming professors at these places as covers for their actual spy activity.

Papadopoulos got ensnared starting with Mifsud, who was a buddy of Stefan Halper. But they can’t find Mifsud. They don’t know where he is anymore. Maybe dead. Some people think he’s dead. Suspiciously so. Anyway, it turned out that Papadopoulos was not the beginning of the investigation. That was one of the first things they threw up against the wall hoping we would believe it. Carter Page was not the beginning of the Trump investigation. This thing predates that. But what all of this, of course…

RUSH: Dirk in Indianapolis. I think we’ve got time to squeeze one more call. I’ve got about a minute and a half here but I wanted to get to you. How you doing?

CALLER: (garbled cell) I’m doing great. Help us, Rush, you’re our only hope. In Glenn Simpson’s Fusion GPS deposition that he gave to the Senate that Feinstein released, about halfway through it he says that someone may have already been killed over this dossier. At the time a lot of (unintelligible) thought it was Mifsud. I’m thinking there may be a connection there. Also (unintelligible) used to work for a CIA group which is called the Open Source Group. Google it; you’ll see that her and Bruce Ohr did a presentation at a panel that CIA group put on to journalists.

RUSH: Yeah. Well, Glenn Simpson (for those of you who may be having a mental block) is a former Wall Street Journal journalist, and he’s an accepted member of the swamp, and he founded this firm Fusion GPS. They’re the people that hired Christopher Steele to write the dossier, and they paid Steele via that law firm cutout.

Fusion GPS has been up to its armpits in trying to get rid of Trump. Now, Mifsud, I know he said that people have already died. I don’t know if they’re talking about Mifsud. I don’t think these guys would be… Mifsud is not supposed to be talked about by these guys. In fact, Cookie, I need the Papadopoulos bites tomorrow. There’s like nine of ’em here, I think — two pages’ worth of ’em. I didn’t have time to get to ’em today and I want to.