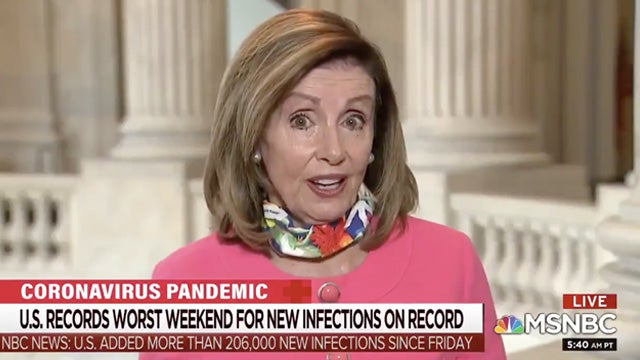 RUSH: I think, ladies and gentlemen, they’re beginning to count their chickens before they’ve hatched.

You ready for this? Nancy Pelosi warned President Trump to prepare to be “fumigated” out of the White House if he refuses to leave. Have you seen this? Nancy Pelosi “took a jab at Trump, who faces a tough reelection fight against presumptive Democratic nominee Joe Biden this fall, after he declined to commit to accepting the election results during an interview on Fox News Sunday.” Chris Wallace. 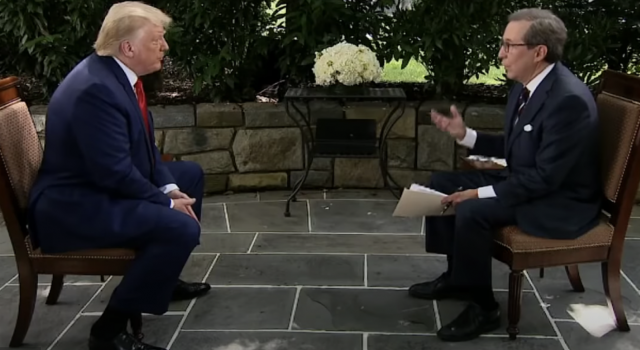 And then Hillary Clinton began to talk about how Trump is a threat to democracy and so forth. And Trump knew what they were doing. He was not just gonna say, “Yes, of course I’ll accept the results.” He’s not gonna tell anybody this two weeks before the election. That is a hypothetical, and he’s not gonna admit that he could lose. Because that would be the headline: “Trump admits he’s losing election. Trump concedes election to Hillary.” That would have been the headline if he’d answered that question.

So here comes Chris Wallace with another interview on Sunday asking the question again. And Trump said (paraphrasing), “Well, no, I’m not gonna tell you today that I’m gonna accept the election results. We’re still how many hundred days away from it. There’s no way I’m gonna tell you that now. We don’t know what’s gonna happen. We don’t have any idea.”

And so now the Democrats are so convinced that they’ve already beat Trump. Trump is already defeated. And they’ve convinced themselves he’s not gonna leave the White House. So Pelosi says they may have to fumigate it. This is Pelosi’s quote: “Whether he knows it or not yet, he will be leaving.”

This is this morning she said this on MSNBC. “‘Just because he might not want to move out of the White House doesn’t mean we won’t have an inauguration ceremony to inaugurate a duly elected president of the United States.’ Presidents do not have the legal authority to stay in office longer than their elected term, but some critics have speculated Trump may not leave.”

And, meanwhile, who is it that refuses to accept election results? The freaking Democrat Party, Hillary Clinton, to the point they still refuse to accept the election results of 2016 to this day. And they’re trying to lay this off on Trump? It’s the Democrats who can’t accept that they lost the election. And now they’re so convinced that they’ve already won that Pelosi is talking about having to fumigate the place to get rid of Trump. 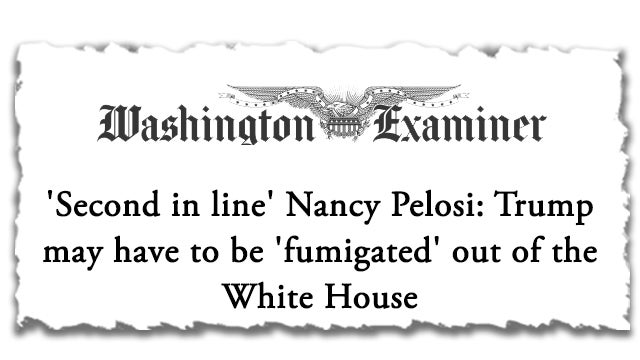 In golf, you never — you never — talk about how you finally figured the game out. You know why? Because the golf gods will come along and make sure that you have a lousy next couple of rounds. You just… There are certain things you don’t do, and this is one of them, and everybody knows it. And they just… They can’t contain themselves. They believe their polls.

And these… Folks, the polls right now don’t mean anything. And you know why that is? Largely because the events that are gonna shape the election haven’t happened yet. I know what some of you are saying. “But, Rush! But, Rush! The COVID-19 virus! Even you have said the election is going to hinge on it.” Yeah, but we don’t know what the disposition of it’s gonna be by the time people vote.

There’s also the question of the economy and how that’s gonna manifest itself, because we’re about to run out. You know, people are getting $600-a-week unemployment checks now which is mitigating the damage. The problem with that is that it’s enough money to be a disincentive to going back to work. And the question now is we need to re-up. So the Democrats, Pelosi wants a $3 trillion package.

That, by the way, is compassion: Having people go back to work, having the economy legitimately strengthen and improve not because the government’s giving people money, but rather because people are earning it and there’s productivity along with that. They’re doing work. They’ve gone back to their jobs, they’re producing things, the economy is on an upswing.

This is what the Republicans want, and do not tell me that it is a lack of compassion on the part of the Republicans. But that is how the Democrats are gonna portray this, and this is how it’s shaping up. The politics of this are, “Take the easy road. Give ’em the $3 trillion. Give everybody… Just continue with the 600 bucks a week and be done with it.”

The sensible thing (which is not the correct thing to do politically) is to pare it down. Require an incentive to work rather than providing incentives not to work. But the politics is gonna be very tough for the Republicans to hang on to their planned $1 trillion, which for anybody to come along and say that that’s not a lot? One trillion? That is so much money, we can’t comprehend it, ladies and gentlemen. 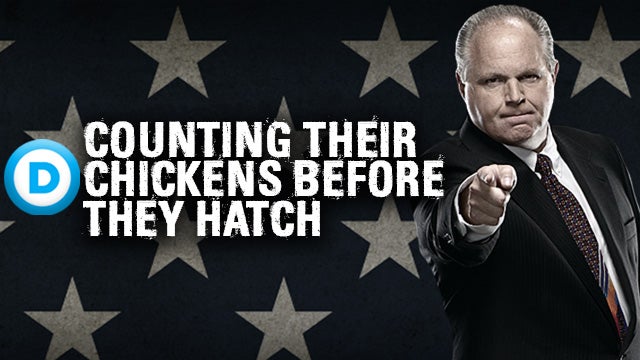 That’s so much money, we haven’t the slightest idea. We could not quantify it. You wouldn’t know how to describe it properly to convince people of how much it really is. Like you could stash a trillion $1 bills from here to the Moon three times, whatever it is. Even that. The Moon looks like it’s just a couple feet away when you go out there and look at it.

So even that, 240,000 miles? You can’t even comprehend the distance of the Moon from the earth. But we’ll get more into the reauthorization the COVID-19 package here as the program unfolds. I just think it’s quite telling that Pelosi’s out there already assuming Trump’s lost and that he’s not gonna leave and they’re gonna have to fumigate the White House to get him out of there.

They continue with this sordid belief that Twitter is America, and it isn’t. And how about this? “John Kasich, the Republican ex-governor of Ohio” who tried to turn his career around by becoming a “critic of President Donald Trump, is expected to speak at the Democratic National Convention next month in support of [Crazy] Joe Biden, according to the Associated Press.

“It’s a move that would be unthinkable just a few years ago, when, as governor, Kasich clashed with Democrats on a range of issues… [But now] Kasich is one of a number of high-profile [Never Trumpers] who intend to work against Trump’s re-election in the closing days of the campaign… Kasich’s 2016 campaign manager, John Weaver, co-founded the [Never Trumper] Lincoln Project… A Kasich spokesman declined comment Monday morning.”

So somebody want to tell me what this is gonna do for Kasich’s career?

Well, I don’t think he has a career now. I think that’s… (interruption) What is it with these guys? Thinking that…? Can Kasich not look at the support in the Republican Party Trump has and not figure out what the smart political thing to do is? I mean, at some point Trump’s gonna be gone. Whether Pelosi has to fumigate him or after he serves both terms or whatever, he’s gonna be gone.

And then you can get back to taking control of the Republican Party.

But Kasich is gonna jump ship — which, by the way, we don’t have any problem with, right? He may as well go and become a Democrat as far as we’re concerned. He has done that substantively — for all intents and purposes — anyway. So all these Republicans… Everything these people are doing is solidifying Trump’s support, and I think they’re sending a bunch of people to the Trump camp that they don’t possibly see or understand or would believe if it could be proven to them.