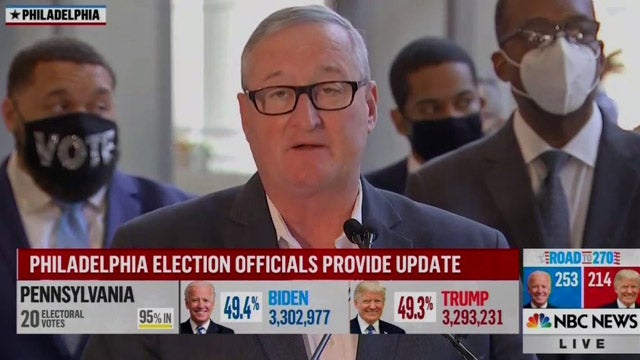 RUSH: Here’s the mayor, by the way, of Philadelphia. His name is Jim Kenney, and he just spoke mere moments ago.

KENNEY: While some including the president continue to spew baseless claims of fraud — claims for which his team has not produced one iota of evidence — what we have seen here in Philadelphia is democracy, pure and simple. Our Founding Fathers who conceived this system just a 15-minute walk down the street, I know, would be proud. Two-hundred-and-thirty-three years after the constitutional convention we stand at this convention center and proclaim, “The system still works, the people have spoken,” and God willing, we will have a peaceful transition to power — of power in January.

RUSH: I’m not trying to make you mad, folks, but that’s what the mayor of Philadelphia is saying. They’re in the process of stealing an election. They stand there and say that it would make the Founding Fathers proud.