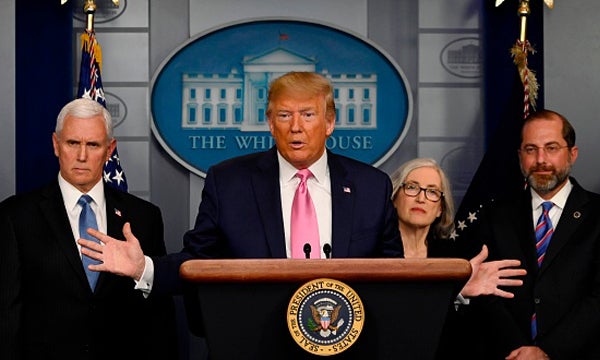 RUSH: This is Wednesday night at the press conference, and it is… Oh, yes. It was the NBC infobabe Hallie Jackson. She sits in the front row. The NBC people have the front row in these things. 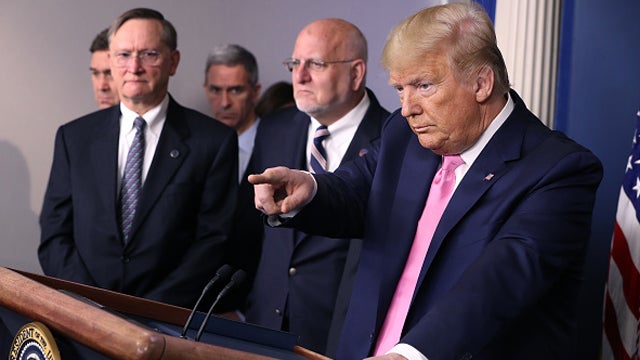 She just looked bored silly. You know what? She knows at that job, the next step is the Today Show. When they get tired of Savannah Guthrie, they will farm her out to the 9 or 10 o’clock hour and then they’ll move Hallie Jackson… (interruption) Well, that’s how NBC does it. That’s the career path. Go ahead and laugh at me all you want. Katie Couric? Look at it. That’s how talent happens. That’s how they lure all these women to go work for cable and other NBC outlets.

“You could be on the Today Show inside of ten years.”

So, anyway, she’s the White House correspondent and she’s looking bored as she can be because she hates Trump anyway. When it gets time to ask a question, “You know, Mr. President, you have contradicted everything every one of your medical experts behind you has been saying.” Trump let it go. He didn’t engage. He could have. But then she said, “In just the course of the last couple of minutes, you have disputed what the officials working in your [regime] behind you have said about the risk of coronavirus that spread. Do you trust your health officials to give you good information?”

THE PRESIDENT: I don’t think it’s inevitable. I think that we’re doing a really good job in terms of maintaining borders, in terms of letting people in, in terms of checking people. Also, that’s one of the reasons I’m here today getting the word out so people —

JACKSON: Do you trust them?

RUSH: This is what I wanted to try to explain. After the day of the State of the Union and the president finding a way to get Kathryn and I there — “Kathryn and me there,” properly stated. Even though I know Trump a long time and I’ve known him very well, that day told me as much if not more about him, than I had known in all the years previous. Just who he is. The kind of person he is. The kind of man, the kind of heart that he has.

One day I’m going to describe every detail of that day. I don’t have permission to do it now, and it would take close to an hour to go through everything, how that happened. But it was very revealing and eye-opening, and I think… When you think of the word “inevitable” what comes to your mind? Something bad, right? When something is inevitable, it’s like when Leo Durocher died, Howard Cosell said, “It was inevitable,” because everybody dies.

You just never think it will happen to you — which is, to me, evidence of the grace of God. Everybody dies. Everybody knows they are going to die. For most of your life you think it’s not going to happen and only happens to other people. Anyway, inevitably has always got a negative connotation to it. Now, Trump’s instinctive rejection of the media’s insistence that the spread of the virus is inevitable… I mean, the catastrophic, pandemic spread is inevitable.

He doesn’t agree. I find this fascinating. I think it’s interesting to study this and try to determine why, because here’s the man who has gotten more done in his life than most people ever will. He doesn’t have an attitude that things won’t happen when he’s involved in them. He thinks they will. You know the power of the mind. It’s incredible. It’s untapped. But you know as well as I do that having a positive mental attitude and can-do spirit is a large part of achievement. 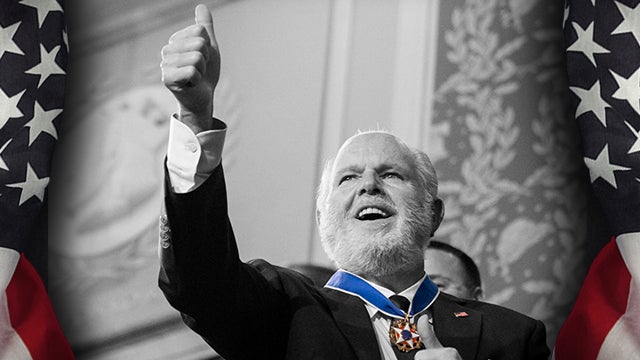 Thinking you can do it. Thinking that it will happen. It’s more than confidence, but that’s a big part of it. So here’s the media, Hallie Jackson, dumb questions about inevitably (impression), “The CDC says it’s this and everybody thinks it’s this and Dr. Fauci…” “I don’t think it’s inevitable,” Trump says. “Nothing is inevitable.” I don’t know how many people noticed it, but I did. It’s a huge insight into who he is, why he is legendarily successful and achieved.

RUSH: All right. “Inevitable.” When something is inevitable, you naturally think that it is bad. There is a fatalistic attachment or component when people use the word “inevitable.” Trump believes and proves that problems can be solved and fixed. It’s his whole life. He has had problems to solve in his businesses. He’s had problems to solve as president, and he’s done a bang-up job of it. The evidence is daily, and it’s right in front of our faces. Why isn’t that inspiring confidence?

It’s because people are being… Like Mick Mulvaney was at CPAC today and said, “Turn your TV off for 24 hours. Just turn it off.” He’s right. You’ll have a different attitude about a lot of things if you turn off the Drive-Bys for 24 hours. You know what else “inevitable” does? The whole concept of inevitability — inevitable — ignores human agency, human involvement. Humans don’t give up. Some do, but not everybody. A lot of humans attack problems and solve them.

God bless them. Thank God they do. Most of them are anonymous and we’ll never meet them, and they do what 99% of us would not do. They go down into the sewers. They join the military. They climb electricity poles. They build gigantic buildings on little cranes. I mean, they do things we wouldn’t do. They tackle problems and they solve them. Trump believes and proves that unleashed and unshackled free people make a positive difference in life.

They are down to the 270s, I think, or 240s. I forget which, but it doesn’t matter. They were down 4% to 7%, and started buying back their stock. That is a feature Apple has been doing for a number of years: Buying their own stock, particularly during plummets like this. They shore up the value of the stock for their investors. It’s a great move for investors. A lot of people ask, “Why is Apple buying back so many shares?” Because they are buying on the cheap! They are investing in themselves because they know it will bounce back as soon as this is over, and this is going to be over at some point. 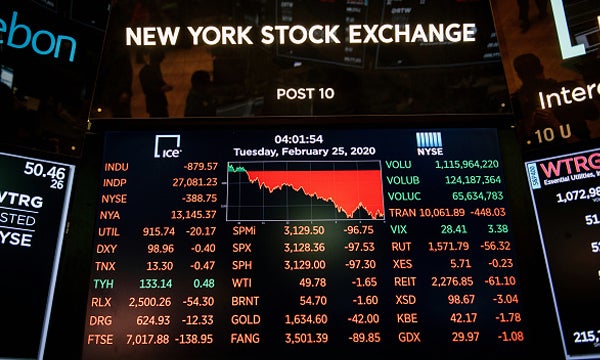 I’m just telling you: You’re going to be far better situated — mentally, physically, psychologically — if you have that attitude, rather than get caught up in the end-of-the-world scenarios that the media are presenting to you. Because I’m telling you, folks: Look at any story on the Democrat primaries, the Democrat debates. You will not see the coronavirus infecting any of it. If you want great examples of media bias, the Trump administration can’t function without the coronavirus about to destroy it and thus you.

But the Democrats, somehow, are totally unaffected by it. Why, it’s amazing! The point is: There is no doom and gloom in the reporting of what the Democrat are doing (chuckles), other than the fact that Crazy Bernie is leading everybody, which is doom and gloom in and of itself. But it’s going to end. Things end. Everything ends and changes. Directions change. Trump knows this. Trump is a doer. He is a problem solver. He doesn’t believe in the inevitability of apocalyptic things or even negative. That’s why, you know, people say, “Well, Trump, he was just trying PR. Of course he’s not going to admit the worst.”

No, no, he’s not doing that. He doesn’t believe this is the end of anything. It’s just another problem to be dealt with and solved for the benefit of America. As far as Trump’s concerned, he’s going to deal with this coronavirus in ways that most benefit America, the American people, the American economy.

Some people call it evolution. I call it adaptation. We invented air conditioning. That’s adapting to businesses being shut in the summertime, because they can’t go in the building because it’s too hot. There are any number of examples of this. We adapt to… We want to live in the ocean. Oh, by the way, turtle lights go off Sunday night. For all of you who live on the beach in Florida, you have to turn every damn light off starting Sunday night all the way through October 31st. I saw the warning.

I saw the threatening story in the Palm Beach “shiny sheet” today. They are not news stories. They are threats! At any rate, we adapt. You want to live on the beach in a place where there are hurricanes? Well, then you build your house or your building to withstand certain winds, and then you take the risk; you adapt. You have to adapt during things like this. The coronavirus, the flu virus, the swine flu, the pig flu, the shoe flu, whatever flu comes up, we adapt. It is not inevitable that we’re going to die.

He knows how tough it was. We’re a tough people! If you listen to the Drive-By Media, though, we’re just not capable. We’re just a bunch of helpless victims, incapable of avoiding horrible, rotten things — and it’s especially bad when we have Republicans in government because they are really bad and really incompetent. That is the sum total of it. The concept of inevitable/inevitability goes against who Trump is and what he believes to be true about the country. 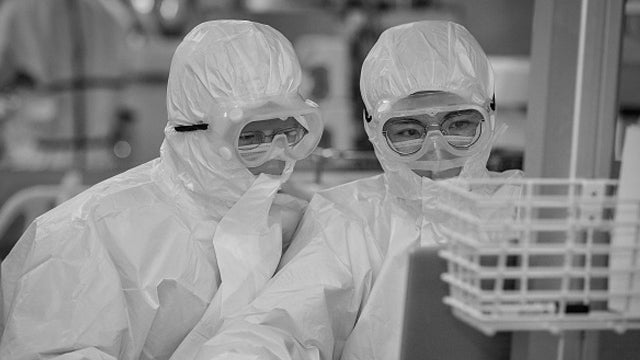 We wouldn’t want somebody like Hillary or Bernie Sanders or Elizabeth Warren or any of these people managing this thing because they would have already given up. They would have given up, and they would have told you to hunker down or do whatever. There’s no chance. To them, everything is inevitable, and it’s inevitably bad, because it is that framework and foundation from which they draw their power.