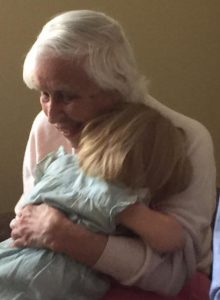 A celebration of life service for Reba Barnhart, West Plains, Missouri, will be held from 10:00 a.m. until 12:00 Noon, Saturday, June 16, 2018 in the Main Room at Robertson-Drago Funeral Home.

Mrs. Barnhart departed this life on January 20th after 92 years of a life well lived. Born and raised in Columbia, Missouri, she married Charles Barnhart on August 17, 1947 and shared a life with him until his passing in 2006. They moved the family to West Plains in 1960 for Mr. Barnhart’s job with the Department of Conservation, and she held down the house on Nichols Drive until their kids were old enough to take care of themselves. At that point Mrs. Barnhart wanted to put her college to use. She taught kindergarten in the West Plains school system from 1967 until her retirement in 1988; she loved the little children and thought she had the best job on earth. Mom never quit smiling, and in all the years I never heard her say a bad thing about anybody. She was a happy, loving, and caring wife, mother and teacher. She and dad felt lucky to find their place in West Plains. They loved the small town atmosphere and the people who lived there. They made many friends, and after retirement, she and dad were active in running and supporting the West Plains Track Club.

She is survived by her sons Mark, Craig, Paul and their families, ten grandchildren and 6 great-grandkids.

She was preceded in death by her husband, Charles and her son, Chris.

The family invites everyone to join with them in the celebration of her life, to share memories with them. The family also encourages anyone who wishes, to write a memory they might have of Reba on a card and leave it during the celebration.

A private burial will be in the Oak Lawn Cemetery. Memorial contributions may be made to West Plains Public Library or West Vue Nursing Center and may be left at Robertson-Drago Funeral Home.