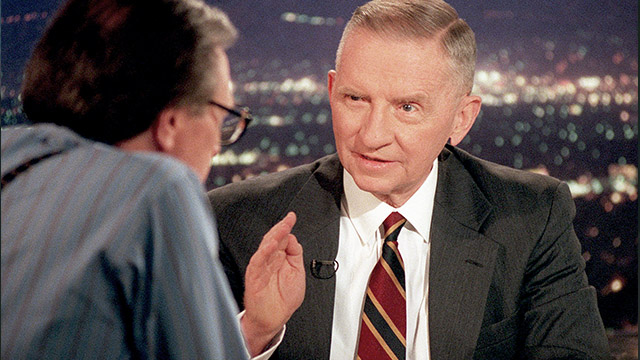 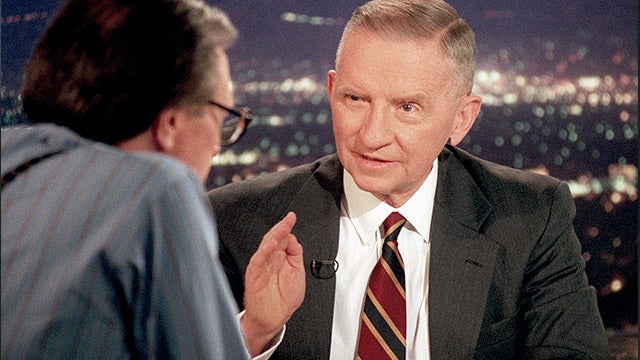 CALLER: Rush, thank you very much for taking my call. First-time caller. Can’t thank you enough for what you do every day. I’ve heard all these pundits. Not one person has mentioned Ross Perot. And I have no love lost for Ross Perot. But the guy got 19% of the vote in ’92 as an independent and gave us Hillary and Bill. That ticks me off.

Number two. The Desert Storm. Haven’t heard Norman Schwarzkopf’s name once. Norman Schwarzkopf was the four-star general that put his head down and got it done. And number 3. My dad spent 22 years in the CIA. He got booted out with Stansfield Turner in the early seventies. You might get the impression I don’t like George Bush. The CIA people loved that guy. I mean seriously loved him. And that was after the Church Committee and all that other crap that happened in the seventies, this guy stepped in, took it over. Thanks for the call.

RUSH: He did everything in government. Member of Congress, RNC, president of the United States, vice president. He was director of the Central Intelligence Agency. He was everywhere. No question about it. Well, you know, a lot of people, when you start throwing credit around, Gulf War I, yeah, it was Schwarzkopf who initiated the battle plan.

But it was Bush who trusted him. It was Bush who called him in the Oval Office and said this is what we gonna do. Schwarzkopf put the battle plan together, and it was eminently successful. It’s circumstances like that, presidents are always gonna get the credit or blame for things like this. And people in the military know it.

And, by the way, Schwarzkopf did not get slighted. Schwarzkopf became a very celebrated figure. He was on the speech circuit. He wrote books. He was highly respected. So he got his just rewards for a job well done. Now, on the Perot thing, this is a fascinating aspect of the 1992 campaign. Because Perot came out of no where. Perot was making speeches all over the country now. Remember, in1992, folks, there wasn’t cable news. There was just CNN. That’s all there was. And C-SPAN. 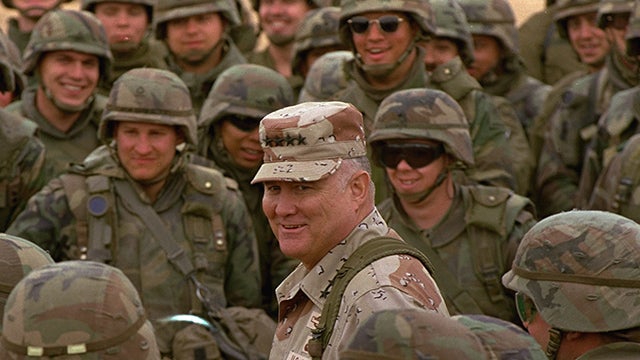 And Perot was making speeches all over the country that sounded a lot like Donald Trump in 2015 and 2016, except Perot’s subjects were primarily the economy. But Perot was also focused on trade deals, and he was the forerunner of the guy who thought NAFTA was a stinker. He called it “that giant sucking sound” that’s gonna take jobs away and so forth.

And he was captivating a significant portion of the Republican base in the campaign year 1992 on the basis of C-SPAN speeches. They were rocking and rolling and they were charismatic. And Perot, like Trump, had an ability to connect with audiences. And everybody was trying to figure out why.

Everybody knew who Perot was. He was a famous industrialist, a famous entrepreneurial businessman, very, very wealthy, loved and adored the U.S. military. And it appeared in the 1992 campaign that he had a personal animus for George H. W. Bush that had everybody scratching their heads and trying to figure out what was it. Because it was clear that as Perot’s campaign continued, it wasn’t gonna hurt Clinton.

Clinton, in fact, all the way up through June of 1992, the Bush campaign thought Clinton was a nonentity and a nonfactor, that Clinton was the least likely of the Democrats to get the nomination. So they were not really focused on Clinton, they didn’t think much about him. And they, interestingly, were ignoring Perot. I forget the other Democrats that were running against Clinton, but that’s who they were all focused on.

It was a gigantic series of misjudgments. But the biggest one was to not take Perot seriously. And the reason was that George H. W. Bush knew why Perot was doing what he was doing and told me during my overnight at the White House, after having gone to the Kennedy Center for a performance there, then back to his personal study at the White House before going to bed, it was fascinating.