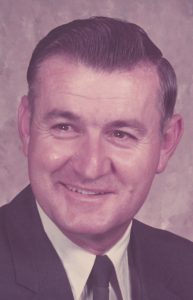 On April 12, 2018 Robert Eugene Bowers, 85, left his earthly body in Koshkonong and began eternity in heaven with the Lord Jesus Christ.

Gene, as his family and friends called him, was born September 27, 1932 in St. Louis, Missouri, to William Alvin Bowers and Mary Ellen Burns. He was the youngest of six, 1 brother and 4 sisters.

He and his first wife, Lorene, were married in 1951 and were blessed with a daughter Glenda Mae, and a son, William Robert. Bobby passed away when he was 2 years old, and Lorene in 1983.

On April 20, 1985, he was blessed to find love again and married Ivonne Hillhouse-Davis, in Kennett, Missouri.

He worked at McDonnel Douglas for 35 years, retiring in 1990. He was also a Pentecostal minister and loved to share the Word of God everywhere he went. He loved his faith and his family.

In 1994, he and his wife Ivonne, moved to Koshkonong, Missouri. He loved living in the country on a farm, tending to his land and animals, especially his horses.

He was preceded in death by his parents, his brother Harold and his sisters Bess, Effie, Goldie, Elsie, and baby Imogene, his first wife Lorene and their son Bobby, his son-in-law Mike, and his step son Jerry Wayne.

He is survived by his bride of nearly 33 years, Evelyn Ivonne Bowers, his daughter Glenda Braswell, his grandsons Michael and Jonathan Braswell and their wives, great grandsons Chase, Cole, Taylor and Ryder Braswell, sisters-in-law, brothers-in-law, nieces, nephews and their children and grandchildren.

Funeral services  will be held on Sunday, April 15, 2018 at 10:00 a.m. at Carter Funeral Home, West Plains, with Mike Braswell officiating.

Burial will be in Parkview Cemetery, Farmington, Missouri, under the direction of Carter Funeral Home, Inc.