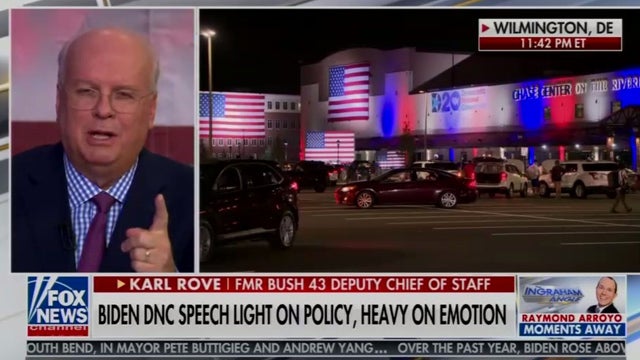 RUSH: One of the things that he did during the speech, he launched into a narrative on COVID that, again, it was narrative. Just literally made it up, and it was an attempt at indicting Trump, criticizing Trump on not doing enough, not caring enough. And last night on the Laura Ingraham show on Fox, Karl Rove just destroyed Biden on this narrative. It’s sound bite number 6. And here it comes in three, two, one.

ROVE: Late January, remember, he had said the China travel ban was hysteria and xenophobia. Early February he sent out his campaign to say this is less lethal than SARS, and is, quote, “probably not a serious epidemic.” Mid-February he said, quote, “We don’t have a COVID-19 epidemic. We have a fear epidemic.” By late February they were saying, quote, “It’s like flu and it’s gonna dissipate with warmer weather and move to the southern hemisphere.” And, quote, “Masks are not going to help,” end quotes. Early March he opposed the European travel ban. He’s also the guy that presided over in the Obama-Biden administration over depleting the national strategic stockpile of the PPE. His plan was delivered, all six things in it were things that President Trump and his administration had already done.

RUSH: Now, Karl Rove coming to Trump’s defense is a big deal, but he just decimates Biden there. Every bit of that is absolutely true, and everything Biden was accusing Trump of doing by not caring and making wrong moves and so forth were also just dead wrong, as dead wrong as Biden’s claims on what Trump said about the neo-Nazi skinheads and the white supremacists at Charlottesville.