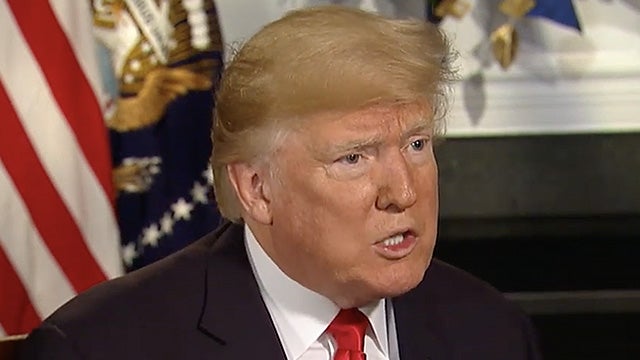 RUSH: President Trump granted an interview to Harris Faulkner at Fox News. They just played some. We have some sound bites, and I want you to hear. Here’s the question in the first bite: “What do you want the nation to know about your former attorney, Michael Cohen, being sentenced yesterday?”

THE PRESIDENT: Michael Cohen plead guilty to something that’s not even a crime.

THE PRESIDENT: Wait a minute. These are campaign… Nobody except for me would be looked at like this. Nobody. What about Congress where they have a slush fund and millions and millions of dollars is paid out each year? They have a slush fund. Millions! They don’t talk about campaign finance anything. Have you ever heard of a campaign finance list? Have they listed that on their campaign finance sheets? No. If it was, it’s not even a violation. No. 3, it’s a civil matter. You know, President Obama had a really big one — 10 times more money, much more money — and, you know what? He paid a fine. I’m the only one that this happens to.

RUSH: It’s actually true. This is show prep for the White House, ’cause this is exactly the point that I made yesterday in the program. The slush fund he’s talking about? It’s 268 financial settlements paid on behalf of United States congressmen who had been accused of sexual harassment or abuse by over 250 different women. Congress has a slush fund! They have a fund to pay these settlements — and it’s U.S. taxpayer dollars!

Nobody ever claims that there’s violations of campaign finance law involved here! Nobody ever claims that this is tampering with elections or unfairly benefiting an incumbent here by having the taxpayers pay off on a sexual harassment claim. Trump is right. They’re going after him for something that 268 times members of Congress have done, and that slush fund is $17 million so far. That’s what’s been made out: $17 million, 268 cases.

With Obama here, he’s talking about the $2 million, the $2 million campaign finance violation as determined by the Federal Election Commission. Obama illegally used $2 million. He was fined. He was not charged. He was not prosecuted. His “campaign” was fined, not even him. They didn’t even go after him. Next question from Harris Faulkner. “Michael Cohen said he lied in order to protect you. What’s your response to that?”

THE PRESIDENT: I never directed him to do anything incorrect or wrong, and he understands that. Look, he did some bad things unrelated to me. In order to embarrass me, they cut his term down. How many people when they say, “Listen, if you embarrass the president of the United States, we’ll give you a deal,” your father-in-law, your wife, “We’ll cut you a deal.” That’s all it is. It’s a terrible system we have. It’s going on right now with General Flynn. The nib said he didn’t lie but Mueller said he did lie.

So they took a man who’s a general and a respected person and a nice man — and I don’t even know what he said about me because, you know, maybe they scared him enough that he’ll make up a story, but I have a feeling that maybe he didn’t, he’s a tougher kind of a guy than Cohen. But they took a general that they said didn’t lie, and they convinced him he did lie, and he made some kind of a deal — and now they’re recommending no time. You know why? Because they’re embarrassed that they got caught.

RUSH: They’re recommending no time because no judge is ever gonna give a 30-year decorated military hero jail time over something they don’t even think he lied about. They’ve already ruined him. They’ve ruined him financially. That’s enough. They set Michael Flynn up. If you missed the first hour of the program, it’d be worth going back RushLimbaugh.com to do it. They set him up.

They conducted an interview of him in the White House when he didn’t even know that’s what was happening. They didn’t tell him he could have a lawyer. They didn’t tell him that he’d better not lie. They gave him no warnings whatsoever. He thought it was a casual conversation among friends, and he ends up being accused of committing a process crime. Next question from Harris Faulkner to the Trumpster: “What you do love about being president?”

RUSH: That’s the ultimate question. Trump says “my people.” He’s talking about his voters. They love the job he’s doing.