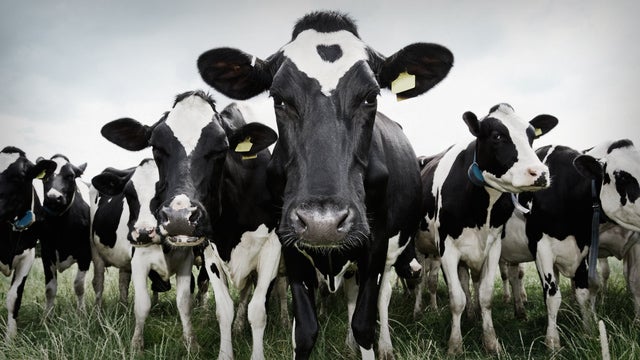 RUSH: Tom in Mitchell, South Dakota. Tom, it says here you’re in the livestock business. I’m glad you called. I’ve been eager to talk to somebody in your business. How you doing?

CALLER: Well, you know, we’re feeding cattle. I’m mostly a cattle broker. I broker the sale of cattle between the guys that raise them and the packinghouses. And we’ve got a lot of cattle getting big, and our problem is that we’re having trouble with the packinghouses being able to run strong enough, long enough to keep up with our show list —

RUSH: Why, is that because these packinghouses have discovered people with the virus working there and they’ve had to shut down?

CALLER: To some extent, yes, sir, especially in the hogs, you know, they’ve had to shut down in South Dakota —

CALLER: In the cattle packinghouses, Rush, a lot of problems are once they find out, or somebody finds out that there’s somebody else in there, maybe a coworker that had it, then people just aren’t showing up, but there have been other packinghouses —

RUSH: Ah. The employees fail to show up.

CALLER: Yes, sir. Yes, sir. The reason that I called you today is that in the midst of trying to find ways and thinking of ways to try to get this protein utilized, talking with people in the industry, with our animal industry board here in South Dakota, and one thing I do want to say is thanks to governor Noem of South Dakota, hydroxychloroquine, we’re on it.

But I’ll keep going from there. We’re talking with the animal industry board and with others in our industry. What’s going on now, Rush, is that we’re dumping milk, hogs are gonna be gassed or euthanized, and it sounds like in some instances they’re looking at the fact that they might just open the packinghouses just to euthanize the animals, nothing else, just to get ’em out of the way. And one thing that was brought up to me is that once these animals are gone, you understand it takes a certain amount of time to get an animal fat —

RUSH: Yeah. What is the solution?

CALLER: We’ve gotta get back to work and start creating that demand again for protein, whether it’s eggs, beef, or milk.

RUSH: Well, I know. But if you got employees that are afraid to show up because they’re gonna get sick, I mean, how do you overcome that?

CALLER: We’re working through that now. That was weeks ago —

CALLER: — in some instances —

RUSH: Okay, look. I need you to hang on through the break. I’ve got some other questions for you, and just two or three minutes. Have you got that time?

RUSH: All right. All right. Thank you much. We’ll be back here in a moment.

RUSH: Okay. We’re back to Tom in Mitchell, South Dakota. He’s in the livestock business. Tom, let me tell you what my fear is. The reason I’m glad you called and I want to talk to somebody like you is that the stories that are appearing in the media.

Numerous websites — New York, Washington, you know, everywhere outside South Dakota — are portraying what’s happening to the livestock business as fatal, that you may never recover from it. Now, the reason for this is this is what they want. You realize that much of what is happening in America today is a…?

You could call it a trial run for the implementation of pretty much everything in the climate change agenda, including the Green New Deal. They’re trying to wipe out oil. They’re showing what people not working and driving can mean to clean air.

RUSH: I’m just saying this has been the purpose. I’m saying they’re taking advantage of this and they’re trying to sell the agenda based on this. And the stories I’ve seen are painting a picture of total doom and gloom for the livestock business, and I wanted to ask you if that’s true or do you expect to come back and recover from this?

CALLER: We’re expecting… We’re looking every day as a better day. All of my guys are asking me, especially on the cattle side, “What do we need to do? Do we need to back off of feed?” You know, to slow down the finishing process. You know, “How can we slow down our costs or cut our costs?”

RUSH: — and that’s gonna limit the number of people that can buy your product. The price is gonna go up ’cause there’s gonna be less of it.

CALLER: Yes, sir, and what I was hoping and what I wanted to convey or at least share with you and your listeners, is the fact — this was explained to me yesterday by a very knowledgeable man — that in the industries, the hens are being put out now. They’re being taken to slaughter or whatever it is that they do with them, but they’re being taken out of production.

They’re not gonna return. They’re being utilized as protein if they can be, or they’re getting buried after being euthanized. Those were layers, and the hatchers — or the cracker machines — that would crack those eggs and put ’em in bags and send them to the restaurants. Those eggs weren’t being used, so the producers were having to deal with eggs that they couldn’t get rid of.

CALLER: They were going to marketplace where they could be in boxes but then they ran out of — or the cartons. They ran out of the cartons, and here’s another set of eggs that they can’t deal with. And so what they do is they do away with the factory, which was the hen. With the diary, on the cow side, the milk that was going to the restaurants was being put in those bags with those big rubber nipples on the bottom that go into those big (crosstalk) machines.

RUSH: In other words… Let me take over. What’s happening, folks, is there’s not a supply problem at all. They are having to throw away what would normally end up on the grocery store shelves because the processing plants are being shut down as it has been discovered that people who tested positive for the virus worked there.

And since it’s assumed you gonna die if you get the disease, nobody is showing up to work for now. It’s a crying shame that this stuff is all going to waste. You know, we hear about — these leftists are constantly berating us about — all the waste and all the plastic and all the food that gets thrown away on cruise ships. And that’s nothing compared to what is happening now simply ’cause they can’t get the stuff to market.

It takes awhile for a steer to get old enough to slaughter it for good beef, and the same thing with chickens and eggs and this kind of thing. So it’s not just gonna instantly rebound. This is the kind of damage being done to our economy that is so unnecessary, and it’s happening everywhere along the supply chain.

Now, some slaughterhouses are still up and running, and they’re being furnished with product, and they’re processing it and prepping it and they’re sending it to grocery stores around the country and to restaurants that are open. But the supply is down. That’s gonna cause the price to go up when people don’t have any money to pay for it anyway.

And this stuff just feeds on itself.

(sigh) I can’t get past the fact that we’ve done it to ourselves, under the guise that somehow we have prevented a lot of death, which is what I think the objective as far as the politics of it is, that a lot of great people are saving a lot of lives in this whole thing. And of course, there’s nothing wrong with that. What if that’s not really happening? Anyway, Tom, I appreciate the call. Thank you very much.