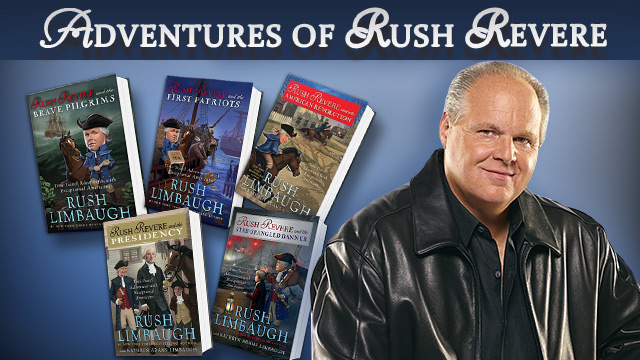 RUSH: Here’s Sean in Portland, Oregon, head back to the phones.  Great to have you Sean.  Hi.

CALLER:  Mr. Limbaugh, thank you so much for having me on today.  I first listened to you back in 1989 visiting a friend’s house whose mom would have you on in the background. I always asked, “What are you listening to?” and she told me.  Thanks for being that steady voice of clarity over the decades.

RUSH:  Just one correction: This program is never in the background.

CALLER:  We’re great.  Thank you.  The reason I’m calling is we have… Our oldest boy is 7, loves learning, and I’ve heard talk over the years about your Rush Revere series and wanted to get your opinion, sir. As he’s learning to read, he’s picking it up quickly and loves doing it.  Which title, sir, would be, like, the best or what you would recommend for a child starting out and getting evolved with that type of content?  We’re looking Christmas opportunities and gifts and wanted to see about which ones we could maybe pick up for him.

RUSH:  Are you asking of the Rush Revere books? 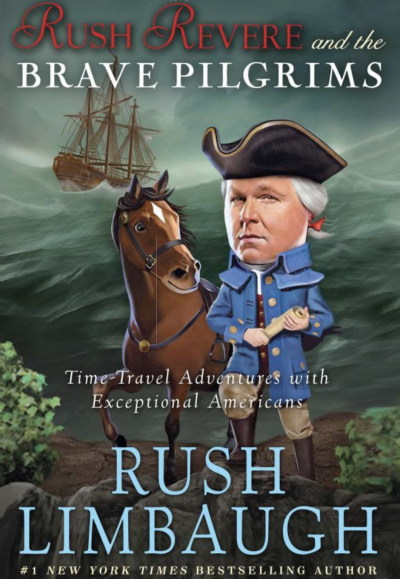 RUSH:  Oh, that would be the first one for a whole lot of reasons. But the first one is the first one in order, and it actually sets the table and stage, builds a foundation for what’s to follow.  Plus, it’s the story of the Pilgrims arriving.  Rush Revere and the Brave Pilgrims would be the one to start with because it’s the forerunner of everything else.  It tells the truth about the Pilgrims, who they were and their arrival and what they went through to survive and to ultimately prosper.  We went to great pains to… Your son is a boy, did you say? Your child is a boy?

RUSH:  Okay.  Well, we made pains to make sure that young girls reading this book would also find relevant characters in it that were girls.  Because there were.  There were a lot of women in the original story here that were highly, highly involved and relevant, including some of the children.  That hands down would be the one to start with.  In fact, do you have any of them yet, or not?

CALLER:  At this time, no.  We’ve considered even… I’m not sure if they’re in electronic form ’cause we like iPhone and i-devices as well that we are looking to maybe get those for.  But at this time, no, sir.  We’re looking to get involved with —

RUSH:  I tell you what.  I’ll send you the first one.  I’ll send you a copy of Rush Revere and the Brave Pilgrims, and we’ll send the CDs.  I did the audio version of the books.  Seven-years-old may be on the lower end of the age range here.  It’s 10 to 12.  But it’s never too soon to start, especially if your child loves reading and shows an aptitude for it.

It’s worth, I think, pushing it and promoting it — and there’s no better Rush Revere book than the very first.  So if you will hang on we’ll get an address and will send you a hard copy of the first one.  If you want to buy an e-book version, you know, check Amazon or iBooks.  But we’ll send you the hard copy and a CD for the audio version if you’ll hang on so we can get an address.