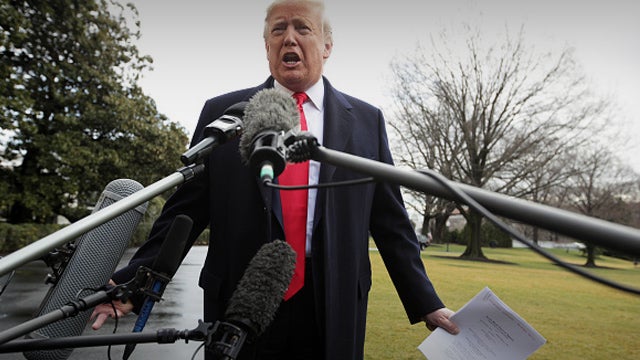 RUSH: Grab audio sound bite number 45. Shortly after 12 noon today, or maybe just before 12 noon, the president was leaving the White House on the way to helicopter, Marine One, to get on a flight down to North Carolina. He was holding something in his hand, and he walked up to the media. This is what he said…

THE PRESIDENT: So, I just got this. It was just handed to me. This is the D.C. Circuit, and we just we just won the big emoluments case. I think it was a unanimous decision. This was brought by Nancy Pelosi and her group. It just came out a few minutes ago. So, I’ll be reading it on the helicopter. But it was a total win. This was brought by 230 Democrats in Congress on emoluments. It was another phony case, and we won it three to nothing. We won it unanimously.

RUSH: I mean, it’s just another slam dunk. “A federal appeals court [three to nothing] dismissed a lawsuit by congressional Democrats alleging President Donald Trump violated the emoluments clause of the Constitution by refusing to allow lawmakers to review and approve his financial interests.” And, as CNN says here, “The ruling is a major triumph for the president, who’s intensely sought to keep his business affairs in private…

The approval numbers that Trump has after every attempt the Democrats have made… If I were them, I would seriously be looking at what they’ve done.

You’ve heard me say, “They’ve launched every weapon they know destroys Republicans. They’ve thrown everything at Trump that has gotten rid of any Republican they’ve wanted to take out for as long as I’ve been doing this, and not one of them — not one of them — has even come close.” They haven’t even gotten close is the point, despite what the media says. The media has been running Trump’s funeral for three years. He is triumphing over these people like nobody ever has, like no conservative ever has, like no Republican ever has.