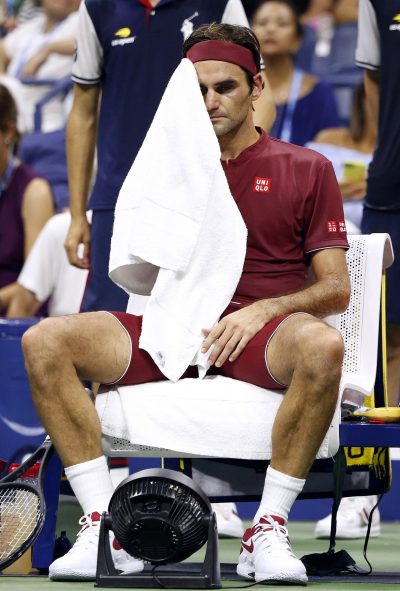 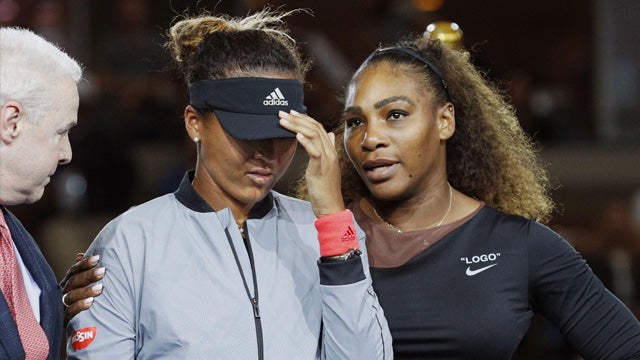 RUSH: So I have here a story from the Daily Telegraph in the U.K.: “Climate Horror Exposed as Swiss Millionaire Loses Evening at Tennis Game.” This is actually a story where the New York Times is being made fun of. 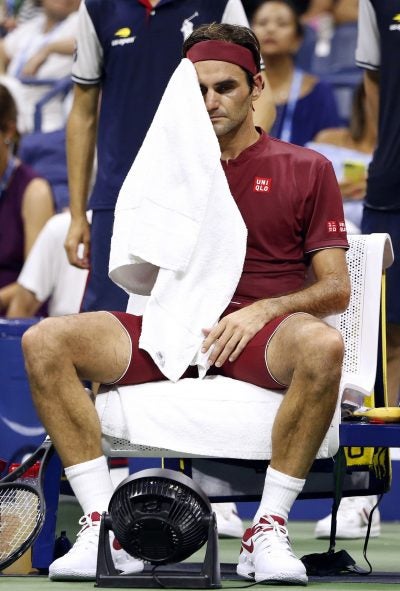 The Daily Telegraph: “According to the New York Times, Australia’s John Millman did not defeat Roger Federer at the U.S. Open. Instead, Federer was beaten by climate change: Federer, who is ranked No. 2, seemed to struggle all night in the heat and humidity at Arthur Ashe Stadium, losing in a fourth-round upset to John Millman, an Australian ranked 55th. ‘It was hot,’ Federer said. It ‘was just one of those nights where I guess I felt I couldn’t get air; there was no circulation at all …’

“To some, the comments by Federer, 37, may sound like sour grapes. But they also underscore a growing problem: increasing nighttime temperatures. Under climate change, overall temperatures are rising — 2018 is on track to be the fourth-warmest year on record — but the warming is not happening evenly.”

I’m not making this up! The New York Times actually blamed climate change for Federer’s defeat. See, Federer is part of the tennis elite. And the tennis elite is the same as the Washington/New York media corridor elite, the same as the Washington establishment elite. And these challengers are a bunch of upstart outsiders who are just there to provide opposition, much like the Washington Generals did versus the Harlem Globetrotters. And now their heroes are losing, and they can’t handle it.

Now, this business with Serena Williams, I’m not making this up. The comparisons between Serena Williams and Hillary Clinton and Naomi Osaka and Donald Trump are just stunning if you stop to think about it and if you know what happened.

And the tennis elite circling the wagons around her thinking the referee blew it. They had no problem booing the winner at the U.S. Open. They booed the winner! I’m telling you, folks, the comparisons are many. That U.S. Open women’s tennis final, a microcosm for how Trump is treated by the elites in Washington. Same thing. How all of us are treated, in fact. Expected to lose. Expected to be second or third class. Supposed to apologize for winning and then reject the victory and give it back, make allegations that our victory was tainted by cheating that benefited us.

A lot of people are saying, “Well, Rush, you’re missing the point on this. It’s ’cause of race.” It’s not race, because Naomi Osaka I think has got some Haitian, did somebody say? Haitian. Somebody said Haitian. So she is a woman of color as well. She is Japanese, Haitian. It’s not race, folks. This is elitism. This is pure “We’re better than you. We are in an upper class and you’re not.” That’s what this is.

Now, Serena Williams is one of the chosen beneficiaries of the elites’ affection because she does check off all the boxes. But they’re also legitimately impressed with her talent. But that’s not the primary thing. I just don’t think race is the primary, predominant factor here in what happened.

I think the expectation that she is chosen, she is the perennial representative of leaders and of winners and that this defeat of hers was a personal affront to the elites, not just to her. How dare that other girl win! They made that other girl feel like crap. When she was given the trophy, when she was awarded the trophy, she was in tears, and she did apologize.

She apologized for causing all of this that upset Serena Williams. And Serena Williams sat there and nodded as though that’s exactly how this young upstart ought to behave. I don’t doubt there’s a lot of sympathy for Serena Williams because of her race, but this is elitism, folks. It’s more about being an accepted insider and losing to some exciting new outsider that drove ’em nuts.

And then the president of the United States Tennis Association turned and addressed the crowd and said, “This mama,” meaning Serena Williams, “This mama is a role model and respected by all.” This role model had just embarrassed herself with numerous meltdowns, demanding apologies, accusing the referee of cheating her, not being fair and all this. It’s classic. There are no manners anywhere. There is not a single institution, it seems, that we can turn to and rely on for just common decency.

And I’ll tell you why. It’s because every damn thing in life that the left has touched has been politicized by its ideology, liberalism. How dare they! This young woman, this was her dream to play against the best and win, and she wanted the respect and admiration of Serena Williams. How many of you can relate to this in whatever you’ve chosen to do in your life? I sure can. I can relate to this in all kinds of ways, by the way. “Perhaps it’s not the finish we were looking for today, but, Serena, you are a champion of all champions. This mama is a role model and respected by all.”

They were sad! They didn’t get the result they wanted, and they let the winner know it! And she’s standing there crying, and she ends up apologizing for winning! Meanwhile, Serena Williams out there shouting, “I don’t cheat to win. I’d rather lose! You stole a point from me!” The winner, Osaka, Naomi Osaka, accepted her trophy while crying! She never smiled. When asked if it was true that it was her childhood dream to play against Serena Williams, she side-stepped the question, even though she had answered it previously.

And then the winner turns to Serena Williams, who’s made a spectacle of herself all afternoon, saying, “I’m really grateful I was able to play with you. Thank you.” She bowed her head, and Williams just stood there and nodded as though, “Yep, you damn well ought to be bowing your head to me.” I can’t believe that the United States Tennis Association actually participated and made that ceremony the way it was, but I’m telling you it’s a microcosm of what’s going on in Washington. It’s a microcosm for the way you who are blue-collar, middle class, upper middle class, middle America, the way you’re all looked at, the way Donald Trump is looked at. The signs are everywhere. 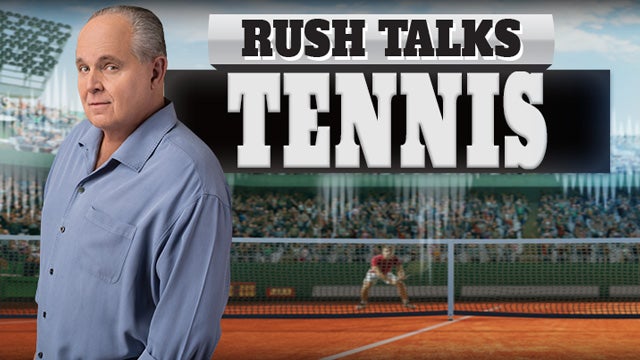 I don’t know how many people watched this thing. I didn’t! I didn’t watch this. I never watch this stuff. I’m telling you this because I heard about it and I went up and I got tapes and I watched replays of it. I was stunned. And then it hit me how overwhelmingly identical it is to the same elitist, arrogant, condescending attitude toward everybody else. And they can’t do a damn thing right running their own lives or running this country, and yet they have this arrogant belief that only they are qualified, that only they know what to do.

There was a Los Angeles Times column written by a guy named Michael Hiltzik two or three years ago. He said, “Donald Trump is out of his mind if he thinks the U.S. economy can exceed a 3% growth rate. He’s literally out of his mind.” What are we now, 4.2%? Barack Hussein Obama, who single-handedly set about trying to destroy it, is now out there trying to claim credit for what Donald Trump has done. And the same elites are applauding Obama, even though he spied on them. Even though he was disdainful of them.

RUSH: Before we get to the phones, let me share with you the Washington Post treatment of the shameful defeat of Serena Williams by this upstart, Naomi Osaka. Headline: “At U.S. Open, Power of Serena Williams and Naomi Osaka Is Overshadowed by an Umpire’s Power Play.” (Gasp!) Yes, the Electoral College reared itself and enforced the damn rules of the game on Serena Williams. How dare the referee! In fact, grab audio sound bite 23 and, I think, 24. Here’s Serena Williams. She’s the first athlete ever get in an argument with a referee. This was during the final itself.

WILLIAMS: I’m here fighting for women’s rights and for women’s equality and for all kinds of stuff. And for me to say “thief” and for him to take a game? Ugh. It made me feel like it was a sexist remark. I mean, like how…? He’s never took a game from a man ’cause they said “thief.” For me, it blows my mind. But I’m gonna continue to fight for women.

RUSH: Okay. So that was a press conference afterwards. “I’m here fighting for women’s rights and for women’s equality for…” You’re trying to win the U.S. Open, for crying out loud! What’s your name, Serena Kaepernick? Anyway… Yeah, let’s hear 24. This is Christine Brennan. She writes for USA Today (used to be the Washington Post) and she’s being interviewed by Poppy Harlow, the infobabe anchorette at CNN. And the question:

“Is it solely sexism, or is it more than that?” They’re all talk, the referee and how the referee jobbed Serena Williams. Look, she loses 6-2, 6-3. The referee didn’t have anything to do with it. She just got beat. But see, just like Hillary, she didn’t get beat. They cheated. The referee, the Russians, somebody cheated. Now the real winner is being ignored. No stories about her. Nothing. Anyway, here’s Christine Brennan.

BRENNAN: I think it is sexism. Serena is a very outspoken person. She is a champion for many. She is bigger than the game. So there are a lot of reasons why someone might, uhhh, target Serena or look at her differently. Clearly, she’s an African-American woman. Uhh, but we are seeing — as you’ve alluded to — over and over again now in the last, what, 36 hours since this happened. Uh, men in tennis, women in tennis, the greatest names in the sport, all of them coming down on the side of Serena being correct about a double standard.

RUSH: Of course they are! They’re all part…? Of course they are. Serena Williams didn’t lose, you see? She got jobbed. Forget that she lost in straight sets and was never in it. The referee did it because the referee is anti-female. The referee is probably another tennis elitist who’s probably shocked at the way he’s been turned on by people he thought had welcomed him into the elitist club. This referee’s gotta have his mind blown. USTA turns on him, Serena turns on him, now the whole tennis community.

RUSH: Okay. Last word on this. Serena Williams: “I am here fighting for women’s rights and for women’s equality for all kinds of stuff.” Well, a woman won, and the same referee refereed her play as refereed Serena Williams. Where is this oppression of women? It was an all-women’s match with the same referee, and a woman won — a minority woman to boot. So what women’s rights were violated here?