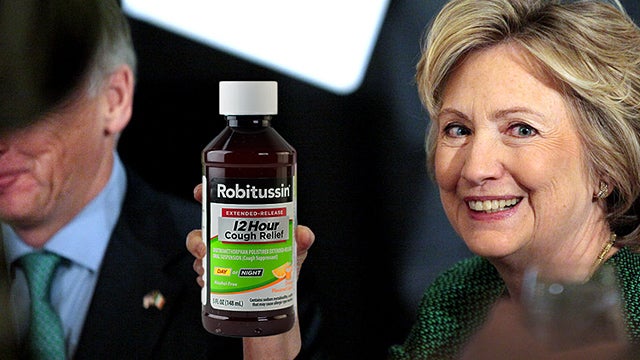 RUSH: Okay. Let’s take this seriously. Who is more likely to win the Democrat nomination for president, Michael Avenatti or Hillary Clinton? Let’s do an A-B, side-by-side comparison, shall we? Yes, it is. Hillary Clinton’s cough is a major negative. It was so bad — by the way, the Clintons drew — I forgot the numbers — about 3,500 people in a 14,000-seat arena that they had to keep cordening off and cordening off and roping off and curtaining off to make it look like it was full. Nobody showed. This was in Canada, in Toronto, Canada. Nobody showed up. She had a coughing spasm in the middle of it.

Avenatti has been evicted from his Orange County law offices for failure to pay rent. So who gets the nod there? I mentioned nobody showing up to see Bill and Hillary on their magical mystery tour, but Avenatti, he can’t get booked on cable TV shows anymore. I guess the magic of being a Trump killer somehow has evaded him.

Speaking of the Clintons, Maureen Dowd had a column in the New York Times on Sunday where she now admits to just feeling sorry for ’em. This tour and Hillary’s coughing and the refusal to give up the quest just make them pitiful figures. She feels sorry for them. She’s calling it curtains for the Clintons. Now, who could have possibly predicted that there would be no demand to see Clintons? I think that’s right. I think I did.

Who could have predicted the claims that Hillary would run again were anything more than desperate attempts to sell tickets to a show that no one wants to see? I think that was one of my predictions, too, that the whole purpose of this silly tour is twofold: To show that they can draw crowd too. They’re jealous of Trump like you can’t believe, not just the Clintons; the whole Democrat Party.

They’re jealous of Trump rallies, even though they make them and make fun of them, but they’re jealous of ’em. The Clintons wanted to do one to show that they could draw, and they can’t. You know what I think? I think Hillary’s best shot at profiting from her latest celebrity — and that’s what the Clintons are all about, is profit. Do not doubt me. The Clintons have been all about money ever since Whitewater going back to when they were both in Arkansas. All of their friends and donors, understand, mega wealthy, filthy rich. The Clintons didn’t have anything, and they wanted to be in that crowd. They wanted to have money. So they stole stuff from the White House on their way out claiming they were broke. They stole silverware. They stole place settings. They seal sheets and stuff out of the White House when they left in 2000, claiming that they were broke.

So I think what Hillary ought to do is call Robitussin and volunteer to be spokeswoman. Now, hear me out. She has to be rebranded. And it all begins with embracing her trademark cough. Everybody is painfully aware of this, the Arkansas broadbeam. It may have cost her the presidency, that and not being able to get in a van. And you know somebody would pay her to do it. People are rushing to give the Obamas and the Clintons money left and right.

Nate Silver, our old buddy Nate Silver, he had an answer to Maureen Dowd’s column. He said Dowd has such a blind spot about the Clintons that she misses the rather office reason why they behave like they do. It’s because they feel like they’ve been treated unfairly, especially by the media, especially, especially the New York Times. Nate Silver thinks the reason Clintons are out there doing what they’re doing is because they’ve been mistreated by the media. Can you imagine that?

The Clintons have been treated with kisses and kid gloves from the very beginning. They have been idolized, they have been applauded. Women in the media have promised to give Bill Clinton any number of Lewinskys just for keeping abortion legal. The Clintons’ complaints about media unfairness are just laughable. I maintain the Democrats don’t know what negative media coverage is. They haven’t the slightest idea.

There is not a single Democrat out there, much less Republican. In fact, there aren’t very many people, period, anywhere who could put up with for a week what Donald Trump gets in a day. And Clinton sure as hell couldn’t. You know who else couldn’t? Barack Obama couldn’t handle this. He thinks what happened to him on this program was tough. He’s still running around complaining about me and this program and Fox News.

These people don’t know what media criticism is. Nobody on the left does. That’s one of the reasons why Trump snuck up. They believed their polls. They believed Hillary was gonna win in a landslide.

I’ll tell you how bad it is. Dick’s Sporting Goods. You know the Dick’s Sporting Goods store? They thought that they were gonna really, really change course and become relevant. They announced that they were gonna stop selling anything to do with guns, including guns. You remember that? How long ago was that? Just a year? That might have been. That might have been after the shooting down in Florida, the Marjory Stoneman Douglas school shooting.

Now the bottom has fallen out. And they’re warning investors it was a big mistake. The left does not know what bad media coverage is. The left doesn’t know what it’s like when the referees are against them. They haven’t the slightest idea, and I doubt they could put up with it for very long at all. And I’m sure none of them, none of them could survive a week with the treatment that Trump gets.