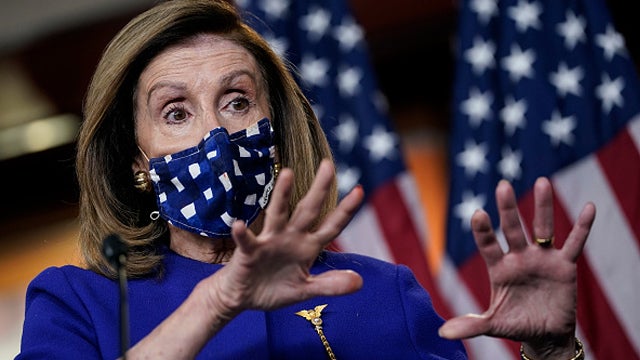 RUSH: Grab sound bite number 22. This is the weekly press conference of Nancy Pelosi, and an unidentified female reporter asked her about the Biden corruption scandal, the bombshell releases and reports of the associates of Hunter Biden now admitting that it was Joe Biden who put together all of these financial deals.

PELOSI: (crosstalk) Excuse me, do you have question?

RUSH: “Not talking about it. Not talking about it.” She snaps at a reporter, refuses to answer any Hunter Biden question. Now, grab audio sound bite number 1. This could be… I don’t know yet, but this could be evidence of growing concern. I wouldn’t call it a defection from Biden, although I have friends of mine who think it is. 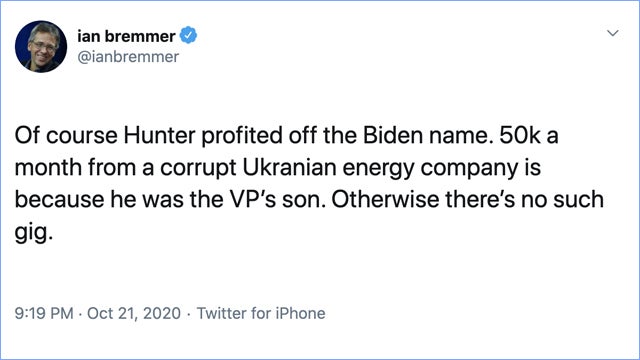 Why admit that? “Well, because it’s out there now, Rush. That’s what these stories mean.” Yeah, but, the editor of TIME magazine admitting it? And, by the way, it’s not the first time. Let’s go back, September 24, 2019, CNN New Day. Ian Bremmer had this to say about Joe Biden and his son Hunter’s business dealings in Ukraine.

BREMMER: Biden does have a problem here, by the way. I mean, I have to say, $50,000 a month for Hunter Biden clearly, uh, to be selling influence, ’cause otherwise no one would ever pay him that kind of money for a company that, frankly, was pretty corrupt and has been — uh, before and has been since — under investigation.

CAMEROTA: And is that Biden’s fault or problem?

BREMMER: No, but it’s hard to imagine Joe Biden wasn’t aware of it, and I think that I expect that President Obama — if he had known about the reality of this situation — would have probably told Biden, “Get rid of this. Like, we shouldn’t have your son working in this situation.” That would have cost him.

RUSH: All right. So, now, when was this? This was September 24, 2019. This is back during the Democrat primary campaign era. They’ve known all of this about Biden for all of this time — and back in 2019, they thought Biden was a dead loser. He wasn’t gonna win anything. So they’re freely talking about this as though it is a known factor.

Jump forward to now in the campaign and he’s the nominee. So of course they’re running around acting like they never heard of any of this and it’s all news to them, and there’s no reason to talk about it. Except Ian Bremmer, the TIME magazine editor, tweeted it again last night, after the New York Post stories came out documenting all we have suspected.

“Of course Hunter profited off the Biden name. 50k a month from a corrupt Ukranian (sic) energy company is because he was the VP’s son. Otherwise there’s no such gig.” So somebody clearly is building a pathway to run away from this should it be necessary.