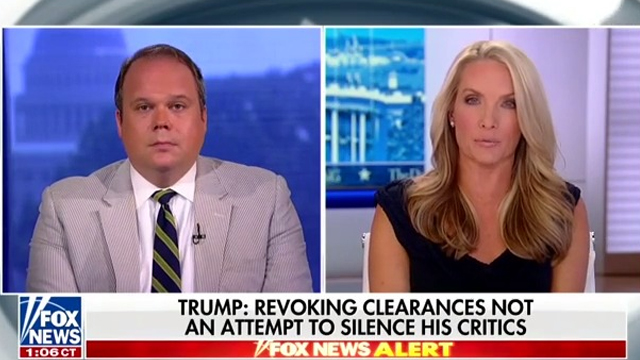 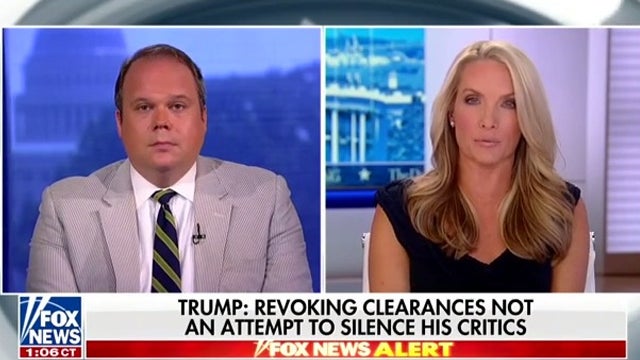 RUSH: Folks, I have a got some sound bites I want to get into here that I have kept intending to do but they just got pushed aside as the program evolved before our very eyes and ears. Something actually just happened mere moments ago. This was on the Fox News Channel, the daily briefing with Dana Perino.

She was speaking with their political editor there, Chris Stirewalt. And she said, “President Trump is apparently –” you know what? Hang on a minute. Cookie went out got the Mooch, Scaramucci. ‘Cause I heard him on Fox about an hour ago expressing his disagreement with Trump on canceling the clearance for Brennan. And I reacted to that. So we’ll hear the bite.

But Stirewalt — remember, folks, over the years we’ve always talked about how, when you end up being really ripped and criticized, there’s two ways to deal with it. You either ignore it or you react to it. If you react to it, some people are gonna say, “You can’t react to it. You’re just elevating the critics. You’re letting the critics know that they bother you, and that’s what they love, and so they’re gonna just ramp it up.” And there’s no guaranteed, hard, fast way to react or respond to criticism.

There’s not a single expert that can tell you how to do it. But the conventional wisdom is that you don’t do it, that you don’t elevate your critics. I think this is another area where people totally misunderstand Trump. I think Trump wants critics. Critics to Trump are foils. Critics are the equivalent of me getting phone calls from liberals. I don’t get nearly enough of ’em. I love ’em, but they don’t call here ’cause I know they don’t have a chance.

These people think Trump doesn’t like criticism. They still have no idea who he is. Anyway, here’s Stirewalt. And again the question: “President Trump is apparently elevating John Brennan so that he became the number one foil in his work to try to convince people that it’s just a rigged witch hunt.”

STIREWALT: Right. We remember when Barack Obama elevated Rush Limbaugh and said he’s the leader of the Republican Party. Politicians like to pick their enemies. They like to put forward the faces that they want America to see as their enemy. That’s why the president talks Maxine Waters, who has no clout particularly in the Democratic caucus, but she says outlandish things so he wants to elevate her because it inspires his base to new levels of outrage.

RUSH: Now, I get the point here. He thinks that Obama made a mistake in calling me — The biggest time that I’m aware of that Obama called me out was two weeks after he won, he had a meeting with the congressional leadership in the White House. And he said to the Republican leaders in the House and the Senate (paraphrasing), “By the way, you guys have got to stop listening to Rush Limbaugh. It’s just not how things work in this town. You’ve just gotta stop doing that.” And two weeks later I had a meeting with John Boehner who was the Speaker at the time, and Boehner said to me, “I can’t understand why he would do that. Why bring you up?”

I said, “Mr. Speaker, if I may, what he was hoping was that one of you would stroll to the microphones outside the White House and agree with him. He wanted to drive a wedge. He was hoping that somebody in the Republican Party leadership would go out there and agree with him and say that outside forces like Rush Limbaugh have been a problem, and we in Washington need to stop paying attention.” That’s what he wanted.

But Obama didn’t elevate me; I was already who I was before Obama came along. I live rent free in Obama’s head. The same thing with Bill Clinton. But still, see, the argument is you can’t elevate, should not do it. Here’s Scaramucci. Listen to him. He’s talking here with Harris Faulkner. “The president today calling out Bruce Ohr and his wife, saying their clearance might be next to go. You surprised to see this? What do you think?”

SCARAMUCCI: I’m not surprised. I understand why the president’s so upset. I understand why he believes all these allegations are false, and I do believe that he gets exonerated by the Mueller report. He’ll be totally exonerated. But he’s upset. When he gets riled up like that he’s starting to take action, and he’s starting to take action which you just have to ask yourself, is it too partisan because we’ve had 75 years since the end of the Second World War where we’ve been a bipartisan team committed on national security. And so what I worry about is if a fight starts like this and there’s a Democratic president in eight years, let’s say, then they start doing the same thing. I just want to be careful here that we’re not going overboard because I do think the president is gonna be exonerated.

RUSH: He thinks that Trump doesn’t need to do any of this, because it doesn’t matter because Trump’s gonna be exonerated. There’s nothing to be exonerated from! The charges are bogus! The charges should be leveled at the Democrats and Hillary, at the FBI, at Comey, at the elements of the Department of Justice and Hillary and Obama that were in on this! And even Mueller! Trump shouldn’t be charged with anything. This is so bogus. It’s 180 degrees out of phase.