RUSH: Dare we move on to more insanity? San Francisco Mayor London Breed announced on Twitter last night that she gonna look to redirect money from the police department to the African-American community in the next budget. You know, Barack Obama declared war on the suburbs when he was president. Tried to make people feel guilty for moving and living in the suburbs.

So here we are years later, after radical Democrat-affiliated organizations laid waste to the cities, the suburbs are winning and people are moving there, so now they’ve declared war on the cities again. Defunding the police is the plan. Not just in San Francisco. “Brian Fallon, former spokesman for Attorney General Eric Holder, called for cutting off funds for police departments in the wake of George Floyd’s death.”

Brian Fallon, former spokesman for Holder, part of the Obama Regime. Former spokesman for the Hillary Clinton campaign. Tweeted defund the police, the mainstream media city council president Jeremiah Ellison, the son of Keith Ellison, claims they’re gonna dismantle the police, not just defund them. Los Angeles, the same. Minneapolis Parks and Recreation board follows the school board in ending its relationship with the police department. I’m not kidding. It’s not just defunding. The Minneapolis city council is seriously considering disbanding the police.

New York City’s comptroller, Scott Stringer, sent a letter yesterday to the city’s mayor, Bill de Blasio asking him to cut $1.1 billion of funding to the New York Police Department. Folks, the Democrat Party, an abject failure, its failures on full display, is now declaring war on America’s police, first responders, in an election year. Could somebody explain to me seriously — Mr. Snerdley, can you explain, how in the world does this help Joe Biden get elected? How in the world? 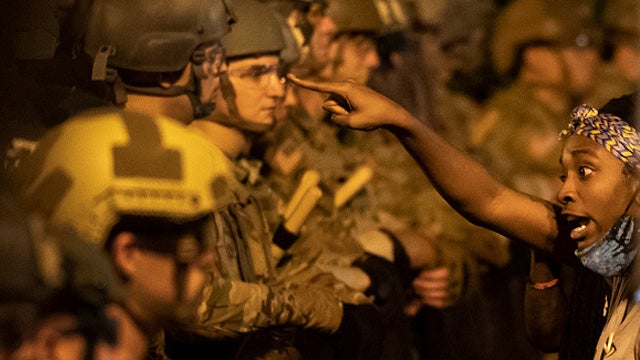 They think they got Donald Trump on the ropes. They think that they’re making headway against Trump because of generals and all these people distancing themselves and writing that Trump is a threat to the Constitution, all this stuff, and Trump went over to the church holding a Bible and people don’t like that. How in the world does publicly, loudly promising to defund and to, in some places, dismantle the police, how in the world do people doing this think that it’s going to help the Biden campaign or Democrats in general?

How do you walk back this? How do you walk this back when you get all kinds of people revved up for it? I’m telling you, the people that vote for these lunatics are buying this. They’re celebrating it. People in LA, Minneapolis, New York, they’re running around celebrating — some of them are. Most of the people that live in these places are scared to death. But there are some liberal Democrat voters that think this is the greatest thing they’ve ever heard. And they believe it.

What are the Democrats gonna do when the time comes they have to walk this back and say, “Hey, you know what? We can’t do it. We were a little premature”? Or are they gonna walk it back, or are they gonna own this? Are they gonna hang onto this and own this throughout the campaign? Well, I have my own thoughts on what this really is and what they’re doing, but if I tell everybody what I think, there’s nothing left for anybody else to say out there.