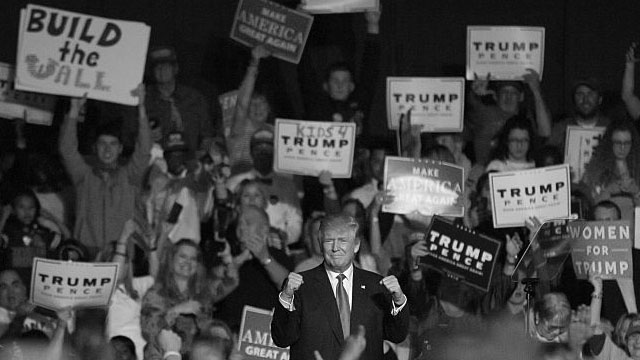 RUSH: We go to Athens, New York. Pat, welcome. Great to have you.

CALLER: I’m a big fan. I’ve been listening to you since you were on TV. And I think I might have a theory about why the deep state is so nervous about President Trump. I think they saw the thousands and thousands of people at his rallies and how they were chanting to lock Hillary up and also his promise to drain the swamp. And I think maybe that just made their hair stand up.

They start out hating Donald Trump because he has the audacity to challenge them. But then when people love the guy, well, that just infuriates, just infuriates. These people don’t spend a moment of their day appealing to the American people. Something you have to realize here, folks, and this is the great danger posed by the deep state.

So they see all of that, and it just confirms for them that this country can’t be left to the American people to decide who leads it. That’s what they see with the rallies. I’m convinced that the reaction they have to Trump is personal and visceral, sheer, raw hatred. And not for anything specific. Just because Trump is Trump and just because he’s confident and just because he’ll call ’em out and just because he’s gregarious and enjoying the hell out of what he’s doing and bringing people along with him.

Somebody like that will constitute a threat. Remember, these people that I’m talking about in the deep state, and they are intelligence people, staff people, the State Department, and they’re not all in intelligence. Don’t misunderstand. But these are people that live and work in offices you don’t even know exist. And they really do think that the voting public ought to have no input whatsoever in what they do or who should be doing it.

And so they look at Trump and they realize that he is not somebody they can dominate when he’s in office. They’re not gonna be able to intimidate him. And on the campaign trail, he’s promising to blow up and undo much of what their lives have been devoted to.

But the thing to take away from this is that they’re not worried when they see you out there supporting Trump, and they’re not concerned when they hear you shout “lock her up.” They are livid. Who the hell do you think you are, is what they say. And their instinct is gonna be to do anything to make sure you people have no say in what’s going on. Well, that meant, among other things, get rid of Trump. But that would happen even before you get involved in it by attending a rally or showing your support.

It’s pure, unadulterated, visceral hate. And they’re admitting it now, folks. The Never Trumpers on our side, same thing. They can’t stand the way he talks. Everything that comes out of his mouth has disqualified him since he got elected. “Everything, every tweet, everything he says offends us!” We’re dealing with the biggest bunch of arrogant, effete snobs you can imagine!

Here’s Bob in Chicago. Bob, I’m glad you waited. Welcome to the program.

CALLER: You’re an awesome guy. Thank you and keep pushing back against the false narrative and all this Russian stuff that’s really — it’s old, actually. I turn the channels on the news. You know, they all say the same stuff. I’d like to know, I was standing in line on Election Day, I was in an Italian area, there’s two older Italian men, I heard ’em whispering, “I wonder how he’s gonna vote.” I turn around, I go, “Are you talking to me?”

RUSH: The point that you’re making is that Trump has a lot of crossover voters from areas that people would not think would support him?

CALLER: Exactly. They don’t know what’s really going on. Every day when I get home from work and I sit with my family, the news is; so what are they saying negative about Trump today? I go, who cares? It’s all the same thing. They just want to get rid of him because they don’t like him.

Their only objective is to disqualify the outcome, to make sure that Trump’s victory doesn’t end up meaning anything, meaning he doesn’t get to implement much of his agenda. And they’re failing at a lot of it! And that explains why their anger is continuing to ratchet up. They can’t stop the guy! They can’t get rid of the guy! In their minds, they’re a zillion times smarter, they’re a zillion times more sophisticated.

They’re supposed to be able to shape public opinion, and they fail, and they fail, and they can’t succeed whatsoever when it comes to stopping Trump. So if they were really as smart as they are, they would be doing everything they can to find out who you are, to learn how to beat you. But they’re not. They’re so obstinate and they are so stubborn that that doesn’t interest them. In effect, you don’t exist.