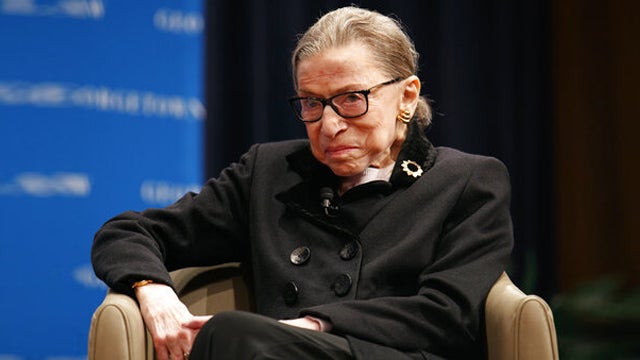 RUSH: Ruth Bader Ginsburg has issued a statement. She was in the hospital earlier this week. They said it was an infection. Wrong. She has now announced liver cancer. She issued a statement. “On May 19th I began a course of chemotherapy –” and then she mentions the particular drug, gemcitabine “– to treat a recurrence of cancer. A periodic scan in February followed by a biopsy revealed lesions on my liver. My recent hospitalizations to remove gall stones and treat an infection were unrelated to this recurrence.

“Immunotherapy first essayed proved unsuccessful.” Immunotherapy is, by the way, the rave right now in certain kinds of cancer. You know what immunotherapy does? If you can imagine — and I read a part of a book, my friend Professor Hazlett sent it to me, is fascinated by it — the team of people led by one doctor that invented or created the concept of immunotherapy, which the popular drug name is Keytruda.

Do you know what it does? It rewrites the body’s software. If you can imagine, it’s a massive innovation. And I understand what that means, but I would have a heck of a time explaining it. But immunotherapy ramps up your immune system to attack specific things, like cancer cells, and leave everything else alone. Chemotherapy for the most part kills everything — good cells, bad cells — and you live with getting sick as it kills good stuff because it’s also killing — if it’s working — the cancer cells as well.

Immunotherapy leaves the healthy stuff alone. There are some side effects that can happen with immunotherapy with Keytruda, but it is really innovative, such a huge advance. Rewriting the body’s software. Now, it’s a tricky thing. The director of Memorial Sloan Kettering, the cancer center at the hospital in New York, said immunotherapy is what is allowing us to use the word “cure” with certain kinds of cancers. But it doesn’t work for everybody. It’s dependent on a lot of things. And it did not work for Ruth Bader Ginsburg.

So she had to go back to the chemotherapy route, and she writes that it’s yielding positive results. She says, “Satisfied that my treatment course is now clear, I am providing this information. My most recent scan on July 7 indicated significant reduction of the liver lesions and no new disease. I am tolerating chemotherapy well and am encouraged by the success of my current treatment. I will continue bi-weekly chemotherapy to keep my cancer at bay, and am able to maintain an active daily routine. Throughout, I have kept up with opinion writing and all other Court work.”

So that’s Ruth Bader Ginsburg announcing the discovery of lesions on her liver. Chemotherapy seems to have it at bay. Now, her history with this is big. I mean, she was first diagnosed with colon cancer in 1999. She’s 87, and she’s tiny. But she must be some kind of tough. She had colon cancer in 1999. Ten years later she was treated for pancreatic cancer. You don’t want that diagnosis, but she got it. Then nine years later, after surviving pancreatic, she was diagnosed with lung cancer.

Two years later, January 2020, they told her she was cancer free. But, you see, they tell you that, but the truth is that the cancer will outsmart every drug we have, eventually. Well, it can. So, anyway, she’s now been fighting cancer for 20 years. Do you think that she keeps going because she feels that she is important and vital to the country? Do you think she refuses to give up because she simply cannot face the prospect of resigning with a Republican president in office? She’s not gonna give a Republican president the chance to replace her?