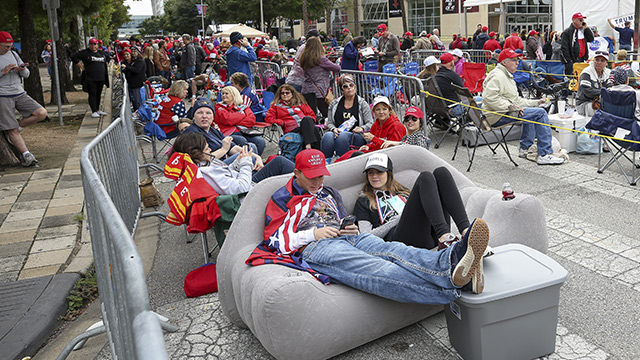 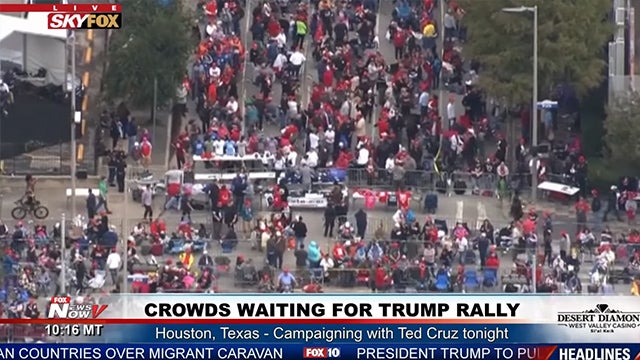 RUSH: It’s 100,000 RSVP’d for a chance to see the Trump-Cruz rally. The venue holds 17,000 or 18,000. People are lining up 24 hours in advance. Now, folks, a little common sense here. This is Texas, and remember the Drive-Bys told us that Beto O’Rourke was the answer to the mean-spirited, rock-ribbed conservative, Ted Cruz. Beto O’Rourke. He’s loved by everybody outside Texas — $38 million he raised in a quarter.

Except there’s a problem, and that is that Ted Cruz has been creeping ahead in even the polling data, and it’s being acknowledged by the Democrats that it is real. Yet they have continued to maintain that Beto O’Rourke is gonna be the guy that could take out Ted Cruz. Has anybody found a hundred thousand people trying to get into a Beto O’Rourke event? You have a venue that holds 17,000 people. You have anywhere between 75,000 and a hundred thousand people who want to get in. That is not the kind of thing that happens within a political party that is losing — losing favor, losing support, losing elections.

Everywhere Trump goes, these rallies… You know, I ought to post this at RushLimbaugh.com. I have some friends out in the Phoenix area, and the Trump rally in Mesa, Arizona, they thought about going to it. Until they got there and found out how impossible it would be. They sent me a video that they took with their iPhone XS Max driving along the entire line. In order to make the video fit to be in a size they could email me, they had to run it at twice-normal speed, and it’s still 35-seconds long.

And then there’s a note.


“This doesn’t even show the people zigzagging through the parking lots to get in.” There was a mile-long line long of people to get in to see Trump in Mesa, Arizona. The media is not reporting this aspect of the Trump rallies. The media is not telling you how many people want to get in, are trying to get in, how many people are showing up and standing in line, because if they did… Local media may; I don’t know. National media — CNN, PMSNBC, ABC, NBC, CBS — are not showing this, because if they did, it would put the lie to the notion that all the energy is on Democrat Party side.

Meanwhile, there’s not a single Democrat drawing anywhere near these kinds of rallies, these kinds of people. What the Democrats are doing is continuing to show up where Republicans are having dinner and harass them. The Turtle and his wife were at a restaurant in Louisville, Kentucky, and some madcap, asinine protest shows up and just starts shouting things. The Turtle just sits there, doesn’t acknowledge him, doesn’t move, doesn’t say anything. The other patrons in the restaurant are just watching all this go by, but this guy’s making a spectacle.

I watched ’em talk about this on Fox today, and they were talking (impression), “It’s such a shame that we’ve lost civility and so forth. This isn’t about civility! This is about what I brought up three weeks ago. This is not how decent people behave, and I said, “Decent people don’t know how to deal with this kind of indecency,” which is what we’re up against on the Democrat side. Whatever you want to call it — lack of civility, indecency, whatever it is — it is not the things you associate with winning. 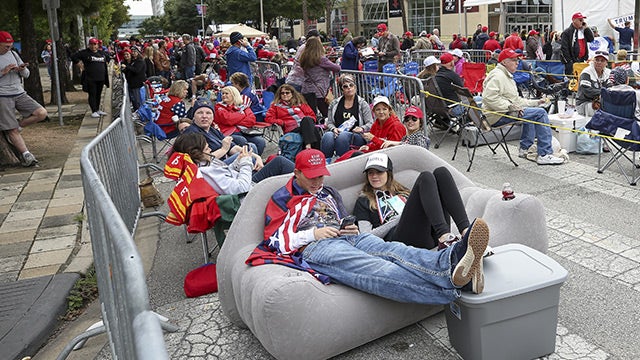 It’s not the kind of behavior you associate with good times, good vibes, positive outlook! These are people enraged, angry, disappointed, depressed, what have you. The contrast here is striking, and that’s why you do not see any news coverage of the size of… Let me tell you something. The number of people, the size of crowds to get into a Donald Trump rally is 10 times the size of this mob that is invading the country currently coming up through Mexico.

You’ve seen those pictures. The media’s happy to show you those pictures. The media can’t wait to show you this so-called caravan of 7,000 people, soon to be 8,000 people and they it claim might end up being 10,000. They’ll show you pictures of those people all day. Here’s what you need to do. When you see that picture of 7,000 people or what is said to be 7,000 people, multiply that times 10. That’s the number of people trying to get into a Donald Trump rally in Mesa, Arizona, and even more than that at a rally in Texas.

I wish they’d use AT&T Stadium. That’s Jerry Jones palace where the Cowboys play. Put a hundred thousand people in there. So you think the Democrats can get together a mob of 7,000 people, have ’em march up through Mexico. “Wow, man! Look how committed they are! Those people are really,” and we’re supposed to sympathize with it. They don’t show you the thousands upon thousands standing outside, lining up 24 hours in advance to get into a Donald Trump rally.

And I’m telling you, that kind of thing does not happen to people losing elections, who are about to lose elections, who are losing favor with the American people. It does not happen. How many of you…? By the way, how many of you would join a crowd of 75,000 people at a 17,000 or 18,000 seat venue? And yet they do. I wouldn’t. I wouldn’t… If I drove by and you saw the crowd that big, I’d say, “Okay, go home.” I’d watch it on TV, try to find it on TV. But these people want to be there. And you know who they are? 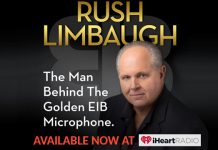 Rush Was More Right Than He Knew! Biden Orders Us to Get Vaccinated or Wear the Mask

Rush Picked Her Out of the Crowd: Elise Stefanik, Superstar