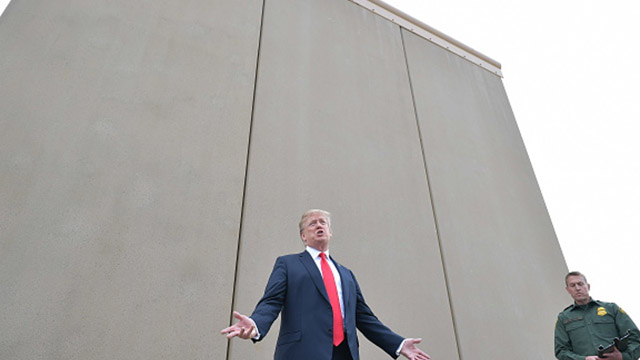 I understand the desire for this, because you declare the emergency and then you go get the money from wherever. The latest figure, by the way, is that they have found $7 billion, and you declare the emergency and you start building the wall. There’s a political price that will be paid by declaring an emergency in addition to something else. By declaring an emergency, you know as well as I do that the Democrats already have somebody standing by at the nearest liberal federal district court to go in and file a suit asking a judge to put a temporary stay on the national emergency, on the basis that the president doesn’t have the constitutional power to do it.

They’ll find a liberal judge. “Damn right! The president is way overstepping.” So there will be a temporary injunction. The emergency will be brought up short, it will be stopped, and then guess what becomes the subject? Not the border, not the wall, not immigration, not the endless parade of people crossing. But instead, of the emergency and the court action becomes the sole focus of the media and everybody else talking about it. And the whole process is stopped, because once a judge issues a stay (like happened during the travel ban or anything else), then everything’s brought to a screeching halt.

Meanwhile, while everything’s brought to a screeching halt here and the exodus of people coming into the country continues. The national emergency for funding for the wall is sidelined for however long it takes to work its way up to the Supreme Court to get a final judgment on it. But the thing about declaring an emergency is while it would be very satisfying to hear the president to tell Congress to go pound sand, to go get the $7 billion from wherever he’s got it, it wouldn’t happen. Unless… We had a caller here say, “Well, let’s have our own person standing by at a friendly court.

“Let’s beat the left to the court. We’ll get a judge to declare the thing is okay.” The left would still go find a judge. All you need is one federal judge to shut it down. It can happen, sadly. But then the whole subject changes once a national emergency has been declared. Right now, during the shutdown, the focus remains the wall! And it remains what to do about the ever-increasing numbers of people coming here illegally. And the real big problem is deportation! Once they’re here, getting them back — the illegals, getting them back — across the border becomes hard.

I mean, that’s a challenge for any of the law enforcement agencies that are responsible and charged with this. But declaring an emergency brings everything to a screeching halt and changes the entire focus — the narrative, if you will — about what is this story. While there might be some temporary satisfaction… I’m still open-minded about it, but I’m not sure. I think this is why there’s a reluctance. It’s obvious that there’s a reluctance in the White House to declare an emergency.

Because if it’s easy to do, they would have done it by now. Trump’s on record as claiming this is something he’s got ready to go and is fully behind, and yet he just doesn’t pull the trigger on it, and I think… And there may be other reasons I haven’t thought of, but I think these are two of the reasons why. A, we know it’s gonna be shut down by a judge, by a court, which will entail a very protracted process to take it through the courts to get it adjudicated positively.

It could take months to get to the Supreme Court. Meanwhile, the illegal immigration continues and there’s nothing to be done to stop it because the declaration — and there’s no reason for Democrats to keep negotiating after that, ’cause they’re getting what they want. They’re getting a never-ending flood of illegal aliens crossing the border and an overmatched Border Patrol and Customs trying to stop it, and the mechanism to stop it has been stalled in the courts — i.e., the national emergency.