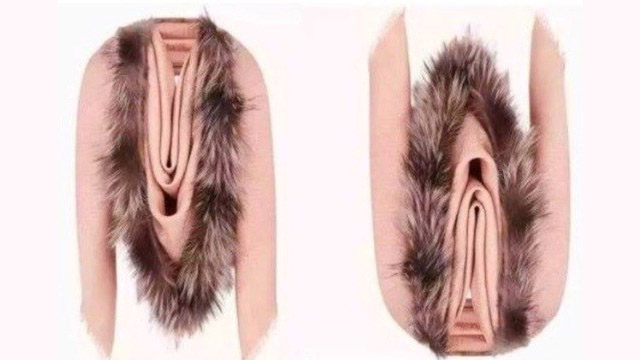 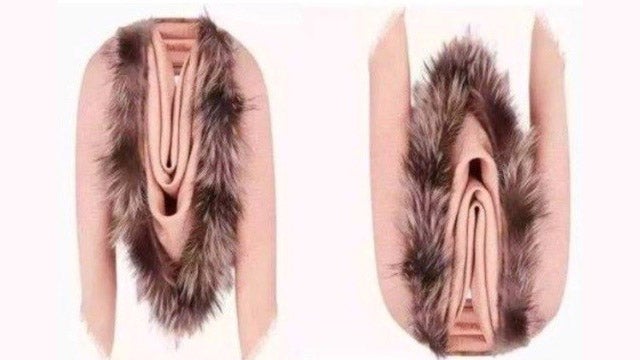 RUSH: No, don’t put those vagina things up yet. I’m not there yet. You won’t believe what’s happened. You ever heard of the design company Fendi? Obviously they’ve got some gay guys as designers there because they’ve designed something to replace the vagina hats that these women… (interruption) Hang on. Don’t put it up. I’ll call for it. The guys at Fendi, somebody, the designers have created a… Well, it’s a scarf, shawl, jacket combo that is made… (sigh) It’s… It… It’s.. Okay, put the picture up. Let the picture describe it for those of you watching on the Dittocam. There we go.

On the left is how it is sold. They designed it upside down. On the right, when you reverse it, is how it should look. Uhhh… They don’t… It’s like the gay guys have never seen a vagina who designed this thing. I’m sorry. For those of you not watching the Dittocam, I can imagine you’re frustrated. We’ll send these up to Koko at RushLimbaugh.com, and he’ll get ’em posted pretty quickly. But this is designed to replace the vagina hat. This is the vagina shawl and scarf for women who want to show their anger at Trump and other Republicans, I guess.

Look, folks, they’re doing it. I would be remiss to not… I mean, in the age of Blasey Ford and all this, I wouldn’t be able to look at myself if I tried to hide this story from you. They actually think women are gonna buy this, and they probably will. They actually think women are gonna buy these things and wear them. But Fendi has recalled them. The Fen… (interruption) What are you saying? (interruption) You don’t believe this?

You don’t believe…? (interruption) I’m telling you! You think I…? (interruption) I don’t have a graphic-artist degree. I didn’t create those. Fendi has pulled them, by the way, because they’re designed upside down. When you see the vagina shawl here, you’ll know exactly what I’m talking about by upside down and how they don’t know what they’re doing there and why they had to pull it.

RUSH: The upside-down version of that, that’s a joke on social media. You’ll see it at RushLimbaugh.com. It was… (chuckles) They’re claiming it was an accidental design and it had to be pulled. (chuckles) Regardless, I’m happy that we had the opportunity to demo this for you today, folks.