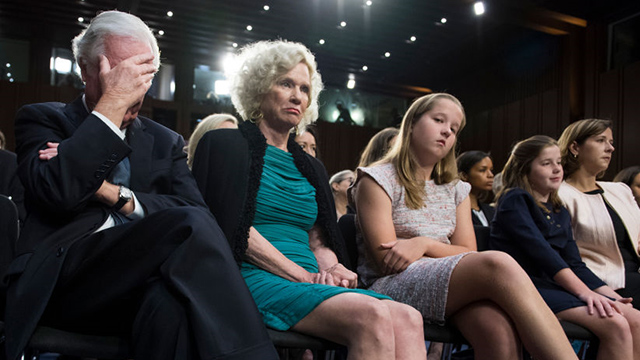 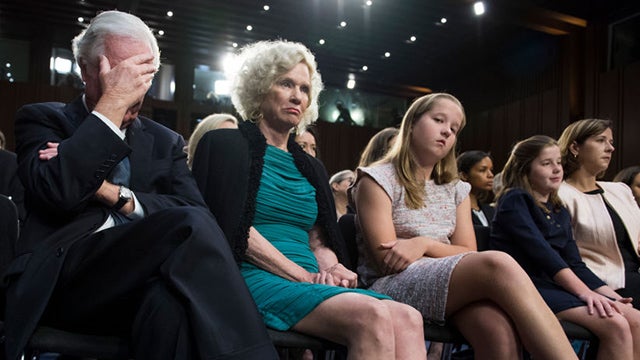 RUSH: I have here a screenshot of something I saw on Fox News.

This would have been a couple/three days and nights ago, and it is a sample of emails that Amy Kavanaugh is receiving. The mainstream media is not reporting any of this. If it weren’t for Fox News, this would never have appeared on TV. There are three excerpts of three emails sent to Amy Kavanaugh, and I’m gonna read them to you. I’m gonna give you a countdown. I’m not gonna say the unmentionable words, but you’ll know what they are.

But if you’re listening with young ears that you don’t want to hear, I’m gonna count down from five, and you should turn the radio off for, like, 45 seconds and come back. Ready? Five… Four… Remember, when I get to one, if you still listen and you find it objectionable and complain, it will fall on deaf ears because you have been warned. Ready? Three… Two… One… Email sent to Amy Kavanaugh: “Please tell your rapist, lying, cheating, corrupt b—h of a husband to put a bullet in his ugly f—–g skull.” Another email to Amy Kavanaugh: “Hey b—h, did you know your husband was a rapist before you married him?”

Another email to Amy Kavanaugh: “YOUR HUSBAND IS A LIAR, THIEF, RAPIST AND PROBABLY A PEDOPHILE. BURN IN HELL…” What was the proudest day in the Kavanaugh family’s life was ruined by a circus of protesters welcomed into the hearing room by the Democrat Party. Remember the picture of Mr. and Mrs. Kavanaugh, the parents, with their heads buried in their hands? They were ashamed on the day that should have been one of the proudest days of their lives. The left: smile, with laughter and with glee. Kavanaugh’s young daughters were there and had to witness it as well, not to mention his wife.

Now Democrat voters are sending this stuff to Brett Kavanaugh’s wife, and still they hang in for this nomination because Brett Kavanaugh is a patriot, in addition to being a brilliant scholar and legal mind. My point is exactly this: This is the Democrat base, and they are demanding this treatment of Kavanaugh. The Democrat Party expects to be rewarded by their base with massive turnout. They believe independents are so outraged at what Kavanaugh has done — they’re so mad at what Kavanaugh has gotten away with — they can’t wait to show up and vote against him.

Everybody wants to vote against Kavanaugh really because everybody hates Donald Trump. Meanwhile, Donald Trump draws tens of thousands of people at every rally he attends with double that number outside unable to get in. Barack Obama can’t draw more than 700 people to his rallies, and I’m not making that up. It’s 700 people max. And then Michael Moore. Michael Moore has this new movie called Fahrenheit 11/9. I guess he’s run out of creativity.

Fahrenheit 9/11 was his first movie, anti-Bush. It did well, got an Oscar for the thing. So time to go back to the drawing board, rework it for Trump. Fahrenheit 11/9. Guess what? Up there at the Toronto Film Festival, it’s voted the eighth or ninth best flick of all of those that were shown, and its opening weekend tanked at $3 million taken in with over a thousand screens. Now, does that add up to a big blue wave?

I mean, you would think that these Democrats demanding this kind of depraved behavior from their elected Democrats, cannot wait to get out there and vote. Then why aren’t they showing up for Moore’s movie? And why aren’t more than 700 showing up for the great Obama as he embarks on whatever he’s doing? Yeah, Michelle Obama supposedly doing pretty well on the book tour. But note that Michelle Obama’s totally into Michelle Obama, not this other stuff. She’s out selling herself, not bashing Trump per se by design and by purpose. So I don’t know. Is there a backlash out there that’s waiting to be? Are decent women fed up with what the Democrats are doing or not?

You hope, but you just don’t know.

RUSH: Samantha. Samantha in Franklin, Tennessee. You’re next. It’s great to have you with us. Hi.

CALLER: Hi, Rush. It’s really a pleasure to speak with you.

CALLER: I agree completely that she will not be there Thursday because how can you go under oath and then the answer to every question be “I don’t know –“

RUSH: Wait, wait, wait, wait. You may be more informed than I — which on this, is possible ’cause I’ve gotten so ticked off at this story that their aspects of it I’m avoiding because I don’t think she gonna be there, either. 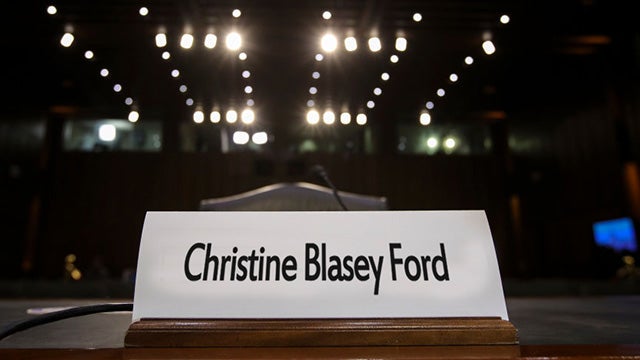 RUSH: Has she agreed to testify under oath? Remember her original conditions were not under oath, and she wanted to go last. She wanted Kavanaugh to go first, which again turns presumed innocence upside down.

RUSH: She had all these conditions, and one of them was not under oath. So do we know for sure that she has agreed to testify under oath?

CALLER: Well, I guess not. (laughing) But how else can…? So here’s the thing with me. For a visual… So the reason why they don’t want a lawyer questioning here is they need the visual of the mean, vicious Republicans not believing her. You know, and something may well have happened to this woman. You know, I’m a woman. Stuff has happened to me. I get it. But there’s level of, at this point, they have pushed it to where we have to have that visual.

RUSH: I agree with that.

RUSH: They want to get even for Anita Hill, in addition to everything else.

CALLER: Yes. Yes. But, see, I’m… You know, everything I read, which is all speculation, all of it, but when you start thinking about it, they have to have the visual know the visual of the mean Republican, old white men speaking to her. They have to have —

RUSH: I don’t think they need it. I think in their minds, all they have to do is say, “You know, she’s not gonna show up. She can’t! Now that this has turned into a circus, she can’t. She knows she’d be mistreated by the Republicans.” It’s all they gotta say, in their minds. The press is off and running with it, reporting is as though it already happened. Look, I got to go because of time. I appreciate it. Amy Kavanaugh might be one of Kavanaugh’s daughters. I thought it was his wife. But the emails are still accurate.

RUSH: Oh, by the way. Apparently, I erred, ladies and gentlemen. I assumed that Amy Kavanaugh was Kavanaugh’s wife, the recipient of those despicable, disgusting, insulting emails. Actually, Amy Kavanaugh must be one of his daughters, which makes it actually even worse. His wife’s name is Ashley.

Of course, when I make a mistake… You know, it is so infrequent that when I make a mistake, people just jump all over it. They jump in there! They start pointing fingers. They tell everybody. Most people are allowed to learn from their mistakes. Not I. No, no. When I make ’em, it’s a serious, serious breach. I wouldn’t even call that a mistake. I mean, that was just an incorrect assumption. The substance, however, was not changed by whoever was sent those emails.