CALLER: It’s good to hear your voice, Rush. May God bless you and your family.

RUSH: Thank you. Thank you very much, sir.

CALLER: My point is, with the challenges by Trump’s legal team and then after he made that speech on YouTube the other day, all we’re hearing from the media is, “There’s no evidence of fraud. There’s no… They’re baseless claims. No evidence! No evidence!” But there was never any evidence of any kind of wrongdoing in the Russia hoax, but we heard that 24/7 for over 3-1/2 years.

RUSH: Right. They’re a bunch of hypocrites. Great job of pointing it out. Total, total hypocrites. But, I mean, there’s nothing new about that. You’re absolutely right about everything that you’ve said. You know, there was not a shred of evidence in the coup because it was all made up, totally. Never any evidence. There shouldn’t even have been an investigation because nothing happened.

Same thing in Ukraine. They totally made that up to impeach Trump — and your point about “the nature of the evidence is not what matters.” It’s “the seriousness of the charge.” No, that’s out the window when Republicans are asking questions.

RUSH: You still there?

CALLER: Yeah, I’m still here. I just enjoy hearing you talk, Rush. You know, you are the voice of truth and light, and it’s just a pleasure to hear you.

RUSH: Well, thank you. You know (chuckles), it is for me, too, if I may be so (ahem) honest. But look, it’s still a good point. The question, as always, is what to do about it — and that just opens up the lines of frustration again, because we’ve had 3-1/2 years of outright lies about things that didn’t happen, that did delay and thwart the Trump agenda.

Despite how much he got done, they lied through their teeth in every possible place and way. New York Times, CNN, Washington Post, you name it. They lied, made it all up. Same thing with Ukraine, impeachment. All of it was totally made up. They just broadcast a bunch of lies. Now? (laughing) They demand evidence? It’s all over the place!

There’s smoking gun video of suitcases of ballots being dragged out from underneath tables after election monitors have been kicked out of the room. The amount of fraud that went on in Georgia, I’ve got half the Stack here devoted to that, if I wanted to get into it all. Look, it brings up a point that I have been making for a long time on this program — many, many moons.

The problem is that I don’t know what percentage, but it’s close to 40% and maybe hire of the people of this country don’t know it. And that is, there isn’t any news anymore. Not what people think of as news. What do you people think of as news? News is where somebody goes someplace where something is happening, and they watch that thing happen, and then they tell other people who weren’t there what happened.

It’s reporting things that many people, most people didn’t see. That doesn’t happen anymore. That is not what’s happening. Today we have left-wing activists disguised as journalists promoting the agenda of the Democrat Party — and it is made to look like news. And 40% of the American people who are clueless because all they watch is mainstream media, believe that it’s still news. They believe they are hearing the news.

When they watch the lies and the distortions of the Russia hoax, the coup, they think it’s news. And they think when it was over, that there was any evidence, that the Mueller investigation, “Well, nice try, but it didn’t find anything.” They don’t know it was a total hoax. They don’t know it was all made up. The people that only watch mainstream media have no clue what it really was.

So how do we deal with it? And when there’s no news — and there really isn’t, folks. There isn’t any news. This is why I call myself America’s Real Anchorman, because I do the news. I do endeavor to tell you what is happening out there, in addition — the added bonus for you is — you also get my opinion. 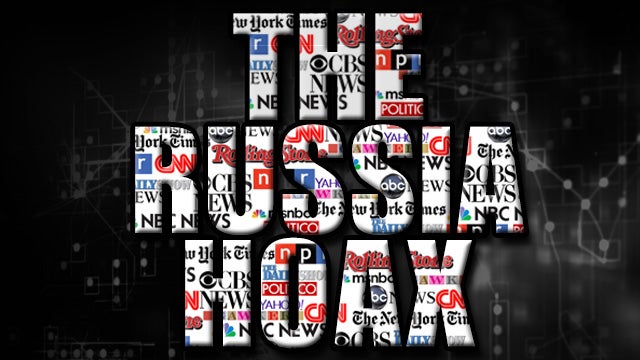 And in order for me to be persuasive, you need to understand who the Democrats are. If I’m gonna be here criticizing them and telling people to disavow them, I better tell you why. So I do. I engage in more real journalism and more news here than anybody in mainstream media today.

And this has been the case since before Trump. It crystallized and intensified during Trump. But during the eight years of George W. Bush, it was the same thing. You look at the way they covered the Iraq war and the War on Terror. There isn’t any news. Not like people think there is news.

RUSH: San Marcos, California. This is Tom. I’m glad you waited, sir. Great to have you here. Hi.

CALLER: Hi, Rush. It’s a pleasure to talk with you. I just really have only one question, and it is: How much fraud does it take to overturn an election?

RUSH: You mean how much fraud do the Democrats have to engage in to cheat and win? Is that what your question is?

CALLER: Yeah, because they say there’s no overwhelming evidence of fraud, and yet we have certificates — 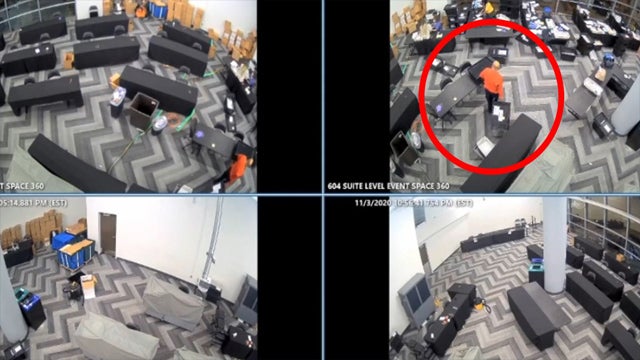 RUSH: Sorry, but that’s bull crap. There’s all kinds of evidence out there, but that… See, this is the point about there being no news. All they gotta do is say, “There’s no evidence,” and guess what? New York Times repeats it. CNN repeats it. In fact, they originate it. They originate it. They run the Democrat Party for all intents and purposes. “There’s no election fraud.”

So people are watching CNN, reading the New York Times — those that do — and they think it’s the journalism. They think it’s the news. “Oh, there’s no fraud. Republicans are kooky again. Republicans are making it up again,” and that’s what they’re told. I have a story here… Tom, it sounds like you were asking another question. Do you have one other point you wanted to make?

CALLER: Well, I just… You know, it was kind of a leading question, “How much fraud does it take to overturn an election?” ’cause if they say there’s not — the media, the mainstream media says there’s not — enough evidence to pursue it any further, and all I’m saying is, “How many votes does it take to turn an election?” If you’re gonna allow cheating to make it happen, then a little bit of cheating is okay, but a lot of cheating is not okay?

RUSH: Not quite sure what the foundation of the question is. I’m not sure what you’re really asking is.

CALLER: I’m just saying, say a store was getting robbed and they say, “Well, only a couple of people robbed it, so we didn’t really have a robbery.”

RUSH: Oh. Oh. Oh. So you’re saying they are admitting some fraud but not enough to make any difference?

RUSH: Okay. Okay. I missed that you said they were admitting some fraud. I have a story here that deals with this very subject, and it runs at FrontPageMag, which is David Horowitz’s magazine, website. Here’s the headline to the story: “The Dem[ocrat]s Had No Choice But to Rig the Election. This Time They Were Ready — Because There Was Too Much at Stake.”

“They had no choice…” They had no choice because their candidates suck. Are you telling me Joe Biden is the best they could do? I mean, you really, really believe that? Folks, that’s the first bit of evidence I need that they had to cheat. There’s no way! I’m sorry. There is no way Joe Biden legitimately gets elected president.

I don’t care how many people vote for the guy with the D next to his name on a ballot. Joe Biden hasn’t gotten anywhere near winning the presidency in the two or three times he’s tried before this. Their issues? They can’t even be honest about what their issues are! They are in favor of looting and destroying their own cities. You’re telling me this wins elections? I don’t believe it.

RUSH: This FrontPage Magazine story here. It’s by Ayad Rahim. And again the headline: “The Dems Had No Choice But to Rig the Election — 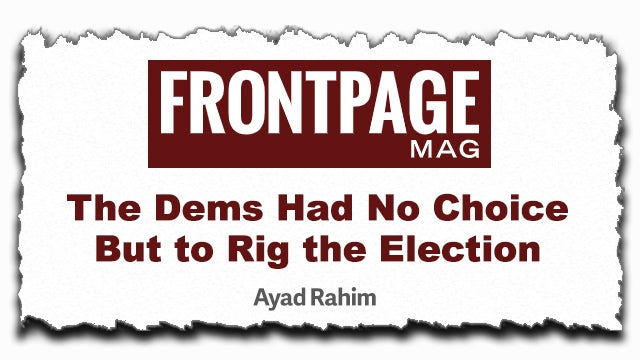 “This time they were ready — because there was too much at stake.” Let me give you a couple pull quotes here from this piece. “In the last weeks of the presidential campaign, Donald Trump was drawing tens of thousands of enthusiastic supporters several times a day…” I mean, in some cases 50,000 people at one rally, and he was doing three to five rallies a day!

“[P]eople across the [fruited plain], and at sea, formed massive rallies and caravans of their own. Meanwhile, the Biden camp was barely limping along, with one or two funereal gatherings a week, before, at best, a few dozen people … the campaign’s apparent strategy was to minimize the candidate’s exposure (and let the media do the work for them).”

And they did, “not only because the candidate was feeble and the campaign advocated lockdowns, but also because evidence began emerging of the Biden family’s dealings with foreign oligarchs and corrupt countries — most importantly, Communist China. So, as election day approached, things were looking good for the president.

“Indeed, as the results came in on election night, the president was headed for re-election. He was ahead in the Electoral College, and had big leads in the handful of remaining states he needed to win.” Don’t forget, an 800,000-vote lead in Pennsylvania. “Then, suddenly, the counting stopped.” (Gasp!) Just like that, the counting stopped, not just in one state, but five.

You see, “A more significant factor at play was the Deep State. The Swamp rats had been drawn out of the sewers, for all to see. Their unchecked leeching off the country, and their growing grip on society, were being questioned, and might even be checked. The rats wanted to get back to chomping as before, and they were supremely confident they could do it. 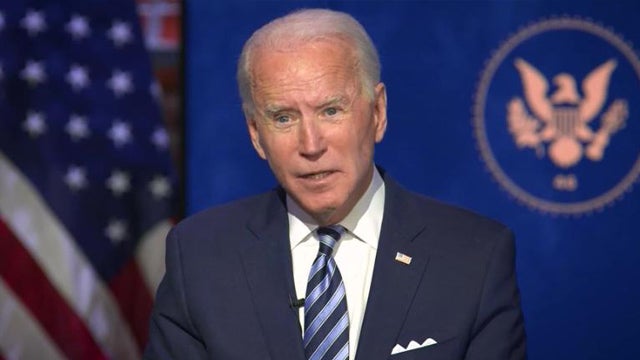 “For, even after the lights were turned on, they still got away with success after success — with almost no legal, financial, professional, or political consequences. And it’s an impressive roll call of accomplishments: spying on domestic presidential campaigns (not only Donald Trump’s, but Ted Cruz’s and Ben Carson’s too); sabotaging a presidential transition and administration.

“Fabricating tales of treason and foreign control of the president … an endless string of preposterous and farcical charges and investigations (on the public’s dime); and attempting to cripple the country — all of which profoundly affected the political process and the country’s elections. And all of that, after eight years of politicizing and corrupting the IRS, the Drug Enforcement Administration, the FBI, the Justice Department, the judiciary, the intelligence services, and the military — with a corrupt and fawning press, covering everything up, instead of shining a light.”

They had no choice!

They had to do this. In order to keep all of that from being seen — in order to keep Trump from exposing all of that, Durham from exposing all of that — they had to steal this election. “Joining the Deep State were the media, Big Tech, schools, and entertainment — most of them, in bed with Communist China. … So, this year, the Democrats would take no chances — they wouldn’t make the same mistake the stunned Hillary [people]. This time, they were ready — because there was just too much at stake.”