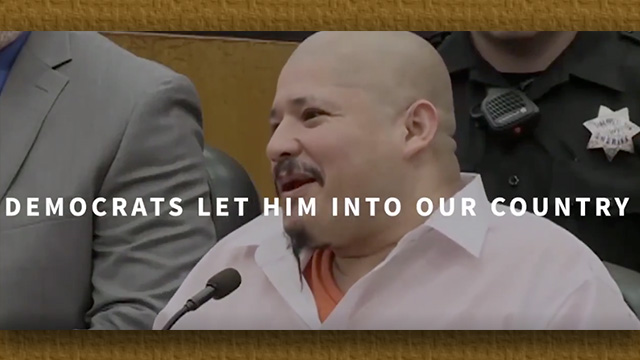 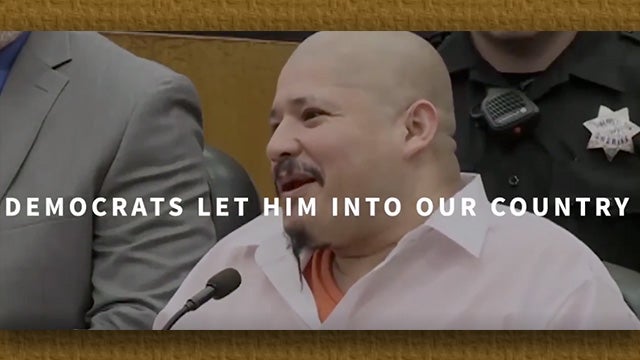 RUSH: I have here audio sound bite No. 1. We have a Trump ad that says the Democrats are gonna let more illegal murderers in the country if they start winning elections again. Now, this ad is really tough to hear. It’s an ad made for visuals. It’s on Trump’s Twitter page — a new ad targeting the Democrat Party and illegal immigration — and I’ve got a transcript.

It is outrageous what the Democrats are doing to our Country. Vote Republican now! https://t.co/0pWiwCHGbh pic.twitter.com/2crea9HF7G

It’s gonna sound like a bunch of noise here to you, but the point is the ad says Democrats will let in more illegal murderers — and I want to remind you again: This is what pushback looks like. This is what pushing back against the elite liberal order looks like this is an ad that probably no Republican other than Trump would have the guts to run.

JUDGE STEVE WHITE: (music/background noise) Ladies and gentlemen of the jury, please step out into the hallway.

BRACAMONTES: They’re f-(bleep)ing dead. I don’t f-(bleep)ing regret that. I will break out soon and I will kill more.

ON-SCREEN GRAPHIC: “Democrats Let Him into Our Country.”

JOSE: Y pedir un pardon. (Caption: “I want to enter and ask for a pardon.”)

TRANSLATOR: (outdoor noise) He says he wants to apply for pardon for the felony he committed.

ON-SCREEN GRAPHIC: “Who Else Would Democrats Let In? (still of smiling Bracamontes)

RUSH: Okay. Now, let me tell you who the participants here were. Among the voices, Judge Steve White, convicted killer Luis Bracamontes and a Central American migrant named Jose and a female translator. Judge Steve White opens: “Ladies and gentlemen of the jury, please step out into the hallway,” and then the convicted killer Luis Bracamontes: “They’re f—ing dead. I don’t f—ing regret that. I’ll break out soon and I’ll kill more!”

And then there’s an on-screen graphic: Democrats let him into our country. More from Bracamontes: “See? The only thing that I f—ing regret is that I f—ing just killed two of ’em. I wish I f—ing… The only thing I wish I f—ing killed more of those motherf—ers. I’m gonna kill more cops soon.” Five more seconds under an on-screen graphic: “Democrats let him stay.” Then eight seconds of sounds of caravan migrants tearing down barriers.

And then we have the Central American migrant named Jose, who says in Spanish, “I want to enter and ask for a pardon.” Anyway, it goes on and on. The Democrats are furious over this ad. They are livid over it! What do you think they’re comparing this ad to? They are comparing this ad to Willie Horton. The furious Drive-Bys are out there saying that this is Trump’s version of the Willie Horton ad.

ALISYN CAMEROTA: Roger Ailes casts a long shadow. (pause) Roger Ailes has died but he was the mastermind behind Willie Horton (sic) and his acolytes are in the White House.

GAYLE KING: This ad is drawing comparisons to the 1988 Willie Horton ad.

JIM ACOSTA: What is Willie Horton in Spanish?

DON LEMON: People are comparing this to the Willie Horton ad.

CHRIS CUOMO: I call this “a Willie Horton redux.” 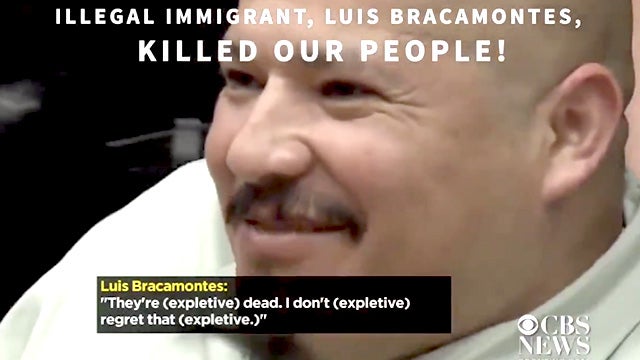 RUSH: That’s Don Lemon there. “Oh, my gosh!” Oh, my gosh. There aren’t any white terrorists in this ad, though, Don. Sorry. So many of you ask, “What was the Willie Horton ad? What was that?” Let me tell you about Willie Horton was a murdering rapist. He was a prisoner in Massachusetts. The then governor — The Loser, Michael Dukakis — was running for president in 1988, the year this program debuted, and he had a prisoner furlough program.

Dukakis, The Loser, oversaw the prison plan that let Willie Horton out of jail. When he’s out of jail he went in and created mayhem and murder and rape or whatever at a gas station. So the Republicans put together an ad explaining what happened here. It was “the infamous Willie Horton ad.” This is the ad they still can’t get over 30 years later, and they’re still blaming Ailes. Ailes did not make the ad! Roger Ailes did not make it.

Here is the Willie Horton ad…

ANNOUNCER: Bush and Dukakis on crime. Bush supports the death penalty for first-degree murderers. Dukakis not only opposes the death penalty, he allowed first-degree murderers to have weekend passes from prison. One was Willie Horton, who murdered a boy in a robbery, stabbing him 19 times. Despite a life sentence, Horton received 10 weekend passes from prison. Horton fled, kidnapped a young couple, stabbing the man and repeatedly raping his girlfriend. Weekend prison passes. Dukakis on crime.

RUSH: And it was just right on the money. I mean, it’s exactly what happened. There was nothing made up about it. But they had the mug shot of Willie Horton in the ad, and so that allowed the Democrats to run around and start accusing the Republicans of racism. “How dare you show a picture of Willie Horton?” Well, what are we supposed to do? That’s who he is. “Yeah. But using the mug shot,” as though they don’t do that. “The mug shot? That’s horrible! That’s so racist.” 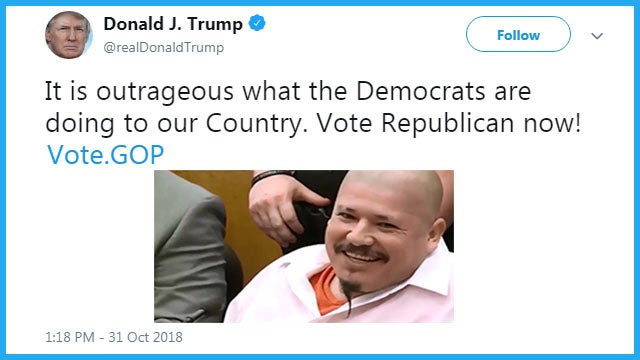 Anyway, this ad that is running on Trump’s Twitter feed, the Democrats are fit to be tied, ’cause everything in their playbook is old. Everything they relate to is old. They say, “It’s the Willie Horton ad all over again!” The reason they’re worried about it is the Willie Horton was effective, and so is this Trump ad. Murderers are coming into the country. This caravan is not made up of a bunch of innocent young women and children and illegal immigrants in general. It includes gang members and coyotes for the drug cartels and so forth.

We all know what’s going on here.

It’s just one person has the ability and the audacity to call it all out.