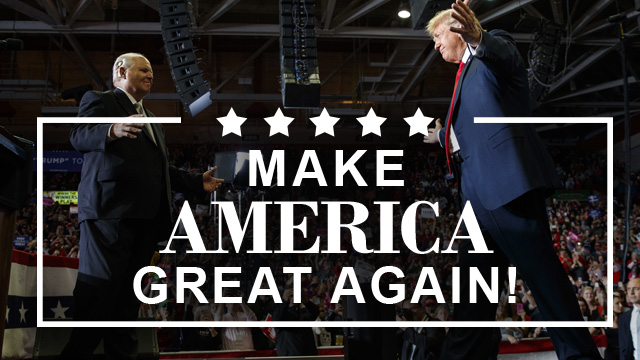 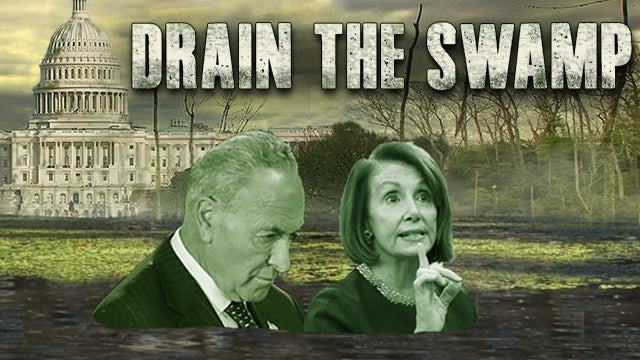 RUSH: Yes siree. So here we go, folks, three hours of broadcast excellence hosted by me, the new villain in Washington, D.C. Wait ’til you hear the media montage that we have put together. This is all my fault. I made the mistake of taking Trump seriously and then broadcasting it and now everybody’s in trouble because of me. You think they were mad at me with Donovan McNabb or with Michael J. Fox. That’s nothing compared! Everybody… 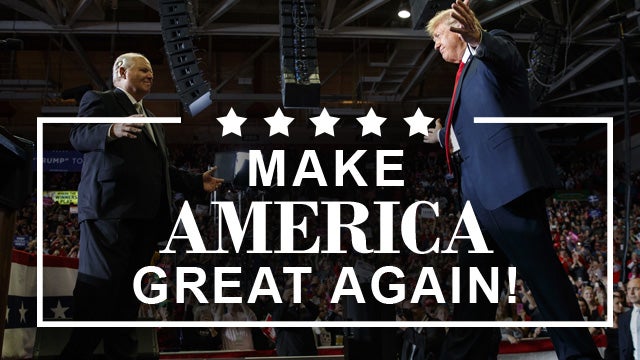 I tell you what, these people are acting like life as we know it is about to end even before climate change kills us all. This is stunning to watch! All because Mad Dog Mattis is leaving, now there is nothing holding Washington together, because Trump will not compromise and because Trump will not engage in normal behavior for Washington, D.C., because Trump is causing a government shutdown at Christmas, where Christmas employees may not get paid and so forth. I mean, I’ve never seen anything like this.

I mean, these people ought to realize if this is true, Trump’s imploding and he’s gonna be gone before very long and they’ll be able to pick up the pieces and put it all back together again. But they’re treating it as though a secretary of defense resigning is the end of the can you be, it’s the end of foreign policy, it’s the end of sanity — and now there’s no “adult supervision” left around Trump and he’s totally dependent on me and Fox News.

We’ve got audio sound bites here to demonstrate some of this, show you some of the things I’m talking about terms of the media meltdown. In fact, let me just get this out of the way. Grab audio sound bite No. 3. This is the montage we put together of the media. You see, now, you have to understand: They thought that they had Trump. They thought that there was no way the House was gonna vote to add $5 billion for a wall or for border security. They thought it wasn’t gonna happen. Chuck and Nancy are out there telling everybody it isn’t gonna happen.

Nancy’s at a bar drinking and partying and dancing, and the Democrats are singing Christmas carols on the House floor on Wednesday night. And they really don’t think these votes are gonna be there in the House. A bunch of Republicans lost and left town because they had no place to live. It wasn’t gonna happen. Except it did. Except it did. Now Trump has positioned these people, these Democrats as unwilling to stop a government shutdown over $5 billion for a wall. Forget that the $5 billion is for a wall.

The Democrat Party is willing to let this government shut down happen over $5 billion, period. Now, you add to it that it’s the wall and border security; it makes them look even worse. But for a bunch of people that don’t even blink at spending a trillion dollars, it is they who are shutting down this government over $5 billion. It is the Democrat Party doing this. This is so easy to avoid. But this is how much they are afraid of anything substantively happening that would improve our illegal immigration situation.

They simply cannot abide it. It’s a measly $5 billion. What Trump did — and I’m just gonna go out on a limb and say this. What Trump has done here is tactically really smart, and no one is gonna say it because no one’s gonna have the courage to say it (especially in the Beltway) because of the reaction they would get. But Donald Trump blindsided the swamp yesterday. He put the Democrats in the position here that they can’t… You know what their only retort to this is?

(sobbing) “I can’t believe that 400,000 federal workers are going to miss their paychecks at Christmas and not have a fun holiday season. It’s so heartless and it’s so mean!” That’s their only comeback to this. They cannot talk about the issue. They do not talk about the substance of illegal immigration, border security, the wall. They don’t want to go there. It’s the same thing, the shutdown: Blame the Republicans for “having no heart or cold heart, unwilling to care about the suffering.” Most of these people we’re talking about are on Christmas break anyway!

They’re not gonna be shunted out of their jobs because they’re not working at the moment, and this thing isn’t gonna go on very long if it happens at all and everybody’s gonna be back to work. There’s nothing detrimental to anybody that has ever happened after a government shutdown. Nobody’s been ruined, nobody’s been destroyed, nobody’s ever lost their job. Nobody ever lost their Thanksgiving turkey, nobody ever lost Christmas presents. It’s never happened!

This shutdown won’t even affect much more than 30%, if that, of the government. The only retort they’ve got is (sobbing) “Four hundred thousand,” and some people say 800,000, “federal workers! It’s Christmastime and they’re missing their pay!” It’s a bunch of people sounding like Christine Blasey Ford all the time, when nothing long-lasting or even short-term lasting pain-wise ever happens after a government shutdown. So they didn’t think that the House would come up with the votes.

And Trump was gonna be embarrassed, and now the Democrats are back on their heels and are now being forced to defend not securing the border. They’re being forced to defend not authorizing or voting for a measly $5 billion. At the same time, Trump has got his base solidly behind him again. Now, this is not being said because this really is one of the many things that irritates them. For two years, they’ve been trying to drive a wedge between Trump’s base and Trump because that has been necessary in order to get his approval numbers down to the 30% area where they think they can force him out of office.

What Trump has done has solidified the support of his base here. I was with a bunch of them last night. Believe me, they are ecstatic. I got an award last night, a Lifetime Achievement Award. Charlie Kirk and Turning Point USA saw fit to give me an award. And of course, when you get an award, you gotta go out there and you gotta make some remarks. I made some remarks. It was at Mar-a-Lago. It was about 800 people. I’m telling you, every damn one of them every time Donald Trump’s name mentioned by anybody, standing ovation, cheers and so forth. 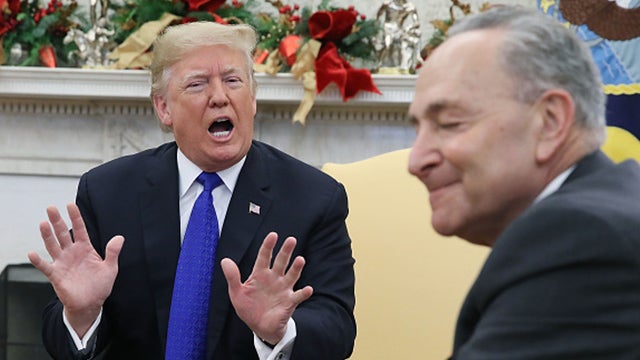 Trump’s base is solidly behind him. A lot of young people. In fact, this group is a group, Turning Point USA, of young conservatives, and there’s a bunch of them in town now for their annual convention. They have three, four thousand people over there at the convention or 2,500 something. It varies from year to year. I mean, this is another aspect of all this that they’re not talking about. He took Chuck and Nancy, those legislative experts, and he turned ’em back on their heels.

They look like deer in headlights in their press conferences yesterday and today, and Schumer is out there (impression), “This is not my shutdown! This is his shutdown! He knew this was gonna happen! It’s his shutdown.” No, it’s yours. It was very simple to avoid this. $5 billion? Come on! We’re talking a continuing resolution that’s got trillions of dollars in it. $5 billion? But it’s border security, and they won’t do it. Trump got people to do things that everybody in the swamp said was impossible, surprised them all.

They’re all ready to go home. Some of them are already at home celebrating Christmas. The Democrats were singing and dancing in victory on the floor of the House on Wednesday night, Pelosi singing and dancing at the bar. He got the House to vote for his funding when Nancy said it was impossible — and it was thanks to conservatives, the Freedom Caucus in the House, where this happened. So now it’s all the Democrats are on the hot seat. It’s now all the Democrats that appear to be putting politics over country.

It’s chump change to the Nth degree. They’re saying, by the way — and you’re gonna hear it in a moment — that Trump folded, that Trump caved to the pressure of conservative media voices. I say that Trump has been playing these people from the start. Starting in an Oval Office meeting with Chuck and Nancy. Starting with… In fact, no. Even before that. Right after the election, the day after the midterm elections Trump is out there saying… 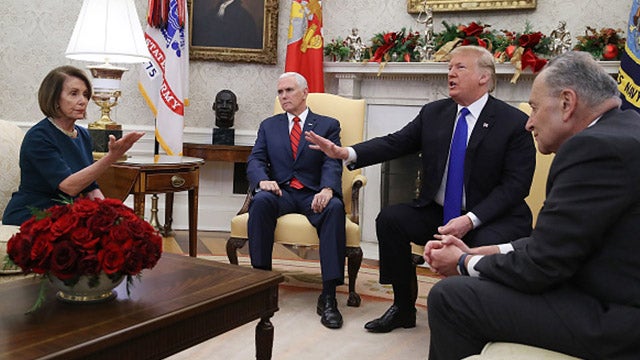 “I’m gonna own the shutdown. I’m not gonna just shut the government down. I’m gonna own it. I’ll be happy to own it. We’re talking border security.” They’re look at him like he’s an idiot, like he doesn’t mean it like he’s just posturing or else he’s a total blithering idiot, doesn’t know what he’s doing, trying to suppress their laughter, what have you. Like every other arrogant bully, they think they’re dealing with a neophyte idiot who doesn’t know the ways of the world, doesn’t know the way to behave in their world.

Well, take a look at the prison reform bill. That is a huge deal to everybody in that town. They love it and they don’t dare talk about it! I myself am not crazy about it, to tell you the truth. But they, in the Beltway, love that bill. It is a bill that every liberal has apparently been trying to get passed and failed since Obama! But it’s right out of something they want and always have wanted — and they don’t dare talk about it.

Because leftists will like hearing the details of what’s in this prison reform bill. And it happened… I made mention of this yesterday. It happened with hardly any effort at all, apparently, 87 votes in the Senate. There was none of this kind of contretemps involved in it like we’re having with $5 billion for border security, and this prison reform bill affects 180,000 people. The farm bill? The criminal justice bill? Bipartisan support. No mention whatsoever.