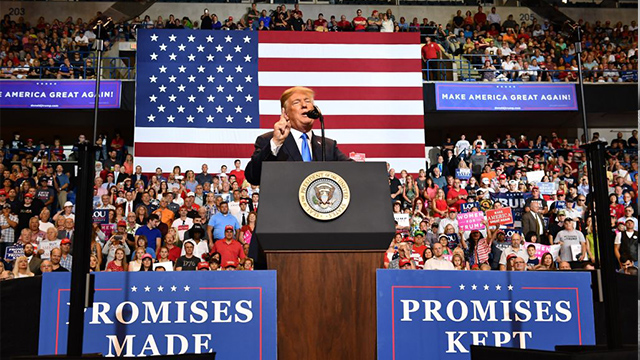 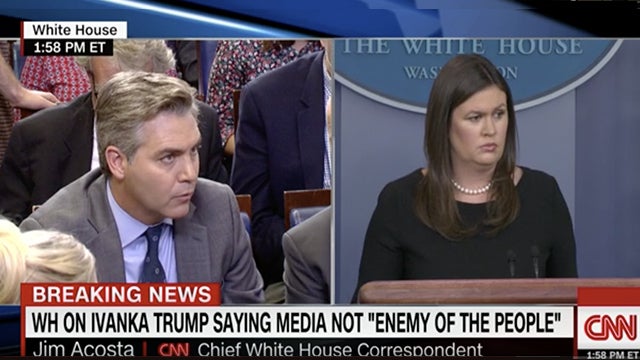 But that’s a fine point, because when the Drive-Bys report it, they don’t say that Trump said fake news is the enemy of the people. They report he says the entire media is. And they act outraged and act like they’ve been placed in great harm, great danger. And April, what’s her face, April Ryan goes out there after the press briefing and goes (imitating Ryan), “I’m really worried, I’m worried that Jim Acosta is going to be the subject of violence. I’m very, very worried.” 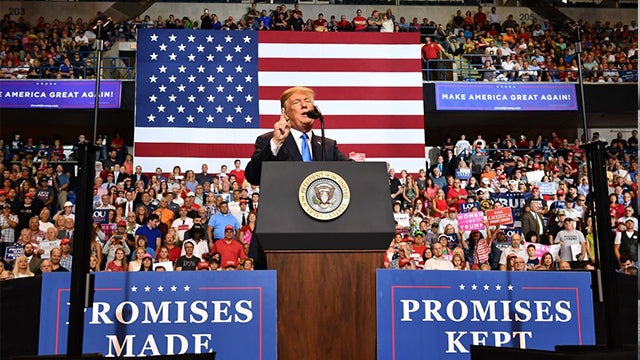 Oh, you mean like all the Republicans getting shot out there, April? So anyway, Trump at his rally last night decides to address an example of what he calls fake news. There are countless instances of Trump being lied about each day. But this is the one that he chose.

TRUMP: I was about 15 minutes early and I’m waiting with my wife and that’s fine. Hey, it’s the Queen, right? We can wait. But I’m a little early. So I then go up and meet the Queen and she is fantastic. It lasted for like an hour because we got along. So here was the story by the fake news. “The President was 15 Minutes Late for the Queen.” Wrong.

But because the Drive-Bys are so childish and so squeamish and so sensitive and so worried about being offended, they can destroy anybody. They can lie about people. They can accuse them of things that they haven’t done. But let them get called out for what they actually do and they lose it, as evidenced by Jim Acosta, sound bites eight and nine, Jim Acosta in the White House press briefing yesterday afternoon.

ACOSTA: I think it would be a good thing if you were to say right here at this briefing that the press, the people who are gathered in this room right now, doing their jobs every day, asking questions of officials like the ones you brought forward earlier, are not the enemy of the people. I think we deserve that.

RUSH: (imitating Acosta) We deserve that we’re not the enemy of the people. We go to war every day. We have to confront powerful people. And we have to ask them questions. And it was so bad during Obama that we had that — I mean, we didn’t want to ask him any tough questions because we didn’t want Obama to be mad at us, and so it was really tough. But now it’s really hard because we hate you. And we can’t wait to ask tough questions. And you, you won’t let us get away with it. And you’ve got to tell everybody that we’re not the enemy. You’ve got to tell everybody we’re not trying to destroy you.

And here’s what Sarah Sanders said.

SANDERS: It’s ironic, Jim, that not only you and the media attack the president for his rhetoric when they frequently lower the level of conversation in this country. Repeatedly, repeatedly the media resorts to personal attacks without any content other than to insight anger. The media has attacked me personally on a number of occasions, including your own network, said I should be harassed as a life sentence. That I should be choked.

ICE officials are not welcomed in their place of worship and personal information is shared on the Internet. When I was hosted by the Correspondents Association, of which almost all of you are members of, you brought a comedian up to attack my appearance and called me a traitor to my own gender. In fact, as far as I know, I’m the first press secretary in the history of the United States that’s required Secret Service protection. The media continues to ratchet up the verbal assaults against the president and everyone in this administration, and certainly we have a role to play. But the media has a role to play for the discourse in this country as well.

RUSH: What do you think the reaction to that was? The Drive-By media ripped into her. They ripped into her for being overly sensitive, for not telling the truth about things and not being big enough to deal with the hard aspects of the job. And meanwhile, Jim Acosta, they’re running around, “I was really afraid, I was afraid Jim was going to get beat up.” Then, of course, Jim goes back to CNN and acts like he deserves a Purple Heart and a Gold Star all for dealing with this.

If I worked at a place, a national news organization with a world-renowned reputation, I’m sitting there and I’m working there and I know that nobody’s — 700,000 — if I’m perennially in last place, I wouldn’t accept it. I would be very bothered by it. I would be worried about why it is the case. But you notice they’re not. They want a badge of honor. They don’t care if nobody’s watching, as long as they continue to stick it to Trump and speak truth to power, whatever that means to them.

Well, I swear, I’ve never seen a media organization that is so unaware and so unattached to its own audience and so ambivalent, uncaring about it. In fact, I don’t think CNN gives a whit about the public as the audience anyway. I think CNN’s audience is the other networks. I think the other networks, their audience is CNN. I think it’s a circle you-know-what. You cannot convince me that the people that run CNN, the managerial side or anybody in the executive branch, you can’t tell me that they have the slightest understanding of how to relate to an audience, to build an audience.