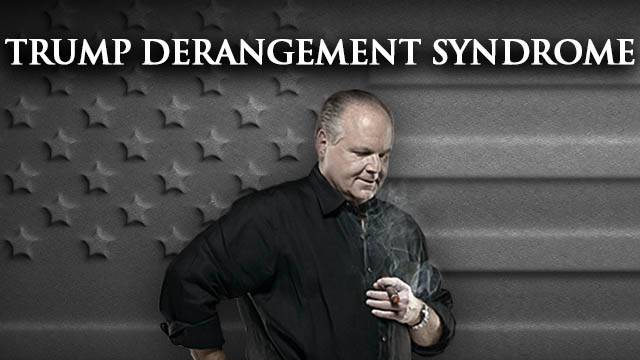 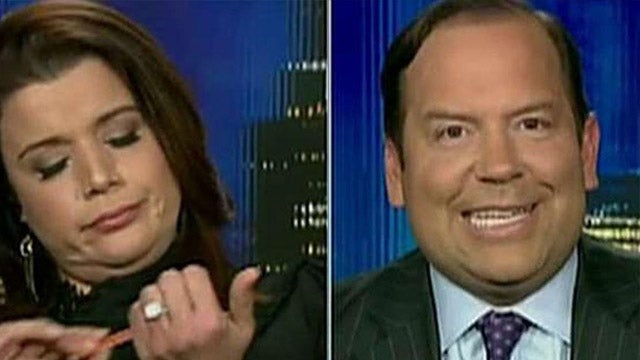 RUSH: So it’s not a crisis, right? It’s just a manufactured crisis. We know this is all bunk. By the way, there’s a link to a story up on Drudge, and I’ve gotta be very careful here. I’m not being critical. I’m being analytical here. There’s a story up on Drudge — I think it’s from the Grabien website — and it’s a good story. It is a list of all the things that cost much, much more than the wall will cost (much more than Trump is asking, $5.1 billion) that the Democrats have had no problem funding — and it’s oddball, weird stuff. 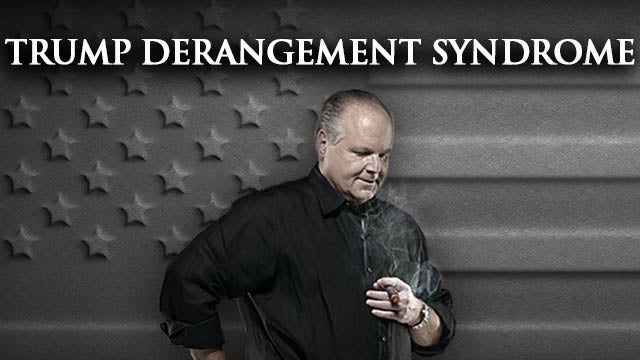 You know, it’s the mating habits of Australian rabid bats. It’s whether or not Eskimos still cheat on their wives. They’ve got studies for that kind of stuff. I’ve always said, “For half of the money you’re spending on that, I’ll blow the whistle on Palm Beach. You don’t have to go to Eskimos to study this.” But I wonder how persuasive it is anymore. I mean, this is a tactic that we have employed for I don’t know how long — the whole time I’ve been doing this radio show — and I just don’t know how effective it is.

I’m not suggesting not to do it. The stories are worthwhile, and they do provide interesting fodder for people that want to repeat the stuff on Twitter and Facebook and so forth. But I don’t think this is really about money, and I don’t think that anybody out there that’s paying any attention to this thinks it’s about money. I don’t think anybody thinks the Democrats think $5 billion is too much. It’s not about that at all. The Democrats have authorized more money for this (as we’ve just demonstrated) since 2005. It’s not about money.

Maybe you could embarrass them by pointing out all the crazy things they have agreed to fund. But hypocrisy, it never seems to stick to them — and I’m talking about in terms of actually persuading voters to realize that the Democrats are a bunch of skunks. It just never seems to work. Hypocrisy never attaches. It does to us, and the reason it does to us is because back in the old days of the family values party we’re out there talking about being moral and upright and this kind of thing.

So any time anybody in the conservative movement failed and was caught having an affair or getting a divorce, here came the Drive-Bys: “A bunch of phonies! Family values, my ass! Look what you’re doing,” and it all fell apart. Meanwhile, Bill Clinton can have an affair, can have all kinds of things going on in his underwear in the toilet in the Oval Office, and it really did not create any opposition to him from Democrats or from the media, because they were never held to the same standard.

It’s one of the reasons why the character debate on Clinton, I don’t think it was successful. It might have been important. It might have been necessary to do in terms of staking out our place and position in terms of things we think are important in a leader. But they just have never worked, because it isn’t about money. It’s gotten so bad that yesterday on CNN — and, look, don’t try to find the sound for this ’cause there is no sound to this.

Yesterday on CNN, a so-called Republican analyst or strategist or whatever, Ana Navarro, during a discussion about crime and murder and rape committed by illegal aliens began filing her nails in boredom. She essentially gave herself a manicure while the other guest was detailing the horrors of criminal activity engaged in by illegals. So it’s not even a crisis of murder and mayhem and crime, and whenever it came up here comes the supposed Republican analyst or strategist purposely acting bored and uninterested and essentially saying: 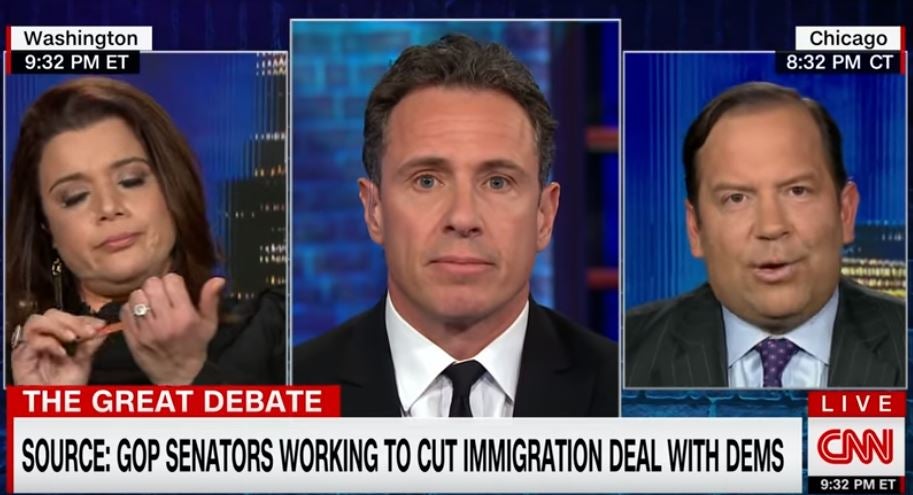 “You’re stupid. You’re crazy. This isn’t a problem! Illegals are no more criminal than anybody else coming into this country.” By the way, what about that comparison? This is another thing that the likes of Alexandria Ocasio-Cortez are saying, that the crime created by illegals is less per capita than crime committed by American citizens. A, I’ve looked. They’ve been touting this for I don’t know how long. I can’t find that statistic.

They’re just making that up. They’re just making it up. But what if it were true? It still doesn’t mean, “Okay, fine. Let ’em in.” There’s still the law that we’re dealing with that is being broken every day that nobody seems — on the left or in the media — to be concerned with upholding. So we come up with all these justifications for letting people in. “Yeah, they commit crime but not as much as Americans do per capita.”

Oh! So what? The country will be safer if we let in these thugs and coyotes and drug dealers? It will be safer if we let them enter the country illegally? Is that what they’re saying? It is what they’re saying! It’s on this kind of thing that I think we could be much more effective debating these people and rather than point out where the Democrats have authorized spending money that’s much more than for the wall, ’cause it isn’t about the money.

In other words, the Democrat Party needs to be portrayed and positioned as people who are perfectly fine with a distinct and unique American culture and our society being corrupted and perverted. The truth needs to be said about what the Democrats are doing. If they’re gonna sit there and act like it isn’t any big deal that illegal aliens routinely come in and commit murder, I’ll tell you this.

All the people that have been maimed and injured and killed by illegal aliens would today, more than likely, be unharmed if those illegals had not made it across the border — and there’s no other way you can argue that. The only way you could argue that is, “Well, Rush, that’s not true because the crime and the commission of crime by Americans is far greater per capita than among illegals.”

No. You can’t say that just because some illegals would not have committed the crime if they hadn’t been allowed to enter that others would have. You think Kate Steinle would still be dead, in other words, or some of these other people have been wantonly murdered? They would still be murdered even if we had closed the border and not allowed these thugs to enter? That’s basically what…

This is the position the Democrats have eagerly plotted for themselves. They seem perfectly happy to own this political position that nothing bad is happening because of open borders and that we need more of it and that they’re not concerned with the crime or the cultural rot and destruction that’s taking place. They aren’t concerned about the rule of law being violated every time somebody is invited to cross the border with impunity.

That’s the position they’ve staked out — and why? Not because they don’t want to spend money. It’s because they hate Trump. We’re watching Trump Derangement Syndrome literally do and inflict unnecessary damage to people in this country. Things are happening that would not be happening if we were simply obeying our own law and enforcing current immigration law.

Here is a story from Gaston County, North Carolina, at 10:30 today. “Three Illegal Immigrants Arrested With $200K Worth Of Meth In Gaston County — Gaston County police say they arrested three illegal aliens with $200,000 worth of methamphetamine in their possession. Christian Cabrea-Rivas, 36, Silvia Hernandez-Iturralde, 29, and Marco Tulio Ramos Garcia, 35, were taken into custody on Monday, Jan. 7 after authorities found them in possession of two kilograms of meth. Police say several children were present during the drug bust. They have since been taken into protective custody.

Cabrea-Rivas is a documented member of the street gang MS-13, which, according to the Democrats, there’s no MS-13, there is no gang. Trump is making this all up. This stuff would not be happening and to the people it’s happening to it’s real and it would not be happening if we were simply enforcing the law. But the hatred for Donald Trump — What’s being manufactured here is the political positioning to deny Donald Trump anything that might benefit him and his reelection bid in 2020 and ditto the Republican Party.

And the Democrat Party, as they always do, they’re making it plain as day that the citizens of this country are at the bottom of the list in terms of deciding what’s important and what’s not and who we’re gonna work for. They tout that the federal workers may not be able to make their mortgage payment. My God. They may be foreclosed on. Oh, my God.

Meanwhile, look at the pain and suffering being visited on innocent people by way of illegal alien immigrant thugs, and you don’t hear any compassion for those people from the Democrats. There is so much that they could be destroyed on, so much they could be exploited on. I hope Trump keeps playing these videos, keeps tweeting these videos of all these Democrats. And he’s doing it as he’s glad to have Obama’s support. It’s clever.