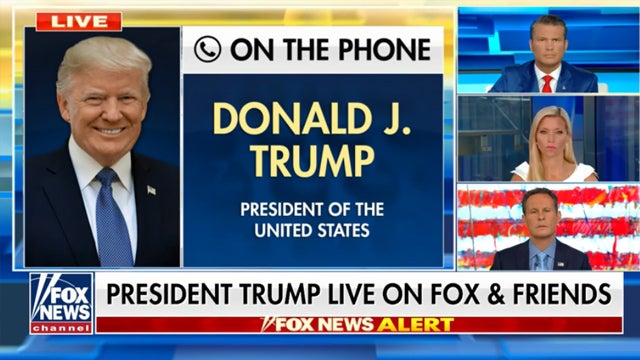 RUSH: Trump, by the way, did 59 minutes today off the cuff on the Fox News Channel with his buddies over there at Fox & Friends. And, folks, it was just amazing. You talk about somebody that is on top of his game. It was Donald Trump today with Fox & Friends. I’ve got some examples of it. You’ll see.

RUSH: Let me play for you some sound bites of Trump today on Fox & Friends. First bite we have, he’s explaining Black Lives Matter and sports and how they are associated and what these leagues — Major League Baseball, the NBA, the NFL, what they’re doing by engaging in all of the kneeling.

The question from Pete Hegseth, ” A couple of years ago you were very vocal about kneeling for the national anthem. Now it seems that standing is the new kneeling in that only three players, Jonathan Isaac and Leonard and Gregg Popovich are standing for the anthem.” Everybody else is kneeling. What is your take on it?

THE PRESIDENT: I think it’s disgraceful. I see everybody kneeling during the anthem. It’s not acceptable to me. When I see ’em kneeling I just turn off the game. I have no interest in the game. And let me tell you this. There’s plenty of other people out there too. They had Black Lives Matter. Where did it start? Marching down streets screaming, “Pigs in a blanket, fry ’em like bacon.” They are talking about policemen. All of a sudden this has taken on this air of great respectability. Well, how does it start there? It’s a Marxist group. It’s a Marxist group that is not looking for good things for our country.

Here, Drive-Bys. Doesn’t matter if Trump loses, he’s not leaving the Oval Office anyway. You just heard him say. He not worried about it. Let’s see what happens with that. You all know the drill here. So when it blows up, just laugh at it, have some fun.

RUSH: You know what Trump ought to say when they ask him if he’s gonna leave the White House if he loses the election? Because you know somebody’s gonna ask him this. Trump’s answer to that question should be, “Well, it’ll be what it’ll be.” Which of course is a future version of his “it is what it is.”

RUSH: Audio sound bite number 3. Here’s Trump. We have two more to go. This is Trump from Fox & Friends today. I just want you to hear how cogent, with it, collected, conversant, in command Trump is and knowing full well that Plugs isn’t. Plugs could not pull this off. Next question came from Brian Kilmeade. “On mail-in voting, if a state like Nevada or another state just blankets a state with ballots unrequested, that’s different from requesting an absentee ballot. Am I accurate in that?”

THE PRESIDENT: Absentee is okay because you have to go through a process and it’s a smaller number. What they’re gonna do is blanket the state and the post office will never be equipped to handle it. And you see it in New York in a much smaller scale. We have a congressional race, Carolyn Maloney. It’s been six and a half weeks now. They have no idea what happened. There are thousands of votes off. They’re missing votes. There are fraudulent votes. They have to do the election over. And the other thing is, the votes don’t have to be counted or tabulated until seven days after November 3rd. But it’s not gonna be seven days. It’s gonna be months or years. So Nevada, we’re in court. We’ll see how it works out. They plan to send these ballots to everybody that’s ever walked in the state of Nevada. It will be a disaster.

RUSH: You know, I don’t think most people know what the big difference is between an absentee ballot and a mail-in ballot. Do you? Do you know what the big difference is? ‘Cause Trump talks about it. He says, you have to go through a process with an absentee ballot. But do you know what that is? If you haven’t ever voted absentee, you may not know what it is. You might be sitting there thinking, “What’s the big deal? Mail-in, absentee? They’re both early voting. They’re both voting in advance.” 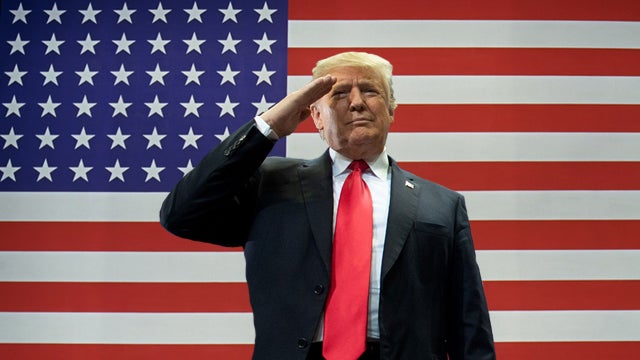 Let me tell you what the big deal is. And the fact that most people will not know this is a big deal because this is something the Drive-Bys are not telling anybody about this and it’s not complicated. Absentee voting requires that you provide proof of ID. You have to prove who you are. Mail-in voting, you don’t. Mail-in voting does not require any ID. That’s all you need to know, folks. And how many people do you think do know that?

Watching the news, watching the story go by, watch it be reported, the Drive-Bys, nobody points out that with a mail-in ballot you don’t have to furnish any ID. This is why when Trump talks about they can mail a ballot to anybody that’s ever established that they were in Nevada, guest at a hotel, strip show, whatever, and they can mail these ballots to anybody that’s ever stopped for 10 minutes if there’s a record of it. They’ve got the ballots, they can fill ’em out, send ’em back, nobody will ever know who they are.

Absentee, it’s just like showing up at the polling station. You’ve gotta prove who you are somehow. Not with photo ID. And that ought to be the first thing that people ought to have to do, that you have to show your ID card to everybody. Every polling place is different. On top of that, absentee ballots require that the voter request a ballot. That proves that they are at a current address, that they are presumably alive and cognizant.

Mail-in voting schemes like Nevada’s, everybody who was on the voter regulation rolls will be sent a ballot whether they’re still at a current address or not, whether they’re alive or not. None of that’s even checked. Which means that in November they’re gonna send ballots to at least 200,000 people who will be dead. Somebody will get some of those ballots and they’re gonna be filled out and sent back in. Those ballots can easily be harvested by Democrat operatives. And if the Republicans wanted to play the game, I’m sure they could get in on it too.

But they’ll be harvesting ballots from nursing homes and prisons, at least the people in nursing homes the Democrats haven’t killed with COVID-19. But that’s the big difference, folks. Absentee, you gotta prove who you are, you have to prove you’re alive, you have to request the ballot. Mail-in? Nothing of the sort is necessary. There’s no reason anybody ought to be supporting mail-in when they find out the Democrat Party is who’s pushing it.

RUSH: We have one more Trump sound bite here. This is audio sound bite number 4, and it is from the Fox & Friends interview today that went an hour. This request is from Ainsley Earhardt. She said, “What about the debates? The New York Times and Joe Lockhart are suggesting that Biden not debate you. You have others saying that all of a sudden it’s not a good forum, and they’re not in favor of these debates. Why do you think that is?”

THE PRESIDENT: They’re trying to get out. There’s no question about that, but, you know, we should have the debates. The one problem I have, the debate’s very late. It’s at the end of September and a lot of ballots will already be cast by that time. They want to make the debates as late as possible. The first debate should be before the first — at least before the first ballots go out, and they have it a month later — almost a month later. It’s ridiculous. Regardless of what it is, I’m ready to debate. I don’t care.

RUSH: Okay. Now, folks, the more I do here, the more gets added to the gotta-do-it list. They got Biden and whether he should debate or not. His wife is out there, “Of course he’s gonna debate.” Dr. Jill. “Of course my husband is gonna debate.” There’s action, there’s movement on whoever is vice presidential is gonna be. Biden confidants say that the choices are narrowing to Kamala Harris and Susan Rice. Now, both of those women, both of those women are Obama-approved hacks.