RUSH: Now, there’s contradictory polling data out there. The media is living off this Wall Street Journal/NBC poll that shows Biden up by 14, just like the same poll had Hillary up by 11 four years ago. But how about this from the Washington Examiner? “Trump Turnaround: Biden Lead Cut to 49%-47% as Coronavirus, Debate Don’t Hurt President.” 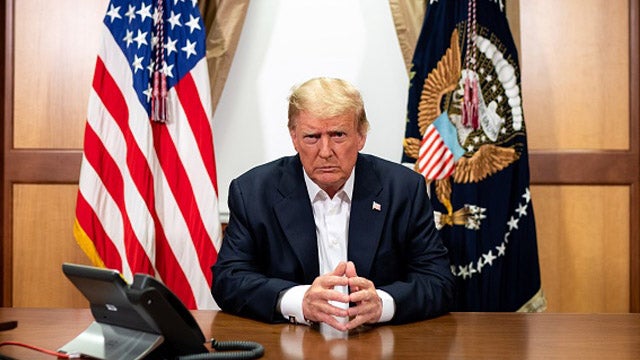 Now, this is a John Zogby poll, a John Zogby/EMI Research Solutions poll. “In the first post poll since President Trump announced that he had COVID-19, his chances of reelection surged, a sign that his infection and raucous debate performance didn’t hurt his chances for reelection. The new John Zogby Strategies/EMI Research Solutions survey shared with [the Washington Examiner] showed Biden up 49% to 47%, his smallest lead yet in their polls. In a four-way race –” You know, there are four people running out there. You just haven’t heard of the other two. “Biden leads 47%-45%, with 2% each for Dr. Jo Jorgensen of the Libertarian Party and Green Party nominee Howie Hawkins. The survey challenged the media’s narrative about Biden building his lead over Trump –”

You know what I think? It’s amazing. There are corresponding events. Now, follow me on this. Four years ago we had the NBC Access Hollywood video that happened right about the same time as Trump coming down with COVID this year. And what was the initial reaction? “Oh, my God. Oh, no. That’s it. It’s over. Did you see what he said on that — Oh, my God. That’s it for women. Oh, my God. It’s over.”

I got on the phone and I called the Trump campaign. And I don’t know if this had any impact. “Whatever you do, do not cave over this. The point is your voters, you’re not gonna lose a single one if you act the right way.” I said, “Your voters are sick and tired of this kind of crap introduced in the campaign, late in a campaign, they know full well that they’re the subject of this, they’re the focus, trying to get them to be turned off to you. Do not worry about it. Your voters are not gonna abandon you over this. They’re sick and tired of stuff like this. It has nothing to do with how you’ll be president, nothing to do with your policy. Nothing to do with what you’re gonna do about immigration or any of these things that they’re championing you for.”

And what happened in 2016, Access Hollywood allowed the campaign to take a stop, take a pause, they had a chance to assess and reassess. This is providing the same opportunity. And whereas Access Hollywood and what Trump said on that video did not hurt him, to the shock and surprise of the Washington establishment, they saved it, they thought that was it, everything else had failed, but that, the Access Hollywood, that was gonna be the end of Trump. And they could not believe it when it wasn’t. They couldn’t look it when it didn’t even hurt him.

COVID-19 has a lot of people paralyzed. COVID-19 has people afraid to go outside. Donald Trump has let it be known that he’s not going to let the virus get him or paralyze him. He’s not gonna allow it to prevent him from living. He’s going to live. He’s going to deal with things as they happen.

I also believe that there is — I don’t want to call it maybe a sympathy aspect to it, but there could be, the sympathy vote. But I also think that it may cause people to themselves pause and take a different look at Donald Trump. Aside from the social media gang, which is wishing for his death, remember, they are not America. Twitter is not America. The Democrats in the media believe it is, but it isn’t. I hear people that will pause and take a second look because most normal people do not wish anybody get this. They do not hope that people will die from it.

And the media’s eager to find those who want Trump to die and to publicize them and so forth, but they’re not a majority. Trump’s videos from inside Walter Reed Medical Center have been among his best. They have featured a guy who is likable, who is humble, or “umble,” as my parents used to say, and who has a lot of empathy. The videos have portrayed somebody who is a fighter, and everybody knows that, so it has provided further evidence of other things about him that people believe and know.

So, I think it has, contrary to the hopes and dreams of Democrats, I think this has, in a strange way — like Access Hollywood four years ago — I think it has the possibility of ending up a positive in terms of political fortune. It’s not good for the president that he’s got it. Don’t misunderstand. But he does have it. There is no way around that. And I think the decency and the goodness of the American people is something that would shock most Democrats.

RUSH: Okay. Here’s the president’s tweet: “I will be leaving the great Walter Reed Medical Center today at 6:30 P.M. Feeling really good! Don’t be afraid of Covid. Don’t let it dominate your life. We have developed, under the Trump Administration, some really great drugs & knowledge. I feel better than I did 20 years ago!” 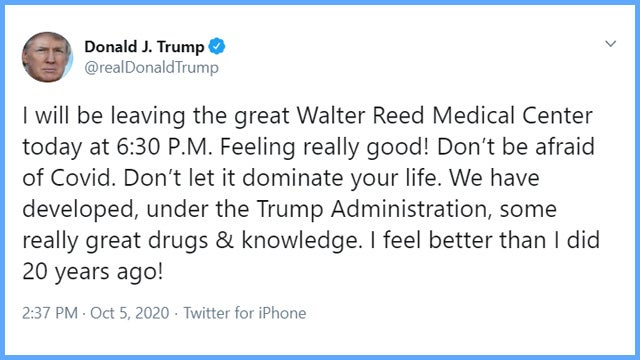 That is the full presidential tweet. Want to hear it again? (interruption) ” I will be leaving the great Walter Reed Medical Center today at 6:30 P.M. Feeling really good! Don’t be afraid of Covid. Don’t let it dominate your life. We have developed, under the Trump Administration, some really great drugs & knowledge. I feel better than I did 20 years ago!”

Well, there you have it. Keep a sharp eye, 6:30, the president walking out of there.

David “Rodham” Gergen was actually afraid of this very thing. Let me see. This was Friday. We had it. David “Rodham” Gergen worries Trump is gonna come bounding out of the White House in a few days saying, “I’m the guy who beat COVID and took it like a man.” Which means this scares the hell out of ’em. This scares the hell that Trump’s gonna do this. We’ll keep a sharp eye.